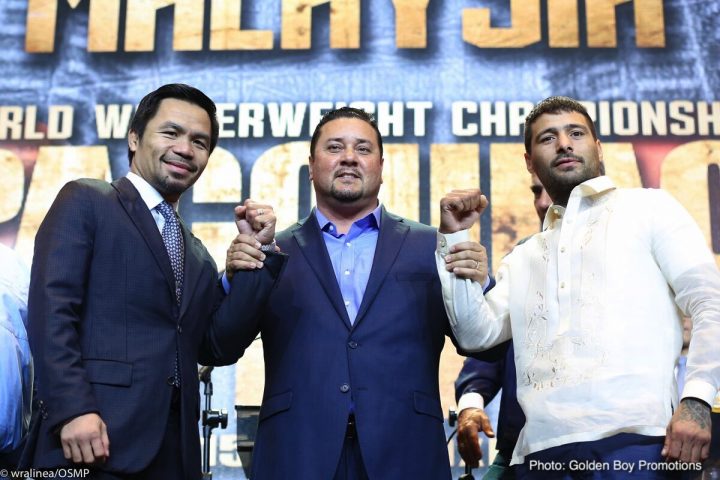 By Chris Williams: Lucas Matthysse is confident that he’s going to keep his WBA World welterweight title after he defends it this Saturday night against aging superstar Manny Pacquiao at the Axiata Arena in Kuala Lumpur, Malaysia.

This will be the first defense for the 35-year-old Matthysse of his WBA ‘regular’ 147 lb. title against the 39-year-old Pacquiao. These guys are going at it on ESPN+ in a fight that is frozen time capsule of a match that should have taken place 10 years ago. Thankfully, there are enough old timers that remember the two aging stars to make it a compelling fight for some boxing fans to watch. For the younger casual fans, they’ve shown very little interest in the Pacquiao-Matthysse fight. It hasn’t registered on the Richter scale with them. The younger fans follow the relevant stars like Keith Thurman and Errol Spence Jr. Pacquiao (59-7-2, 38 KOs) and Matthysse (39-4, 36 KOs) have become irrelevant due to inactivity and poor match-making. You can blame the inactivity on them, and the poor match-making on their promoters.

“I will bring the title back to Argentina,” Matthysse said to the Manila Bulletin at sports.com.com.ph. “But I am going to be 1-0 (in this fight).”

If Matthysse brings the same A-game that he brought against Ruslan Provodnikov three years ago in 2015, then it’s going to be tough night for Pacquiao. That version of Matthysse will make tough on Pacquiao, who hasn’t faced a big puncher since his win over Miguel Cotto in 2009. Pacquiao has fought plenty of excellent fighters since that fight, but none of them have been the guys with the heavy hands that Matthysse possess. The closest that Pacquiao has come to a big puncher like Matthysse in the last nine years is his fights against Shane Mosley, Juan Manuel Marquez, Antonio Margarito, Brandon Rios and Jeff Horn. None of those fighters are/were known as being huge KO artists. Marquez transformed his physique before his 2012 fight against Pacquiao, and he appeared to have more power than he had in his prior three fights with the Filipino star.

Matthysse wants to take Pacquiao’s scalp and add to his collection of fine pelts. Matthysse would like to take a win over Pacquiao and move forward to face the full WBA welterweight champion Keith ‘One Time’ Thurman (28-0, 22 KOs), who is still licking his wounds from his unification fight against former WBC welterweight champion Danny Garcia last year in March 2017. If Matthysse can catch Thurman while he’s rusty from inactivity, he could pull off an upset and take possession of the WBA Super World title. Beating Pacquiao and Thurman in back to back fights would be a huge accomplishment for Matthysse. He would turn his career around and become relevant again in the sport. The World Boxing Association is supposed to eventually start whittling down the number of champions they have at 147. This means they’re going to be order Thurman and Matthysse to face each other to eliminate one of the unnecessary titles. Matthysse beating the former eight division world champion Pacquiao will put the Argentinian in the position for bigger bouts against the likes of Thurman, IBF champion Errol Spence Jr., Danny Garcia, Shawn Porter and WBO champion Terence Crawford. Top Rank promoter Bob Arum would love to put together a unification fight between his fighter Crawford and Matthysse.

The loser of the Pacquiao vs. Matthysse fight is going to need to take a long hard look in the mirror to make a decision about their career. It might be pointless for them to continue fighting because the loss would be a sign that it’s over with. Matthysse and Pacquiao want to be involved in big fights, and it’s just not going to be realistic if they lose the fight. Pacquiao can always get a shot at fighting Crawford if he

loses to Matthysse, but that’s a bad career move for him and it wouldn’t be a fight that would attract the casual boxing fans. Crawford isn’t popular outside of his native Nebraska. No matter how many times Top Rank televises Crawford’s fights on ESPN, it’s unlikely that he’s going to become a popular fighter unless he changes his counter punching, switch-hitting style of fighting, which is hard on the eyes of a lot of boxing fans. The fans like to see brawlers like Pacquiao and Gennady Golovkin. Matthysse hasn’t become a star because he suffered losses to Danny Garcia and Viktor Postol in situations where he was on the verge of becoming a big name. The losses took the steam out of Matthysse’s career.

Matthysse will need to take the fight to Pacquiao to wear him down the way Jeff Horn did if he wants to win this fight on Saturday night. It doesn’t pay off to box Pacquiao and let the action be fought at a slow pace. The way to beat Pacquiao is to put nonstop pressure on him, throw hard leather and rough him up for as long as possible until he wilts.