Manny Pacquiao vs. Lucas Matthysse is ON, money is there 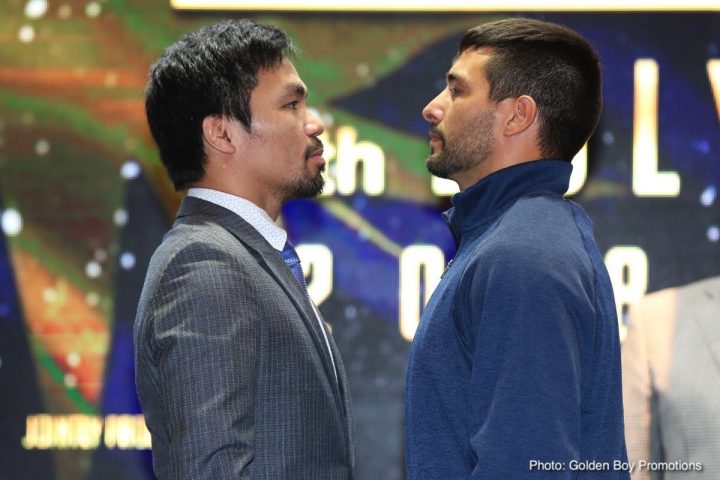 By Jeff Aranow: The financial backers have reportedly come up with the money for the July 15th title fight between WBA secondary welterweight champion Lucas Matthysse and former eight division world champion Manny ‘Pacman’ Pacquiao for their fight Kuala Lumpur, Malaysia. The fight has been jeopardy for many weeks due to doubts about whether the money would be there for it to go through.

Unlike Pacquiao’s other fights in recent years that has been handled by his experienced promoters at Top Rank, this fight has been handled by Manny Pacquiao Promotions and Golden Boy Promotions. Top Rank promoter Bob Arum has expressed doubts in the last three weeks whether the fight would happen due to the financials.

The Pacquiao-Matthysse fight will be staged at the Axiata Arena in Kuala Lumpur, Malaysia. It’ll be a long trek for boxing fans from the United States and elsewhere around the world. For Pacquiao’s boxing fans from the Philippians, it will be less of a hardship to have to make the long journey. In the last five years, Pacquiao’s former promoter Bob Arum has had him bouncing around the world for his fights. He’s had two fights in Macao, China, four fights in the U.S and one in Australia. Now that Pacquiao is promoting himself, he’s continuing with that tradition.

According to ESPN, the money for the Pacquiao vs. Matthysse fight has been paid to an escrow account for it to take place on July 15. This is obviously good news for the two fighters, as they no longer need to wonder whether the bout will happen or not. The 39-year-old Pacquiao(59-7-2, 38 KOs) has remained confident throughout, telling boxing fans that the fight will take place, but that’s done little to quiet the rumors circulating around that it wouldn’t happen. WBA ‘regular’ welterweight champion Matthysse (39-4, 35 KOs) is heading over to Malaysia on Tuesday to get ready for the fight. This is obviously a dream come true for the Argentinian Matthysse to face a star like Pacquiao this late in his career. It’s unfortunate for Matthysse that he’s facing Pacquiao when he’s no longer a pay-per-view attraction in the United States, because if this fight had taken place seven years ago, it would have been a big payday for Argentinian with the PPV upside he would have gotten.

There were deadlines that were missed for the money to be disappointed to make fight happen, according to Dan Rafael. The most important deadline was on Monday of this week, and thankfully the money was there for it to take place. Had the deadline been missed, the fight would have been off.

Pacquiao and Matthysse will be fighting each other on July 14 U.S time and July 15 in Malaysia time in Kuala Lumpur. Thus far, the interest in the fight by the boxing public worldwide has been low, as it’s not a great match-up for Manny. Rather than choosing to fight one of the younger welterweight world champions like Terence Crawford, Errol Spence Jr. or Keith ‘One Time’ Thurman, Pacquiao selected the 35-year-old Matthysse, who only recently captured the vacant World Boxing Association 147 lb. title last January in stopping little known, highly ranked #1 WBA Tewa Kiram in the 8

th round to capture the vacant title. Despite getting the victory, Matthysse looked far from sharp in the fight against the younger 28-year-old Kiram. Matthysse looked ring rusty and nowhere near as good as he’d been in his prime years of his career from 2010 to 2013. However, Matthysse’s enormous punching power was still there for him, and that was what carried him to victory once he was able to start putting hands on Kiram. Matthysse’s fight against the 40-ish Pacquiao could play out the same way. Matthysse will likely struggle early on with Pacquiao’s speed, movement and southpaw stance, but once he catches up to him, he could knock him out. That’s what Golden Boy Promotions CEO Oscar De La Hoya is expecting to happen. He believes that Matthysse will end Pacquiao’s 23-year pro career by beating him and sending him off to retirement. There are a lot of boxing fans that aren’t sure that Pacquiao will get the message to retire if he loses to Matthysse. They think that Pacquiao will stubbornly persist, and look to get fights against Amir Khan and other notable fighters that are potentially beatable. Khan, 31, has already made it known that he wants to face the winner of the Pacquiao vs. Matthysse fight. It’s unclear whether Khan will show interest in facing Pacquiao if he loses the fight to Matthysse.

“The fight’s a go. There were some bumps in the road but everything is now in order and we’re excited. It’s a great opportunity for Lucas,” Golden Boy Promotions president Eric Gomez said to ESPN.com. “This is his dream fight. It’s the fight he’s been talking about for five years now. Anytime you can fight a legend like Manny Pacquiao it’s a win.”

I’m not sure that I agree with Gomez in him calling the Pacquiao-Matthysse fight a “dream fight.” It’s late in the game for both of those fighters for their fight to be glorified in such a manner. Matthysse was knocked out by Viktor Postol in the 10th round three years ago in 2015. Matthysse suffered an eye injury in the loss, and he was out of boxing for two years until 2017. Since coming back, Matthysse has defeated Emmanuel Taylor and Tewa Kiram. Matthysse hasn’t looked sharp since coming back, and it’s likely that he’ll never be the fighter he was in the past. In Pacquiao’s case, he hasn’t fought in a year since his 12 round decision loss to Jeff Horn in 2017 in Brisbane, Australia. Pacquiao looked shot in that fight and he also looked unimpressive in his three previous fights against Jessie Vargas, Tim Bradley and Floyd Mayweather Jr. More importantly, Pacquiao is no longer the huge PPV attraction that he was during the prime of his career, and his paydays are much smaller now because of that. Pacquiao is no longer making $20 million per fight. That’s not going to change after Pacquiao’s fight against Matthysse on July 15. No matter how badly Pacquiao beats Matthysse, he’s not likely going to return to the status of a huge PPV attraction again.

“The money is in place. The money was supposed to be in an escrow account in the U.S. and now everything is good,” Gomez said about the Pacquiao-Matthysse money being in place for the fight to go ahead for July 15.

Pacquiao vs. Matthysse will be televised on ESPN or ESPN+, according to Arum. It’s likely going to bring in huge ratings on ESPN because Pacquiao is still quite popular with the casual boxing fans of the sport. What may help the fight be even bigger is unbeaten light welterweight contender Regis Prograis is fighting Juan Jose Velasco on July 14 on a Top Rank Boxing card on ESPN, and this could lead to the Pacquiao vs. Matthysse fight being shown afterwards. That would be great news for boxing fans because Prograis is considered by many as the best fighter in the 140 lb. weight division, and he’s quite popular with the hardcore fans, who have shown very little interest in the Pacquiao-Matthysse fight. Hardcore

fans want to see the best fighters facing each other. As popular as Matthsse and Pacquiao once were in their best years, they are no longer viewed as the best at 147. Having Prograis’ fight against Velasco shown before the Pacquiao-Matthysse fight could help attract fans to watch the Filipino star’s fight.

Matthysse says he never had any doubts that his fight against Pacquiao would wind up taking place. However, with the missed deadlines for the money to come through to make the Pacquiao-Matthysse fight happen, the match was very much in doubt until this week.

Pacquiao’s former promoters at Top Rank are handling the U.S television distribution of the fight on ESPN. The fight was supposed to be on ESPN PPV initially, but there were too many missed deadlines, according to Rafael. Instead of the fight being televised on ESPN, it’s heading to either ESPN or ESPN+. The undercard for the Pacquiao-Matthysse fight is filled with little known fighters that the casual boxing fans in the States has likely never heard of. It’s doubtful that any of those fights will be televised on ESPN. It’s more likely that the Prograis vs. Velasco fight will be the lead before the Pacquiao vs. Matthysse fight is shown on July 14.

With Pacquiao having been out of the ring for a year since his loss to Jeff Horn in July 2017 in Brisbane, Australia, it’s going to be interesting to see what he has left. Pacquiao looked terrible in the Horn fight, and now he’s been out of the ring for 12 months. That obviously isn’t going to help his game any. Matthysse has a real chance of winning this fight if he’s able to land enough of his hard power shots to hurt Pacquiao. Matthysse has always been a great finisher once he has his opponents hurt.