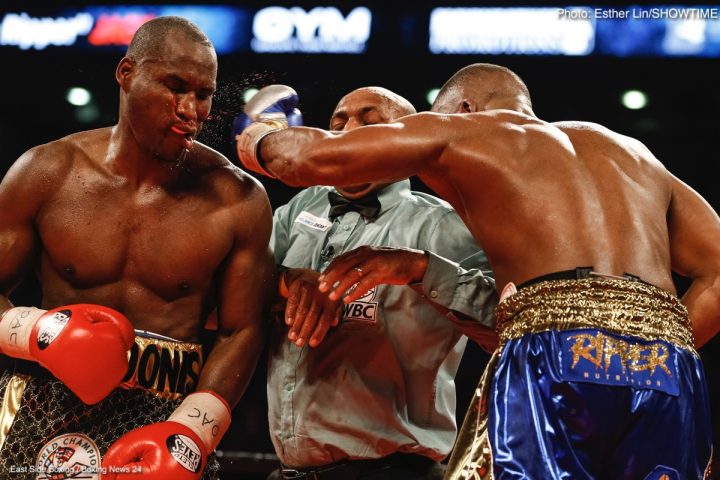 Initially the winning bid was $3.102 million by TGB Promotions, but they chose to withdraw their bid. Top Rank wasn’t happy about that, so they want a second purse bid. It’s now up to WBC president Mauricio Sulaiman to decide where to go next. Does he rule that Michel’s second place bid of $2.01 million is good enough for him to be the winner of Monday’s purse bid or does he order a second purse bid. It’s expected that Sulaiman will order a second bid. If not, then Michel plans on having Stevenson (29-1-1, 24 KO) defend against the 31-year-old Gvozdyk (15-0, 12 KOs) on November 3 in Canada. Stevenson, 40, would be receiving a 65-35 split of the purse for the fight.

“What happened was outrageous on Haymon’s part,” Gvozdyk’s promoter Bob Arum said to ESPN. “When Tom Brown wins and then he pulls his bid so Yvon gets it with the lower bid? That’s dirty pool. You win the purse bid and immediately say I’m passing? You can’t do that.”

The WBC could choose to cancel the winning bid and order a new purse bid. Of course, it might not matter. If Top Rank isn’t able to come up with enough money to win the purse bid a second time, they’ll still end up losing. It’s up to Top Rank if they want to put in a huge enough bid to win the second purse bid. Given that Gvozdyk isn’t a huge star in the U.S, I find it doubtful that Top Rank will win the second purse bid. Stevenson draws huge crowds in Canada, and there’s money to be made each time he fights. As such, Michel will likely outbid Top Rank a second time, and all of this controversy will be just useless static. Gvozdyk will wind up traveling to Canada and facing the arguably more talented southpaw Stevenson in front of his own boxing fans.

Gvozdyk is a good fighter, but he’s not shown the kind of talent that would enable him to defeat Stevenson. Gvozdyk has been hurt by lesser fighters than Stevenson; most notably in his fight against fringe contender Tommy Karpency in 2016. Karpency knocked Gvozdyk down in round 1 of that fight. It wasn’t a fluke knockdown. Gvozdyk was badly hurt, and the only reason he survived is because Karpency lacked the power to finish him off. Karpency continued to nail in rounds 2, 3 and 4.

Gvozdyk had no defense for the left hands that Karpency kept bouncing off his chin. Gvozdyk was forced to get on his bike and use movement to beat Karpency. Ultimately, Gvozdyk stopped Karpency in the 7th round, but it was a dreadful showing for the 2012 Olympic bronze medalist from Ukraine. In Gvozdyk’s last fight, he defeated 36-year-old Mehdi Amar by a 12 round unanimous decision last March to win the interim WBC light heavyweight title. Gvozdyk was briefly out on his feet in the 11th round after getting tagged by a hard left hand by Amar. Gvozdyk was lucky that Amar didn’t land a follow up right hand because he surely would have been finished off.

If the WBC chooses to leave Michel as the winner of Monday’s purse bid, then Arum will go along with it, according to ESPN. He wants his fighter Gvozdyk to fight for a world title against Stevenson. However, I’m not sure that Arum will still feel the same way about it after Gvozdyk finally does meet up with Stevenson, because that fight has early knockout written all over it for Adonis. Gvozdyk is a decent fighter, but his punch resistance isn’t what it needs to be for him to have a chance of beating Stevenson.

Moreover, Gvozdyk struggles badly against southpaw fighters, and he’s never fought anyone with near as much punching power as Stevenson. There’s a good chance Stevenson blitzes Gvozdyk by the 2nd round when this fight takes place. Gvozdyk may wind up as Andrzej Fonfara 2.0. Arum has no problems with doing the Stevenson vs. Gvozdyk fight in Quebec City in Canada. If Michel is deemed the winner of the purse bid by the WBC, the fight could be televised on Showtime Boxing. If they choose not to televise the fight, then Arum will look to have it shown on ESPN. If the WBC chooses to keep Michel’s winning bid in place, Stevenson will receive a purse of $1,229,085 and Gvozdyk will get $661,815.

Stevenson has taken criticism from fans for having made only one mandatory defense during his five years as the WBC 175 lb. champion. Stevenson made his only mandatory defense against Tony Bellew in 2013 in stopping him in the 6th round. Since that fight, Stevenson had defended his title seven titles. In his last fought, he fought to a 12 round draw against former two division world champion Badou Jack last May on the 19th in Toronto, Canada. Stevenson appeared to win the fight, but the judges ruled it a draw. Stevenson and Jack wanted to face each other in an immediate rematch, but the WBC stepped in and ordered Adonis to defend against his WBC mandatory Gvozdyk. Stevenson was able to steer around his previous WBC mandatory Eleider Alvarez by giving him step aside payments.

Stevenson vs. Gvozdyk will be a decent fight, but it’s doubtful that it will live up to the hype. For Stevenson to be given a real test, he needs to face Jack again and/or face the other light heavyweight champions Sergey Kovalev, Dmitry Bivol and Artur Beterbiev. Of those fighters, Bivol stands the best chance of beating Stevenson. Kovalev’s stamina is too poor, and he has problems taking body shots. Beterbiev doesn’t have a high enough work rate, and he’s not active enough to beat Stevenson. Bivol has the best chance, but it’s unlikely he’ll ever get a shot against Stevenson.