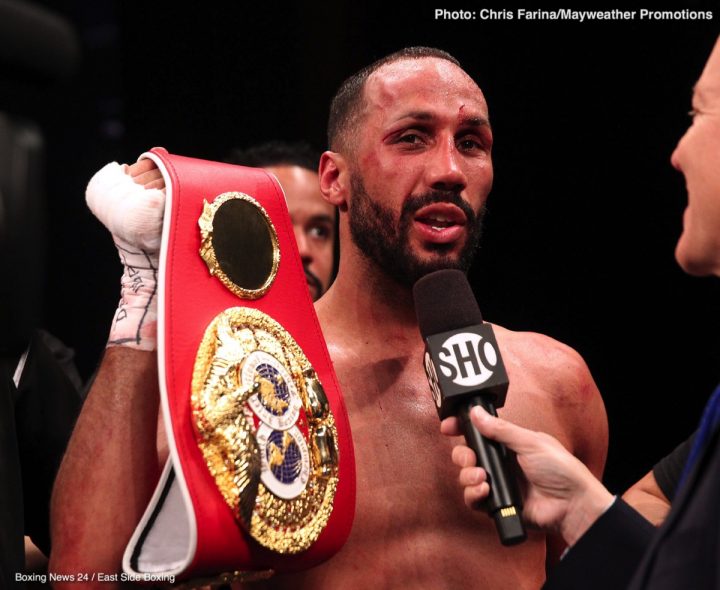 By Scott Gilfoid: James DeGale vacated his IBF super middleweight title on Wednesday in a move that many boxing fans believe was a way for him to avoid having to defend against a very dangerous IBF mandatory Jose Uzcategui (27-2, 23 KOs). DeGale (24-2-1, 14 KOs) is coming off of a controversial 12 round unanimous decision win over IBF champion Caleb Truax last April in Las Vegas, Nevada.

The move by DeGale to vacate his IBF 168 lb. title enables him to swerve the Uzcategui fight, which he’d been ordered recently to take by the International Boxing Federation, so he now can look to face the winner of the George Groves vs. Callum Smith winner. That’ll be a nice payday fight for DeGale to take. I mean, I can’t see DeGale beating either of those guys, but he’ll likely make more money against Groves or Smith than he would defending his IBF title and likely losing badly o Uzcategui. A bad loss for DeGale against Uzcategui would be game over for DeGale for all intents and purposes. His career is already on the skids after the way he performed against Truax in his last two fights.

Truax isn’t anywhere near as talented as Uzcategui in my opinion. It would be a likely massacre for DeGale to share the ring with Uzcategui. If DeGale were to be knocked out by Uzcategui, then that would make it much harder to see a fight between him and the likes of Groves or Callum Smith. You can argue that DeGale likely knows that he’s not the same fighter he once was, so rather than take the fight against the dangerous knockout artist Uzcategue and getting stopped, he chose to vacate the IBF title to avoid that ugly scenario. I think it’s safe to say that DeGale is cashing out before he gets taken out. Groves or Smith is the better option for DeGale once they finish facing each other in the finals of the World Boxing Super Series tournament.

DeGale vs. Groves will likely be a stadium fight in the UK. That means big money for DeGale. The fight will almost surely be televised on Sky Box Office PPV. The only negative for DeGale is he has to wait for Groves to face Smith first, and that means he could be on the shelf for a considerable amount of time waiting. I think it’s too risky for DeGale to face anyone in the super middleweight division while he’s waiting for the Groves fight, because the risk of him losing or looking absolutely dreadful is too high. DeGale looks so over-the-hill fight now that I don’t think he can beat even fringe level fighters in the 168 lb. division. I don’t think DeGale can be trusted to beat the bottom ranked contenders let alone the top talents like Uzcategui.

Now that DeGale has swerved the Uzcategui fight, the obvious fights for him to take to wrap up his boxing career are these guys:

if Groves loses to Smith, I see DeGale still winding up facing him.

Here’s DeGale’s statement on his decision to vacate his IBF super middleweight title:

“No World champion easily gives up their World title that they’ve earned the hard way in the ring and I’ve proudly held the IBF World title in two reigns with pride and distinction which is why it makes it very hard decision to relinquish the belt. It has been a pleasure to work with the IBF and I would like to thank president Daryl Peoples for allowing me to challenge and hold the distinguished belt that so many of the division’s great champions have held before for me. It has been a honor to be recognized as the IBF World Champion and I hope that by now vacating it will ease the transition to determine a successor between the Interim champion Jose Uzcategui and the next highly ranked available contender.”

The most likely contender that Uzcategui will face to fight for the now vacant IBF super middleweight title is #3 IBF Caleb Plant (17-0, 10 KOs). That should be a fairly easy fight for Uzcategui, as Plant has looked weak and pedestrian in his recent wins over Rogelio Medina, Andrew Hernande, Thomas Awimbono and Juan De Angel. Plant hasn’t stopped anyone in the last two years since 2016, and that’s a clear sign that he lacks the punching power to compete at the highest level in the super middleweight division.

The 32-year-old DeGale barely scraped by Truax in winning a close 12 round unanimous decision by the scores 114-113, 117-110 and 114-113. The fight showed that DeGale is not the same guy at he’d been previously. He lost something from his grueling 12 round draw against Badou Jack last year in January 2017. DeGale had been blaming his last two off performances against Truax on him coming back from shoulder surgery, but I think it’s painfully obvious that it’s more than just his surgery that has taken something away from his game. DeGale looked slower of hand and foot in his last two fights against Truax and his reflexes just aren’t there anymore. I hate to say it but DeGale looks TOTALLY shot to pieces at 32. The talent just isn’t there anymore. I can’t say that I’ve ever seen a fighter lose his game as fast as DeGale did. He went from being one of the best fighters in the 168lb weight division during his fight against Badou Jack to looking like a shell of his former self in his last two fights against Truax. It’s obvious that DeGale lost something from his game after his grueling fight against Jack in 2012.

”I’ve achieved so much in my career, Olympic Gold, British, European and International titles and two-time World Champion and I believe I’m at the top of my game right now,” DeGale said. ”I’m in the final phase of my career where I have a few good years left where I can be involved in massive fights and really leave a legacy in the division’s history. My team has been working very hard behind the scenes and we’ve got some very big and exciting news to announce soon.”

DeGale is clearly kidding himself by saying he has a “few good years left” in his career. That’s not the reality of DeGale’s situation. He has one or two good paydays left before his career is ready for the dust bin. It’s more likely that DeGale only has one good payday fight left before he’s done, because if he face Groves or Eubank Jr. in his next fight, he’s going to lose so badly to them that it’ll be almost impossible to match him against another popular UK fighter. I mean, if DeGale gets embarrassed by Groves, it’s going to be difficult to sell a DeGale-Eubank Jr. fight straightaway in his next bout. For DeGale to interest boxing fans in a fight between him and Eubank, he would need to get several wins over good opposition to redeem himself in the fans eyes. Unfortunately, I don’t DeGale is capable of beating any good contender at this point. I can’t see DeGale beating any of these fringe contenders:

DeGale should look to fight Eubank Jr. next, as he’s not scheduled right now and he’s coming off of an embarrassing 12 round decision loss to Groves. It would be better for DeGale to take the fight with Eubank Jr. than it would be for him to sit out of the ring for the remainder of 2018 waiting to face the winner of the Groves vs. Smith fight.


« What’s next for Dominic Breazeale?