By Sean Jones: A thinner looking Saul Canelo Alvarez is training hard for his September 15 rematch against middleweight champion Gennady ‘GGG’ Golovkin. Canelo’s focus on throwing body shots seems to suggest that he believes that the rematch with the 36-year-old is going to be conducted at close quarters rather than from the outside.

Canelo will be taking a significant risk if he chooses to stay in the pocket to throw body shots against Golovkin, especially if he’ weaker in the fight due to his weight and muscle loss. Canelo looked very muscular for his previous fight against GGG last September, and yet he stayed on the move for the duration of the fight. If Canelo is weaker and smaller in the rematch, it’s going to be risky for him to be stationary against Triple G.

Canelo’s career is still reeling from his two positive tests for the banned substance clenbuterol. It would look bad if Canelo loses to Golovkin, as the boxing public would point to the Mexican fighter’s two positive tests from last February and likely say that he lost because he didn’t have clenbuterol in his system. Canelo is in a must win situation for this fight in order for him to get his credibility back with the fans. Canelo has the advantage of youth, hand speed, defensive skills and home advantage for the rematch. However, Canelo is not the knockout puncher that Golovkin is, and he doesn’t possess the same stamina or size as him.

Golovkin’s specialty is to crush his opponents by pressing them with his huge punches until they wear down and get stopped. In the previous fight with GGG, which was ruled a controversial 12 round draw, Canelo was able to avoid getting worn out by using movement to minimize the punishment he had to take. Golovkin is planning on coming into the rematch with Canelo with an entirely different game plan. GGG and his trainer Abel Sanchez aren’t trying to disguise what they plan on doing in the rematch.

Sanchez is going to take Golovkin off his leash and have him overwhelm Canelo for three minutes of each round, and not give him any chance to breathe like he did last time. This means that if Canelo gasses out at the one minute mark in each round, he’s going to have Golovkin all over him, raking him with shots to the head and body. Canelo won’t be able to fall back to his previous strategy of running to his left to avoid getting worn down, because GGG will block his avenue of retreat. As such, Canelo will either have to stand and fight GGG for the three minutes of each round or else he’s going to need to be pulled out of the fight by his trainers Eddy and Chepo Reynoso to save him for another day.

The 27-year-old Canelo is working hard on his body punching in preparation for his second fight against the Kazakhstan fighter at the T-Mobile Arena in Las Vegas, Nevada. Canelo isn’t the only one working on throwing body shots. The bigger, stronger Golovkin is also working on making sure he hits Canelo with body shots in the rematch. Golovkin threw very few body shots in the first fight with him last year on September 16. Golovkin’s trainer Abel Sanchez says the reason he didn’t throw body shots is because the referee Kenny Bayless warned GGG early in the fight to stop hitting Canelo on the back when he’d go to the body. Canelo was twisting his torso to expose his back when he would see Golovkin targeting his midsection. Bayless didn’t realize that Canelo was turning his back to Golovkin, so he gave the Kazakhstan fighter a warning for throwing to the body. However, it looked like Golovkin wasn’t interested in staying close enough to throw to the body due to the risk of getting hit with Canelo’s speedy combinations and counter punches.

In video after video, Canelo (49-1-2, 34 KOs) is seen working almost exclusively on throwing body punches. Whether this is the actual plan for the rematch with GGG or a trick to throw him off is unclear. It’ll be a risky thing for Canelo to throw body shots to any extent in the rematch because that’ll leave his head unprotected for the powerful punches that Golovkin will be throwing back at him. In the previous fight with GGG, Canelo threw precious few body shots. One reason for that is because when Canelo did throw body shots, Golovkin came back with his big shots, and he didn’t like getting hit back. More important than that was Canelo’s poor conditioning didn’t enable him to fight long enough for him to do any significant damage.

Canelo’s youth advantage is irrelevant due to his poor cardiovascular system. He’s technically nine year younger than Golovkin, but in reality he fights more like a guy that is 10 years older than him. Canelo’s stamina is so poor that he’s more like a fighter in his mid-40s, and that’s not good for a fighter about to go against a fighter with the kind of punching power GGG possesses.

Hopefully the fight is fought cleanly without any dirty tricks like low blows thrown, head-butting or excessive clinching being used by Canelo. You just never know what Canelo is going to do because he no longer has the element of surprise working for him in the second fight when it comes to him using movement and fighting on the ropes to keep from getting ground to pieces by GGG.

It’s going to be tough for Canelo in the rematch due to everything that happened in the first fight with the boxing world thinking he was given a gift draw from the Nevada State Athletic Commission assigned judges, and then his two positive tests for clenbuterol. Canelo basically lost the first fight by Golovkin, so it’s going to be tougher for the Mexican fighter in the rematch because he’s going to need to be able to make adjustments to improve his performance from the last time. You have to believe that Golovkin will be a lot better in the second fight than he was in the first one because he plans on forcing he fight on Canelo. That’s going to make things a lot harder for Canelo if he hasn’t fixed his stamina problem, which at this point doesn’t seem to be something within his control. Some things can be fixed by a fighter in terms of game plans and technical issues, but a fighter can’t fix their poor cardiovascular system if this is a problem that’s always been there from day one. Canelo has had poor cardio since he was a teenager, Now that he’s heading towards 30; his cardio appears to be getting worse.

Golovkin will likely be making sure he throws a lot of body shots in the second fight with Canelo because these are punches that are the easiest one for him to connect with. It’s not going to be easy for GGG to land his heads because the 5’8” Canelo uses a lot of head movement and he rolls with the punches to take the steam off of them. The punches from Golovkin that Canelo can’t avoid are body shots, and those are the ones that GGG is likely going to be throwing as much as possible. He’ll look to wear Canelo down with shots downstairs in order to get him to drop his guard so that he can hit him with a head shot that takes him out. 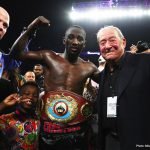