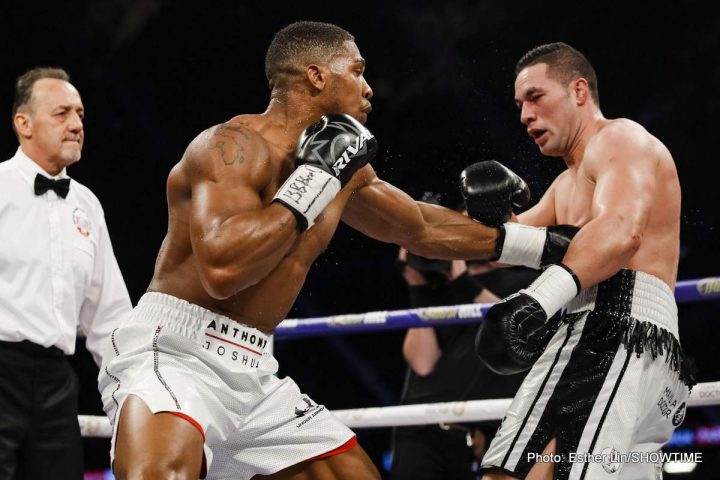 By Scott Gilfoid: Anthony Joshua has signed a new three-year deal with Eddie Hearn’s Matchroom Boxing in continuing to stay with the same promoter he’s been with since he first turned pro in 2013. With perfect matchmaking, Hearn has led Joshua to capturing the IBF, WBA and WBO heavyweight titles against largely sub-par opposition.

Hearn’s failure to make the biggest fight in boxing against WBC heavyweight champion Deontay Wilder is a real negative unfortunately. Question: Is Joshua pleased that Hearn couldn’t make the Deontay Wilder fight? Some fans feel that Joshua really doesn’t want the fight against Wilder. Whatever the case, the timing of Joshua re-signing with Matchroom for three more years is an odd one to say the least.

The bad news is Joshua won’t be facing Wilder next. He’ll be taking a much smaller fight against Alexander Povetkin (34-1, 24 KOs) on September 22 at Wembley Stadium in London, England. The rationale for Joshua being matched against the 38-year-old Povetkin instead of Wilder is because he would have been stripped by the World Boxing Association if he had continued to negotiate the fight with the 6’7” Deontay. Is that reality or is just an excuse by Joshua and Hearn for swerving the dangerous Wilder? Many fans believe that the WBA WOULDN’T have stripped a popular fighter like Joshua if he and Hearn had told them to let them continue the Wilder negotiations.

It’s a huge a disappointment for fans that Joshua isn’t facing Wilder on September 22. However, it comes down to whether Joshua truly wants the fight with Wilder or not. If Joshua doesn’t want to face Wilder, then Hearn has done a bang up job of fumbling the negotiations by giving Wilder a flat fee offer of $15 million instead of a percentage deal. But if Joshua really wants the Wilder fight, then Hearn has failed miserably at putting together the fight. In that case, it might have been better for Joshua to have moved on down the road to another promoter that can work on getting the fight done. Wilder isn’t the only one that Hearn hasn’t matched Joshua against. Luis Ortiz has been ignored by Hearn, as was David Haye before he lost twice to Tony Bellew. Those are all fights that should have been made but weren’t by Hearn.

“When I decided to become a professional boxer I felt the boxing market was stagnate and in need of new energy, both Matchroom and Sky have backed me and have given me opportunity after opportunity and I will always deliver,” Joshua said this week to Matchroom Boxing. “They’ve worked very hard to give me a platform to showcase my skills and tell my story. So choosing to renew our deal was always a matter of when not if. We have created history together and we are dedicated to keeping the UK scene in high demand for all boxers and boxing fans, but for me personally, the journey is nowhere near finished yet.”

Hearn did a good job of getting former IBF heavyweight champion Charles Martin to come over to the UK to put his IBF belt on the line against Joshua in 2015. The 6’5” Martin won the title after Vyacheslav Glazkov suffered a right knee injury in the 3rd round in their fight on January 16, 2016. If not for that injury, Martin likely would have lost the fight to the Ukrainian fighter. Hearn later matched Joshua against a 41-year-old Wladimir Klitschko, who hadn’t fought in two years and was coming off an embarrassingly one-sided loss to Tyson Fury. Joshua was able to beat the old and ring rusty Klitschko to win the vacant WBA title. Just why the World Boxing Association agreed to let their WBA title be on the line for a fight between the ring rusty Wladimir and Joshua is the big question. With all the available contenders in the division, it doesn’t make sense that the WBA didn’t insist on one of them facing Joshua for the WBA title instead of Klitschko. As it was, Joshua was almost knocked out by Klitschko in the 6th round. You can argue the only reason Joshua wasn’t stopped was Klitschko’s bumbling decision to try and win the fight by a 12 round decision rather than finishing off the badly hurt Joshua in the 6th and 7th. After Joshua captured the WBA title against the past his best 41-year-old Wladimir, Hearn put together a deal for him to face WBO heavyweight champion Joseph Parker in Cardiff, Wales last March. The referee that worked the Joshua-Parker kept both fighters from fighting on the inside, which allowed bigger, taller and longer-armed Joshua to control the fight from the outside with his jab. Not surprisingly, Joshua won the fight by a 12 round decision. Would Joshua have won the fight if a different referee had worked the Parker contest? We’ll never know. All we know is the referee that worked the didn’t allow the two of them to work on the inside, and that favored the taller fighter Joshua.