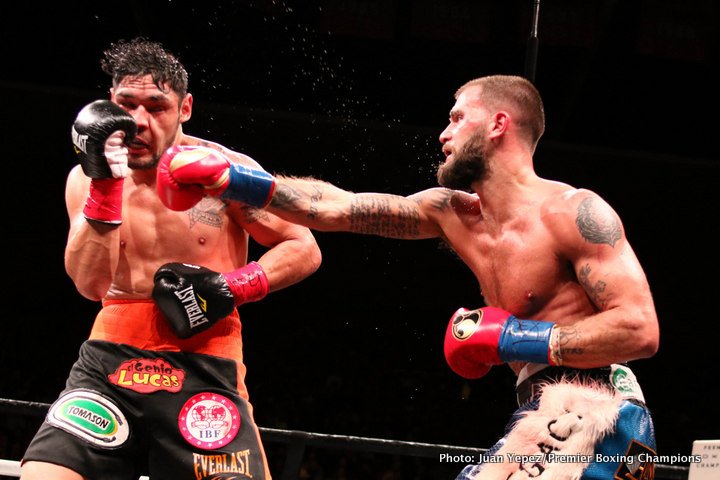 By Dan Ambrose: A fight is in the works between IBF super middleweight champion Jose Uzcategui and IBF mandatory challenger Caleb Plant for August 24 in Minnesota on FSI, according to Steve Kim. Plant (17-0, 10 KOs) is expected to be the underdog against Uzcategui.

If the fight gets made this will be the first title defense for the 27-year-old Uzcategui (27-2, 23 KOs) of his International Boxing Federation 168-pound title that he won outside of the ring on July 4 after previous champion James ‘Chunky’ DeGale decided to vacate the IBF title after being ordered by the sanctioning body to defend it against Uzcategui.

DeGale said he wanted to go after bigger fights; one of which is a match against the winner of the September 28 fight between George Groves (28-3, 20 KOs) and Callum Smith (24-0, 17 KOs) in the World Boxing Super Series final. DeGale can make good money fighting the winner of the Groves-Smith fight, especially if it’s WBA Super World super middleweight champion Groves that emerges as the winner of that fight.

Uzcategui won the interim IBF 168-pound title I stopping Andre ‘Matrix’ Dirrell in the 8th round on March 3 in their rematch. Uzcategui looked impressive in dealing with Dirrell’s hand speed advantage. It was a different Uzcategui than the one that we saw in his first fight against Dirrell on May 20th last year. Uzcategui lost by an 8th round disqualification after he kept punching Dirrell after the 8th round ended. Dirrell fell down after the bell, and the referee Billy Clancy had no choice but to disqualify Uzcategui.

Plant is a good fighter, but he might not have the punching power or the chin to hold up to the vicious firepower from the Uzcategui. In the past, Uzcategui was more of a straight ahead slugger, who was exposed by Matt Korobov in losing a 10 round unanimous decision in 2014. However, Uzcategui has dramatically improved his game in the last four years to the point where he’s now a top notch boxer/puncher. Uzcategui would be a real threat to the other super middleweight champions David Benavidez, Gilberto ‘Zurdo’ Ramirez and Rocky Fielding. Plant will need to figure out a way to keep Uzcategui off of him, because he’s not going to last long if he has to stand and trade with the Venezuelan fighter on August 24.