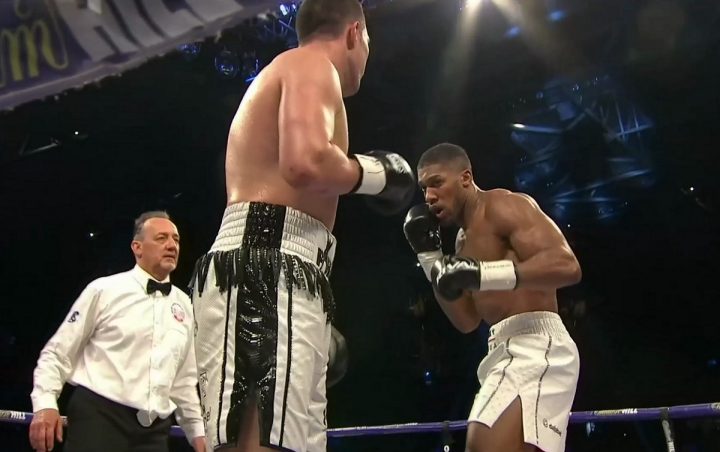 By Scott Gilfoid: Anthony Joshua took to his social media site today to post a photo of himself upside down, saying that he’s still waiting for a signature. IBF/WBA/WBO heavyweight champion Joshua (21-0, 20 KOs) and his wily promoter Eddie Hearn are both waiting for WBC heavyweight champion Deontay Wilder to agree to the $15 million flat fee offer given to him, which he’s no longer interested in accepting for a fight next year on April 13 at Wembley Stadium in London, England.

Wilder wants a 50-50 purse split deal before he puts his ink on a contract for the Joshua fight. Wilder isn’t being greedy. He just wants a 50-50 deal. He’s not asking for a bigger split. He wants to make the fight and he’s not looking to price himself out and move on to weaker opposition like we’re seeing with Joshua, who will now be fighting Alexander Povetkin. If Joshua and Hearn make a fair deal to Wilder, then they’ll get the fight.

”Sorry for not posting in a while.. I’ve just been hanging around waiting for a signature #AJBXNG,” Joshua said on his Twitter account.

Joshua is talking big name that the negotiations for the Wilder fight are officially over with. It looks to me like the A-side is afraid of the B-side. Joshua’s boxing fans say that he still wants the fight. He just didn’t want the $50 million that would have required that he come to the U.S to fight outside of his comfort zone. I don’t know. When was the last time you heard a fighter turning down $50 million or a fight? It looks bad on Joshua’s part to turn down all that cash for the fight. Moreover, Joshua walked away from Wilder and is now facing Alexander Povetkin for far less money. Joshua and Hearn chose Povetkin over Wilder. What’s wrong with this picture?

Joshua turned down the huge $50 million offer from Wilder’s management for him to come to the U.S to fight him. It’s thought by many boxing fans that Joshua and Hearn simply don’t fancy the fight against the dangerous 6’7” KO artist Deontay due to his game-changer of a right hand. Joshua’s defense has always been leaky, his chin fragile and his stamina poor. If Joshua fights Wilder, he’s going to need to take many huge right hands from him in order to have any chance of beating him. But if Joshua can’t take the kind of power that Wilder dishes out, it’s game over. That might be the reason why Joshua chose to reject the $50 million offer to fight Wilder. Team Wilder offered $50 million plus a rematch clause for Joshua in case he gets starched. In return, Joshua and Hearn made Wilder a $15 million offer with NO rematch clause. Does this sound like someone that wants the Wilder fight? I smell fear from AJ and Hearn. They know what could happen once Wilder lands one of his howitzer right hands on Joshua’s chin. Wilder’s deal is a heck of a lot better than the $15 million with no rematch clause deal that Joshua offered to him. The contract that Joshua sent to Wilder reportedly had no location. The rematch clause was a one-way job with it only working for Joshua.

Hearn said last week that Wilder will NEVER get the 50-50 deal that he’s asking for, and that the $15 million won’t be increased.

”If he doesn’t want $15 million anymore…we can only say, no,’” Hearn said to Fighthype about the $15 million flat fee offer to Wilder. ”The offer is an offer. IT’S NOT CHANGING.”

So there it is. Hearn saying the flat fee offer of $15 million to Wilder is all he can get and all he can hope to get. Never mind that the fight could pull in $100 million, Wilder is expected to get only $15 million and

Joshua all the rest. Some deal, eh? I hope Hearn doesn’t hold his breath waiting for Wilder and his team to sign on the dotted line for the Joshua fight with that lowball offer, because I don’t see it happening in this lifetime.

It’s just wrong that Joshua and Hearn gave Wilder a flat fee. This is a fight that needs to happen, and there’s no way that Wilder is going to agree to an insulting flat fee offer when he’ll be helping bring in a lot of boxing fans and PPV buys on Sky Box Office.

After the way Joshua’s last fight played out against WBO champion Joseph Parker with a referee that prevented inside fighting, I think it would be best for the Wilder-Joshua fight to take place in a neutral venue. If Wilder eventually does agree to fight Joshua, it would be unfair to him if he agreed to come to the UK. I don’t know that it would be a good deal for Wilder to fight in the UK if he doesn’t want to put himself in position where he could be on the receiving end of a controversial loss. Hopefully when the negotiations for the Joshua-Wilder fight resume next year, Wilder’s management not only hold out for the best deal in terms of a purse split, but also they insist on having the fight take place in a neutral country. There’s no point in Wilder agreeing to the fight if he’s going to wind up losing the fight potentially by a controversial decision.

It sounds like the Wilder vs. Joshua fight will never take place, as long as Hearn is offering only $15 million and not giving Deontay a percentage deal.

Wilder says he’s working his way to beating Rocky Marciano and Floyd Mayweather Jr’s record by going 51-0. Former heavyweight champion Marciano finished his career with a 49-0 record. Last year, Mayweather broke the record by going 50-0 in beating UFC fighter Connor McGregor, who was making his pro debut in a boxing ring. The Nevada State Athletic Commission counted the victory as a real one and not as an exhibition match, even though McGregor’s record going into the fight with Mayweather was 0-0. Wilder won’t do the same thing in cherry-picking opposition the way that Mayweather did when he looks to break the 50-0 record.