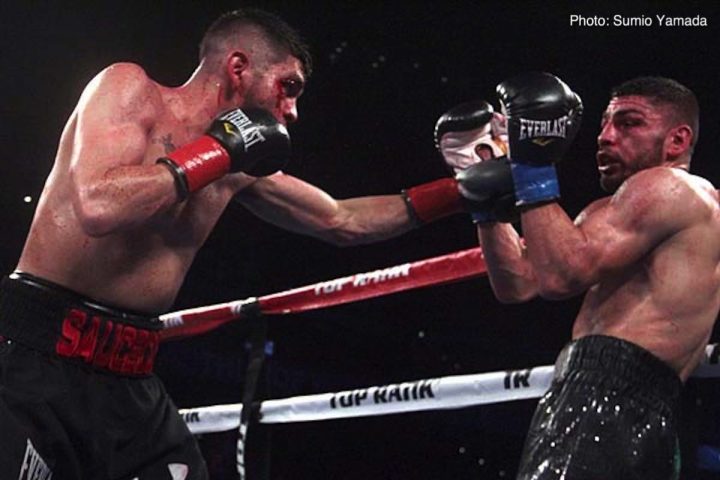 By Chris Williams: A fight between #1 WBO Alex Saucedo (28-0, 18 KOs) and WBO light welterweight champion Maurice Hooker (24-0-3, 16 KOs) is in the works for November, according to RingTV. Saucedo’s goal is to beat the 28-year-old Hooker and then face WBC light welterweight champion Jose Carlos Ramirez in a unification fight between the two Top Rank fighters. It would arguably be two paper champions facing each other rather than fighting the best.

To no great surprise, the Top Rank promoted 24-year-old Saucedo WON’T enter the World Boxing Super Series 140 lb. tournament. In that respect, Saucedo will be following fellow Top Rank fighter Jose Ramirez in not entering the WBSS tournament where he would need to mix it up with the most talented fighters in the division like Regis Prograis, Josh Taylor, Kiryl Relikh and Ivan Baranchyk. As much trouble as Saucedo had in beating fringe contender Lenny Zappavigna last month by a 7th round knockout on June 30, it would be a mistake on his part to mix it up with the far better fighters like Prograis.

Saucedo would likely be chopped to pieces by Prograis, Taylor, Relikh and Baranchyk. The same goes for Jose Ramirez, who won’t compete in the WBSS tournament either. I guess you’ve got to know your limitations.

“That’s the goal, go for the WBO first,” Saucedo said to RingTV.com. “Once I take that, I would love to unify with Jose Ramirez. I definitely want the fight to shut (Mirigian) up.”

Rick Mirigian is Jose Ramirez’s manager. He’s been doing a little trash talking on social media in saying that Saucedo shouldn’t mix it up with Ramirez after the trouble he had in beating Zappavigna last month. Saucedo was within an eyelash of being knocked out in the 4th round by Zappavigna. It was lucky for Saucedo that referee Gerald Ritter chose to leave him in there because a lot of referees would have stepped in and halted the fight in a similar situation.

Saucedo took awful punishment in the 4th round against a guy that he shouldn’t have been getting pummeled by. Zappavigna is a decent fighter, but he would have been utterly destroyed if he’d fought Regis Prograis, Relikh or Josh Taylor. Saucedo struggling against Zappavigna showed how limited a fighter he is.

Saucedo is Hooker’s World Boxing Organization mandatory challenger. Saucedo will be getting a title shot if they can negotiate the fight for November. Hooker is coming off of a 12 round split decision victory over former WBO lightweight champion Terry Flanagan last June in Manchester, England. The win for Hooker was an upset, as he came into the match an underdog going into the UK to fight Flanagan in front of his home boxing fans. Hooker used his height and reach advantage to dominate Flanagan from the outside to pound out a 12 round decision.

It’s a weak move on Saucedo’s part not to enter the World Boxing Super Series 140 lb. tournament, but perhaps it’s for the best. I don’t think Saucedo would even get past Baranchyk, who is like a younger, stronger version of Zappavigna.