Weekend preview: Fury vs. Seferi, Charlo vs. Trout, Santa Cruz vs. Mares and Crawford vs. Horn 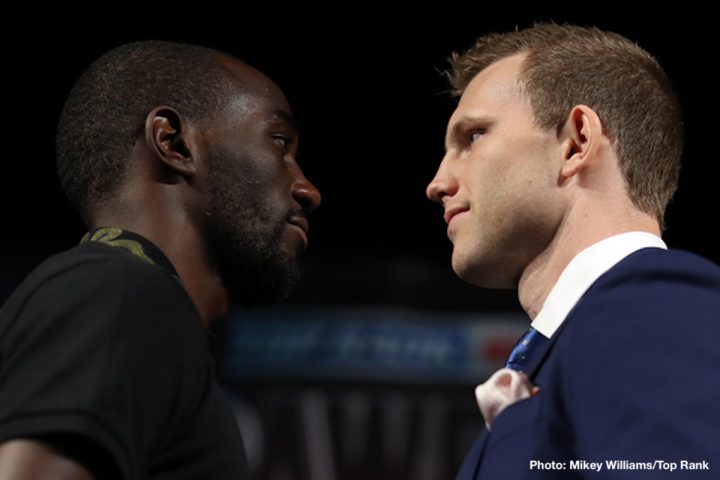 By Gerardo Granados: A great boxing weekend nears, so we the fight fans should get ready to enjoy fights that fit all type of fans and boxing taste. This upcoming weekend has it all, be it brawlers, punchers, boxers and boxer punchers or title fights, paper belts, champions, former champions and young hungry lions on the rise.

I guess the hardcore fight fans all already have chosen the fight we want to watch as well as we have picked the winners, but none the less for the rest of fans who might need a hint on the upcoming fights I wrote this piece.

According to the importance and potential, I have the comeback of the former Heavyweight Champion of the World Tyson Fury vs. Sefer Seferi on the last place. This fight offers very little to know if Fury still is the one who beat Wladimir Klitschko. No disrespect meant for Seferi but he is not just too small but he also simply belongs to a different level of competition to allow us to know Fury´s physical state. Did Fury kill himself by shedding all that huge tonnage? Can Seferi represent any danger for Fury? Is it worth the time to watch the comeback?

When Muhammad Ali came back after his three-year suspension, he fought Jerry Quarry who was a real heavyweight. George Foreman picked an unknown journeyman named Steve Zouski, but Big George had a long ten years layoff. After four years out of the ring, Mike Tyson fought journeyman Peter McNeeley who looked and had the build of a big heavyweight. After four years out of the ring mostly due to various injuries, Vitali Klitschko fought Samuel Peter who was the reigning WBC titlist. There is no need to add any extra word on the Fury vs. Seferi bout, but I think that perhaps the Terry Flanagan vs. Maurice Hooker can save the night at the MEN Arena.

The Jermell Charlo vs. Austin Trout undercard bout at the Staples Center doesn’t leave much left to know, but still, it will have good action whilst it last. I see Charlo dominating a willing Trout but Austin´s experience won’t be enough against a young lion on the rise. It’s true that Trout has faced and has been competitive against top opponents as Miguel Cotto, Saul Alvarez, and Erislandy Lara but it is also true that Trout is no longer the same fighter who once faced them. In his last three bouts Trout has previously lost twice challenging the super welter IFB strap, once to Jermell brother Jermall Charlo and also against Jarret Hurd, in both times Austin lost, but after only one win against a fringe unknown journeyman now Trout gets the chance to dispute the WBC super welter belt.

At the main event at the Staples Center, Los Angeles, California, the unification and also rematch between featherweight World Boxing Association “Super World” titlist Leo Santa Cruz and the featherweight World Boxing Association “World” belt holder Abner Mares should steal the attention of the hardcore fight fans. If you want to watch an entertaining fight full of action this is the one you must watch. I think this fight is going to be very competitive from start to finish and the hunger and determination will play a major role in who wins. I guess Santa Cruz should win a hard-earned Split Decision but I am certain this fight won’t be so easy to score.

The main event of the weekend must be held at the MGM in Las Vegas when the brave Aussie Jeff Horn will try to defend his WBO welterweight title against the challenger and also former undisputed light welterweight Champion of the World undefeated Terrence Crawford. Horn is one dimensional, a raw boxer who comes forward, takes a punch or two to land his punches but no one can argue that he doesn’t have a Champion heart. Jeff reminds me of another tough as nails son of boxing also named Jeff, no it was not Jeff Fenech, but Jeff Harding the former two times WBC light heavyweight Champion.

For Terrence Crawford, he will try to win a major title in his third weight division, perhaps not against the man to beat at 147 but none the less a good test at that weight. I think that Crawford not only has the skills set and the physical tools to succeed at the welter limit but also to become a major force. But the first step is defeating Jeff Horn convincingly, so depending on his performance we could wage Crawford potential at this weight division. I am going to bet for the better boxer, I guess he can build a solid early points lead and in the later rounds apply more pressure to end the fight by TKO or on cuts.

I am ready for this great boxing weekend. But what about the reader, are you ready?

Terence Crawford: I’m putting on a show against Jeff Horn on Saturday »