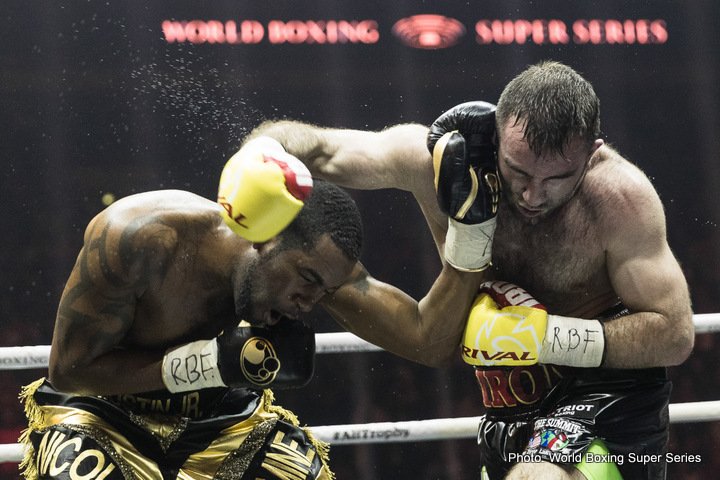 By Allan Fox: IBF/WBA cruiserweight champion Murat Gassiev (26-0, 19 KOs) could be facing unbeaten contender Andrew Tabiti, 16-0 (13) on July 21 instead WBC/WBO champion Oleksandr Usyk, according to Boxingtalk. The negotiations for the World Boxing Super Series finals between Gassiev and Usyk has hit a sticking point, and it’s now looking like Gassiev, 24, will be facing #3 IBF Tabiti instead. It still hasn’t been confirmed by the WBSS organizers whether the Gassiev-Usyk fight will be postponed.

If Gassiev and Usyk fail to face each other, then the WBSS tournament will go up in flames. It won’t be the same if the finals involve a replacement opponent for Usyk. He already beat Mairis Briedis, who arguably is the third best fighter in the cruiserweight division. Gassiev stopped Yunier Dorticos in his semifinals match in the World Boxing Super Series tournament. Dorticos v. Usyk would be an interesting fight for the finals.

The Ukrainian Usyk reportedly doesn’t want the fight to take place in Russia after the Middle East location for the Gassiev fight failed to work after he suffered an injury while training. The fight would make money if it took place in Russia, but if Usyk chooses not to fight there, then they’re going to need to find another location. The Usyk vs. Gassiev fight was originally supposed to take place in Saudi Arabia, which was an odd location to begin with as both guys are from Eastern Europe. Both of Usyk’s first two fights in the WBSS tournament have been on the road against Marco Huck in Germany and Mairis Briedis in Riga, Latvia. Usyk is the No.1 seed in the tournament, but he’s still been forced to be a road warrior the entire time.

If the news about Gassiev face the 28-year-old Tabiti turns out to be valid, it would be a major disappointment to a lot of boxing fans, as they were really looking forward to the Usyk-Gassiev finals of the WBSS tournament. Finding a backup location for the fight was always going to be difficult once the original location of the fight was changed. Having the fight in a neutral venue is a must.

Tabiti, 28, has been a pro since 2013. His amateur career was meager with just 38 fights. Tabiti has looked better recently in defeating 41-year-old former cruiserweight champion Steve ‘USS’ Cunningham, Quantis Graves and Lateef Kayode. However, Tabiti has now shown the kinds of boxing skills that would suggest that he would be competitive with a puncher with the kind of power that Gassiev possesses. This fight has knockout written all over it for Gassiev if he does wind up facing Tabiti. It’s good for Tabiti that he would be getting a title shot, but bad in the respect that he’s not ready for someone like Gassiev or Usyk at this early stage in his development.