A message to Tyson Fury: What was that? 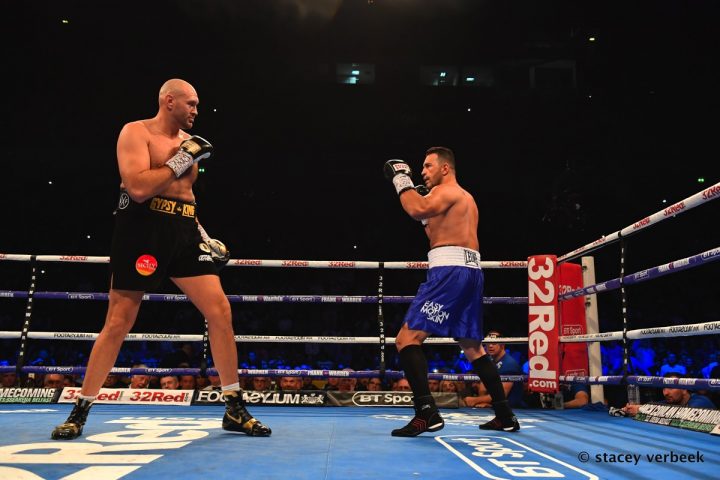 By Edison Carter: Those of us who follow Boxing, rather than the pantomime that often surrounds it, know that you are a rare commodity amongst your fellow Heavyweights. In a division where power seemingly trumps all else, your skill, speed and elusiveness are for many a welcome diversion from the norm.

In wresting the WBO, WBA and IBF belts from Wladamir Klitchko’s grasp two and a bit years ago, in his Dusseldorf backyard no less, you ended the second longest reign in Heavyweight history. It may not have been pretty, it may not have been exciting, but anybody who is unable to appreciate your achievement that night surely does not qualify as a fan of this sport.

What happened next does not need its grave raking over. Suffice to say you lost several of what would have been your prime years. The kinks in your personality that attract people to you are the same that allow you to self-destruct as spectacularly as you did after besting your Ukrainian foe. Your volatility acts as both your biggest strength and biggest weakness, and that’s simply the nature of the beast. You need not change the core character traits that define Tyson Fury.

However, nothing can excuse the nonsense that you served up in your come-back ‘fight’ last weekend. It was an affront, not only to the fans who have stayed loyal to you, but to Boxing as a sport.

Those were words uttered by yourself and directed at David Haye when he returned to the ring in early 2016 after a three year lay-off against unheralded, but ranked, Mark di Mori. Lo and behold, two years later here you are sharing the ring with a career Cruiserweight (Sefer Seferi had fought only once at Heavyweight, a 2016 losing effort to Manuel Charr). A Cruiserweight, Tyson? Seriously? Hardly befitting a former unified Heavyweight Champion, comeback or not.

By all means ease back into the game; nobody expected you to go in with a Heavyweight contender after so long out of the ring. It would have been foolish to do so. But Sefer Seferi posed about as much danger to you as an elderly Ewok.

You appeared to tower over the Albanian by at least 6 inches. You boasted a reach advantage of 10 inches. And you weighed in nearly 5lbs heavier than your foe. The word ‘mis-match’ is not sufficient to explain the gulf in natural attributes and ability between you and your opponent. Frankly, this bout should never have been sanctioned.

The less said about the actual battle the better. A brief summary of the action is all that is

Kiss your opponent at the initial face-off

Do nothing except paw with the jam, stick out your tongue at the crowd and share a joke with the guy you are supposed to be fighting

Clown around some more

It was an event befitting a side-show, not the return of a man who quite conceivably has the skills to ignite the blue riband division. A motivated, confident and fit Fury is a danger to any Heavyweight in the world, including current belt holders Deontay Wilder and Anthony Joshua.

This version of Fury will be going nowhere. He can have learned nothing from fighting Seferi, and the docile nature of the challenge posed by the Albanian would have removed none of the ring rust that has been building for two and a half years.

Were Fury’s team aware of his intentions to clown around to the extent that he did? If Fury’s trainer Ben Davidson was party to his thought process, he should truly hang his head in shame. Fury was exceedingly ill-advised to treat the viewing public the way he did, and if Davidson is unable to keep his charge’s mind where it should be, he should be substituted for somebody more capable at the first opportunity.

Fury can be extraordinarily defensive when it comes to criticism, another symptom of the man’s flawed, and often brilliant, character. But not everybody who is dissatisfied with his shenanigans is a hater. Some of us understand what the man is capable of and are simply exasperated with how naïve and immature this performance was.

We want to see the best Fury, win or lose. The freak-show served up in your comeback is unacceptable, and no amount of bleating about how unfair it is will change that. The fans will lose interest, and its entirely up to you to stop such eventualities occurring.

A fight against Liverpudlian David Price would be a good next move and would go some way to erase the memory of the 9th June 2018. Price and Fury have history (Price beat Fury in the amateurs) and Fury would need to be on his A-Game if he is to avoid the big punching, but vulnerable Brit.

Defeat Price and suddenly you’ll find yourself back in the mix. A title shot against Wilder or Joshua would not be a given, but they would have to take you seriously again.

Put in another performance like last week’s, however, and you’ll never again match the giddy heights you scaled on the 28th November 2015

Boxing » Tyson Fury » A message to Tyson Fury: What was that?