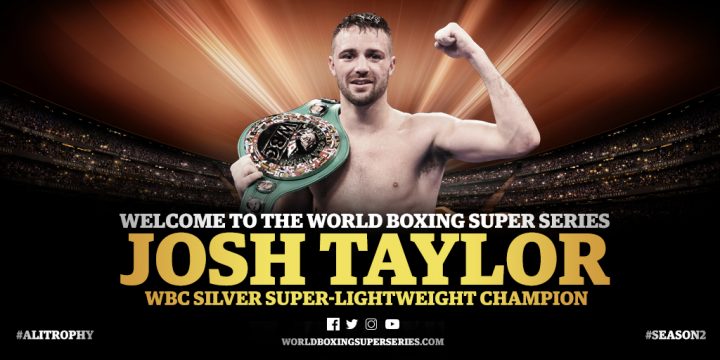 By Scott Gilfoid: In a surprise move, WBC light welterweight mandatory challenger Josh ‘The Tartan Tornado’ Taylor (13-0, 11 KOs) as entered the World Boxing Super Series (WBSS) 140lb tournament to try and capture the Muhammad Ali Trophy. It was assumed that the Scottish fighter Taylor would opt for the easier path in sitting out of the WBSS tournament, which will be inhabited by devastating punchers like Regis Prograis and Kiryl Relikh, in order to face WBC light welterweight champion Jose Carlos Ramirez.

There’s good money for Taylor to make in competing in the WBSS tournament. If he wins the tournament, Taylor will get some good cash as well as winning the IBF, WBA belts and the Muhammad Ali Trophy. Entering tournaments is a good way for fighters like Taylor to increase their popularity back home in a real hurry. Heck, even if Taylor winds up being eliminated from the tournament at some point, he’ll still likely come back to his home turf in Scotland a more popular fighter. Look at what happened to Carl Froch as an example of that. Even though Froch beat Andre Dirrell by a controversial decision and then lost to Andre Ward in the finals of the Super Six tournament in 2011, Froch’s popularity soared in the UK. Froch was able to step into the shoes of Joe Calzaghe, who retired from the sport in 2008 while still in his prime. Froch had wanted to fight Calzaghe, but he was unable to get him to agree to face him. That fight would have made Froch a star in the UK in 2008. Instead, Froch had to wait until 2011 before he became a huge star in the UK, thanks to him competing in the Super Six tournament. Josh Taylor is now on the verge of becoming a star as well in the UK, and it might not matter if he’s beaten by Prograis or Relikh. As long as Taylor gets at least one win under his belt before being eliminated from the WBSS tournament, he should come out of the tourney smelling like roses. Of course, Taylor is going to need to be competitive against Relikh or Prograis in losing to them. I mean, if Taylor gets obliterated by either of them, it won’t help his popularity back him in the UK.

“I am delighted to have had to the opportunity to join the competition,” said Taylor. “It’s a great chance for me to become world champion with multiple organizations. It is also a great honor to fight for the Ali trophy. In honor of the greatest boxer of all times,” Taylor said.

Taylor really didn’t have much choice but to enter the WBSS tournament. If Taylor had fought for the WBC title against Ramirez, there’s a good chance that he would have lost that fight. At least by competing in the WBSS tournament against talents like Prograis, Taylor will have a good excuse if he loses. It won’t hurt Taylor’s career nearly as much losing to Prograis as it would for him to get beaten by Ramirez, who isn’t seen as the best at 140. There won’t be as much blowback from the boxing public for Taylor to lose to Prograis compared to if he gets blitzed by Ramirez.

Now that Taylor has chosen to enter the WBSS tournament, it makes his recent victory last Saturday over Vikor Postol kind of pointless, as he’ now going after the IBF and WBA titles that will be on the line in the tourney. I’m wondering whether the pressure from the boxing public got to be too much for Taylor, as the fans were asking him to enter the WBSS tournament so that he could compete against the best fighters in the division. Had Taylor chosen not to enter the tournament, he would have been perceived by many as ducking the perceived best fighter in the division in Regis Prograis. I mean, Taylor would have still gotten a title shot against WBC champion Jose Ramirez, but a victory over that fighter would have been hallow. The only guy that really counts in the light welterweight division is Prograis, so it wouldn’t matter if Taylor beat Ramirez. I’m not sure that Taylor can beat the 2012 U.S Olympian Ramirez, because

he’s a young talent at 26 with excellent size, power and a VERY high work rate. Ramirez is promoted by Top Rank, which means for a guy like Taylor to mix it up with him, he would likely need to come to his hometown of Fresno, California. Beating Ramirez in the U.S would be very difficult for Taylor, because he would have to deal with the fans. Ramirez fights with a lot of adrenalin when he’s competing in front of a friendly audience.

Taylor, 27, struggled in his last fight to defeat 34-year-old former World Boxing Council light welterweight champion Viktor Postol by a 12 round unanimous decision last week on June 23 in a WBC 140lb title eliminator in Glasgow, Scotland. Postol gave the 2012 Olympian all he could handle before running out of gas in rounds 10, 11 and 12. The judges gave Taylor a wide victory in scoring it 117-110, 118-110 and 119-109. The scores were way off from the fight that had taken place inside the ring though, as Taylor barely won. Boxing News 24 gave it to Taylor by a 7 rounds to 5 score.

The 5’10 southpaw Taylor previously captured a gold medal in the 2014 Commonwealth Games at 140. Taylor didn’t do as well in the 2012 Olympics, getting beaten by Domenico Valentino of Italy. Taylor has been a pro since 2015, and has victories over Postol, Ohara Davies and former lightweight world champion Miguel Vazquez. Other than Postol, who was long in the tooth at 34, Taylor hasn’t fought any of the good fighters at 140 like Prograis, Relikh, Baranchyk, Hooker, Terry Flanagan, Adrien Broner, Omar Figueroa, Alex Saucedo, Mohamed Mimoune, Ryan Martin, Antonio DeMarco, Sergey Lipinets, Amir Imam and Jose Ramirez. Taylor should have fought some of those guys by now, but for some reason his management has chosen not to put him in with those guys.

It would be best for Taylor if he doesn’t get matched up against Prograis until the finals of the World Boxing Super Series tournament. If the fight can be scheduled in the finals, it will help build momentum for the fight with the fans, and it’ll ensure that Taylor isn’t eliminated in his first fight of the tourney, which you can argue is what would happen if he gets Prograis as his opponent.