Carlos Ocampo: I’ll use my height against Errol Spence Jr. 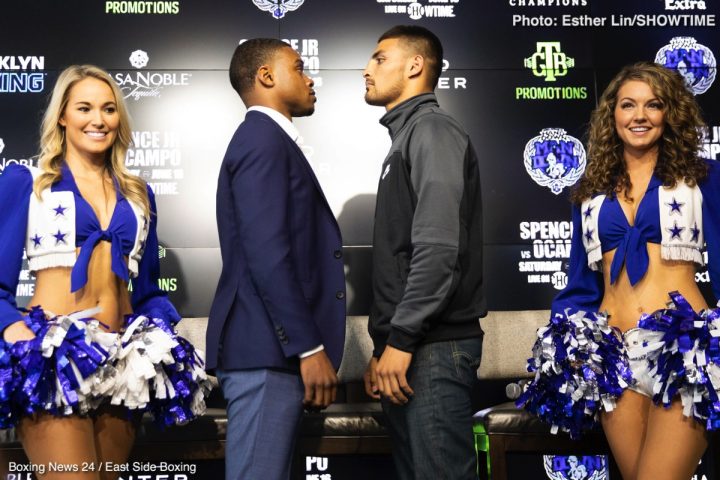 By Jim Dower: Carlos Ocampo says he’s going to use his height to control the action against Errol Spence Jr. on Saturday night in their fight this Saturday night at The Star in Frisco, Texas. Saturday’s Showtime card begins at 9:00 p.m. ET/6:00 p.m. PT on Premier Boxing Champions.

The 5’10 ½” Ocampo (22-0, 13 KOs) has a one inch height advantage over the 5’9 ½” Spence Jr. (23-0, 20 KOs) and he’s counting on that being enough for him to unseat the IBF welterweight champion in their fight on Showtime Championship Boxing on Saturday night.

“I’m going to use my height, distance and jab throughout the fight,” The 22-year-old Ocampo said. ”The counter will be important for me. I’m going to look to catch him so he better be ready.”

Having a height and reach advantage can sometimes work to the benefit of a fighter, but it doesn’t work well when they lack punching power, experience and the talent. Ocampo is a weak puncher, who has been matched carefully by his handlers against journeyman level fighters in Mexico since he turned pro in 2012. Ocampo hasn’t faced the type of competition to adequately prepare him for a fighter in Spence’s talent range. Ocampo is merely a guy that has been given a No.1 ranking by the International Boxing Federation rather than earning it, and now he’s going to attempt to wing it on Saturday night and hope everything goes well for him. Unfortunately, it rarely works out when a fighter has zero experience against good opposition when they step up several levels in the talent department. Ocampo is going to likely be a big example on Saturday night for why you don’t want to suddenly move your fighter up in one bound against a high quality guy without having smaller step up fights. However, it’s not just Ocampo’s management that is to blame for this. It’s also the IBF. They’re the ones that ranked Ocampo No.1 after his wins over no name fighters like Dario Ferman, Daniel Escheverria, Alvaro Robles, Ramses Agaton, Charlie Navarro, Jorge Paez, Johnny Navarrete and Cruz Antonio Flores.

“He can try to come and knock me out, but this is my dream,” Ocampo said. ”This is what I’ve trained my whole life for and I’m not going to let this chance pass me by. I’m going to leave everything in the ring. I’m going to show what I have and give everyone a great performance from start to finish.”

Spence has recent stoppage wins over these fighters:

You can argue that many if not all of those fighters would all beat Carlos Ocampo. Peterson, Brook and Bundu would be nightmarish opponents for Ocampo to try and deal with, as he doesn’t have the boxing experience and more importantly the punching power to keep those guys off of him.

Ocampo is right about Spence coming to knock him out on Saturday night. That is precisely what he plans on doing in this fight. Spence wants to knock him out and keep his KO streak going. Since 2014, Spence has knocked out his last 10 opponents he’s faced. The last guy to go the distance against Spence was Ronald Cruz in 2014. No one since has come close to being able to stay in there for the entire fight. Former IBF welterweight champion Kell Brook came close to going the distance with Spence in their fight last year in May. Brook made it to the 11th round before quitting on one knee when increased the pressure on him. It was a case of Spence just having too much fire power for the ring rusty Brook, who had been out of action for eight months before that after suffering an eye injury in his title challenge against middleweight champion Gennady ‘GGG’ Golovkin in September 2016. Brook made a mistake in moving up to 160 to challenge GGG, and it cost in terms of him suffering an eye injury that sidelined him for eight months afterwards.

“I’ve studied his fights enough. What’s most important is that I know that he has everything to lose and I don’t,” Ocampo said. ”I have nothing to lose. He has all the pressure of being in his hometown.”

Spence is a pressure fighter and not a boxer, so he’s going to be looking to take Ocampo’s head off from start to finish as he always has with his opponents. Spence likes to apply pressure to where his opposition, so this fight is not going to be any different than any other fight for him. If Spence was a boxer and not a knockout artist, then it would be a much different fight than his previous ones because he would need to change his fighting style for him to try and impress his boxing fans. Unfortunately for Ocampo, that won’t be the case. It’ll be business as usual for Spence with him looking to KO Ocampo as he’s done in the past with all of his opponents.

On the undercard, WBA super bantamweight champion Daniel Roman will be facing Moises ‘Chucky’ Flores. Also on the undercard is former super featherweight champion Javier Fortuna facing light welterweight Adrian Granados in a fight scheduled for 10 rounds. Fortuna (33-2-1, 23 KOs) is coming off of a controversial 12 round split decision loss to IBF lightweight champion Robert Easter Jr. last January in Brooklyn, New York. Fortuna, 28, lost his WBA World super featherweight title to Jason Sosa by an 11th round knockout in June 2016. After that loss, Fortuna moved up o lightweight and won four consecutive fights before losing to Easter Jr. earlier this year in a close fight. The southpaw Fortuna, 5’6”, is now moving up in weight once more in going up to 140 to face the always tough Granados (18-6-2, 12 KOs), who is coming off of a tough 12 round unanimous decision loss to Shawn Porter last November. Granados gave Porter all he could handle in a losing effort. Although Porter ultimately got the ‘W’ in that fight, he was stunned on a couple of occasions by Granados, and the fight was a lot harder than many boxing fans expected it to be for ‘Showtime’ Shawn.