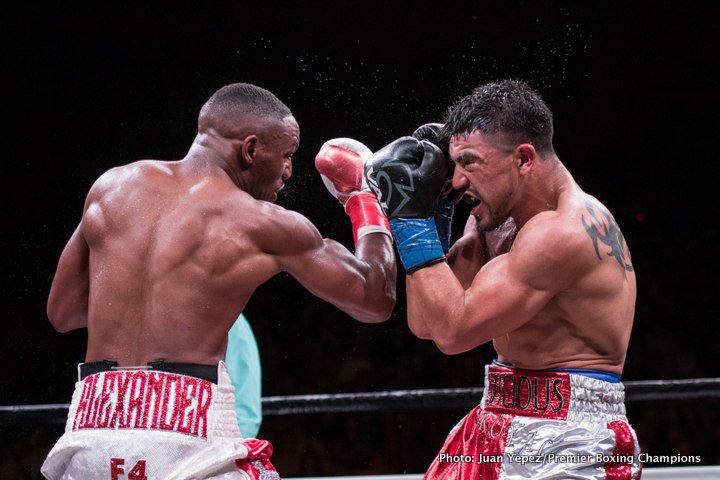 By Jim Dower: Former welterweight world champions Devon Alexander and Andre Berto will be facing each other next month on Showtime Boxing on July 28 on the undercard of the Mikey Garcia vs. Robert Easter Jr. car at the Staples Center in Los Angeles, California.

The winner of the Alexander-Berto fight could find themselves getting a title shot against IBF welterweight champion Errol ‘The Truth’ Spence Jr. in the near future. Alexander is rated #5 by the International Boxing Federation. Spence will be a huge favorite to defeat the winner of the Alexander vs. Berto fight. The loser of the Alexander vs. Berto fight will have very few options with their career. Retirement would have to be viewed as an option for the loser of the contest. It would be bad for Berto in particular because he hasn’t fought in over a year, and he’s coming off of a stoppage loss to Shawn Porter. Alexander looks like the better of the two fighters, but he doesn’t look good enough to beat 147 lb. champions Errol Spence, Keith Thurman or Terence Crawford.

Alexander (27-4-1, 14 KOs) is coming off of a 12 round draw against former WBC welterweight champion Victor ‘Vicious’ Ortiz earlier this year on February 17 in El Paso, Texas. Alexander, 31, looked good initially I the fight, but then gassed out in the second half of the contest and had to hold on to get a 12 round draw. This was Alexander’s second fight of his comeback that he started last year in November. Alexander had been out of the ring for two years since 2015. Alexander arguably deserved the win over Ortiz, but the judges didn’t see it that way.

The 34-year-old Berto (31-5, 24 KOs) hasn’t fought since being stopped in the 9th round by ‘Showtime’ Shawn Porter last year in April. Berto has been out of the ring since then, which has caused the sanctioning bodies to drop him from the top 15. Berto isn’t in great shape in terms of his career right now. He’s lost 2 out of his last 3 fights since 2015.

Alexander vs. Berto is an entertaining match-up between two of the best fighters from a decade ago. Back in 2008, Berto and Alexander were two of the best fighters in the 140 and 147 lb. weight divisions. Things haven’t worked out for them as they’ve gotten older. Alexander’s career was running smoothly until he met up with Shawn Porter in 2013. Alexander lost that fight by a 12 round unanimous decision. Afterwards, Alexander was beaten by Amir Khan and Aaron Martinez. The loss to Martinez was a bad one for Alexander because this is a guy that he should have been able to beat.

Alexander-Berto would have been a great fight if it had taken place eight years ago when the two of them were at their best. Right now, it’s more of an old timers fight between two faded fighters.