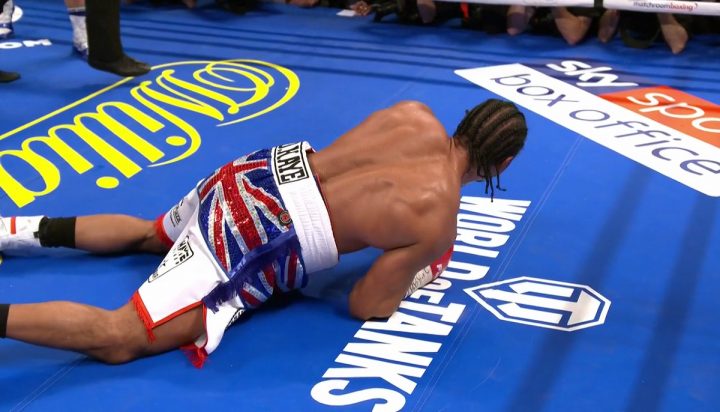 By Scott Gilfoid: In a long overdue move, former two division world champion David Haye announced his retirement on Tuesday following a 5th round knockout loss to Tony Bellew last month on May 5 in London, England. The 37-year-old Haye lost his second consecutive fight to ‘The Bomber’ Bellew. Haye had said he would retire from boing if he lost to Bellew for a second time, because his goal was to fight for a world title against Anthony Joshua. Haye figured that if he can’t beat a fighter in Bellew’s class, then he doesn’t have any chance of defeating Joshua to become a heavyweight world champion for the second time.

Haye had lost to Bellew last year on March 4 after suffering a ruptured Achilles. Coming back from the injury was slow for Haye, as he suffered a biceps tear after slipping while on a stair machine. In the last six years of Haye’s career, he had become increasingly more brittle, suffering cuts, shoulder tears, hand injuries, bicep and calve injuries. With all the chronic injuries Haye has had, it’s a wonder that he lasted this long in his career.

The reason for Haye retiring is an obvious one. He lost twice to what was arguably a former WBC cruiserweight paper champion in Tony Bellew. This wasn’t one of the super talented cruiserweights like Oleksandr Usyk, Yunier Dorticos, Murat Gassiev or Mairis Briedis. This was just a belt holder. Once I became clear that Haye (28-4, 24 KOs) couldn’t even beat a fighter in Bellew’s class, it was abundantly clear that he needed to retire from boxing. What was surprising is Haye waited an entire month before calling it quits, as he should have stepped away from the game immediately after his loss to Bellew when the spotlight was on him. Waiting until June 12 was an odd move on his part.

”Of course, my ego would have loved to have retired on a win, or as a champion,” Haye said on his website. ”The boxing gods have spoken. They will no longer protect me with the freakish speed and power I used to possess. And without these God-given gifts, I completely lose my edge,” Haye said.

Haye’s downfall in the sport if very similar to that of Roy Jones Jr. Both guys dominated with blazing hand speed during the prime of their careers, but once they lost their speed, they become vulnerable against even mediocre fighters. They didn’t have a good foundation to fall back on like fighters like George Foreman when they got older and began to lose their physical skills. Foreman captured an Olympic gold medal in 1968 for the U.S. Haye didn’t possess the same pedigree.

Haye seemed to still have some of his punching power that he once had, but without his hand speed, he wasn’t able to hit Bellew with shots that he didn’t see coming. A prime Haye would have likely destroyed Bellew in the same way that Adonis Stevenson did in 2013. It would have been an early round knockout. But the years of injuries, inactivity and soft living really did a number on Haye’s skills. Getting older also didn’t help Haye.

“But, deep down, I know my effort on May 5, 2018 was the very best I had left to give. I also know that underwhelming effort revealed the truth about my current abilities in a world-class boxing arena,” Haye said.

th round by Car Thompson. Haye was dominating that fight from rounds 1 to 4 until running out of gas in the 5th. The veteran Thompson took advantage of Haye’s lack of stamina by stopping him in the 5th. After that loss, Haye went on a tear, winning his next 15 fights in capturing world titles at cruiserweight and heavyweight before losing to IBF/IBO/WBO heavyweight champion Wladimir Klitschko by a 12 round unanimous decision in a unification fight in July 2011. For all intents and purposes, Haye’s career ended with that fight. As he was only able to win three more fights after that loss in wins over Dereck Chisora, Mark de Mori and Arnold Gjergjai.

The high points for Haye’s career were his wins over Audley Harrison, Nikolay Valuev, John Ruiz, Enzo Maccarinelli and Chisora. If Haye had stayed at cruiserweight, he obviously would have been able to extend his career a little longer. But what hurt Haye’s career most of all was the inactivity. Even in Haye’s prime, he wasn’t fighting nearly enough to take advantage of his talent. If Haye had been a four fight a year type of champion like Gennady Golovkin, he would have had more success, made bigger money and maximized his income.

The low points for Haye’s career were his brawl with Chisora in 2012 at a press conference, and his losses to Klitschko, Thompson and Bellew. Haye lost three and a half years of his career following his win over Chisora in 2012. Haye suffered a shoulder injury that required surgery, and his career was thought to be over at that point. But to Haye’s credit, he was able to come back from the injuries in 2016 in beating two fringe contenders De Mori and Gjergjai. Neither of those fighters was talented enough to give Haye much resistance. Haye likely would have lost if he had fought a good heavyweight contender like Kubrat Pulev or Jarrell Miller.

The sad part about Haye’s back to back losses to Bellew is he made him look better than he actually is. Haye unwittingly helped Bellew’s career, because if ‘The Bomber’ had been forced to fight his #1 WBC contender at the time, Mairis Briedis, he likely would have been knocked out by him and seen his career grind to a stop. Instead, Bellew beat Haye twice, and he’s now using the wins to try and trash talk his way to a fight against former heavyweight unified world champion Tyson Fury in December. Bellew could get a good payday for the Fury fight. That could have been Haye’s fight if he’d beaten Bellew, but his body wouldn’t let him.