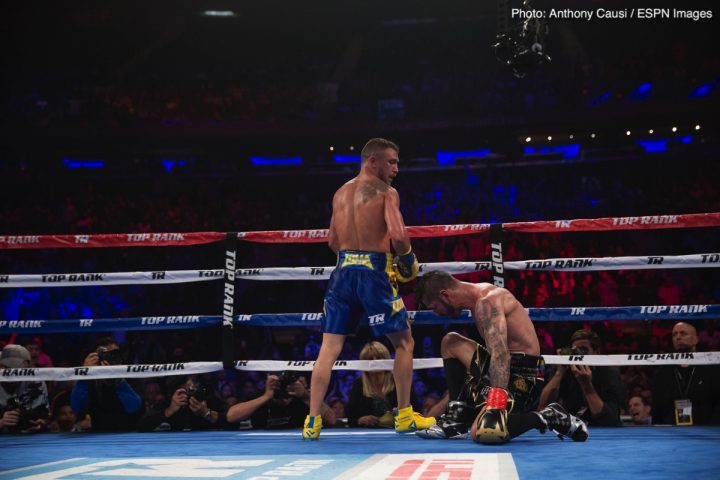 By Jim Dower: WBA lightweight champion Vasyl Lomachenko’s shoulder surgery on his right shoulder is a success. The 30-year-old Lomachenko had surgery performed on Wednesday to repair a torn labrum in his right shoulder, an injury that he suffered in his last fight against Jorge Linares on May 12.

The injury was a full tear of his labrum. Nevertheless, the surgeon Dr. Neal ElAttrache states that the surgery was a success, and he believes Lomachenko will be able to return to the ring in December. That’ll make Top Rank boss Bob Arum happy, as he’s already penciled Lomachenko in for December 8 on ESPN, and he wants him to face WBO lightweight champion Ray Berltran on that date.

The arthroscopic surgery on Lomachenko was performed in Angeles, California.

“The tissue was very nice and we were able to achieve a very nice sturdy repair that should provide him with stability in his shoulder, and I am optimistic for an excellent prognosis,” Dr. Neal ElAttrache said ESPN.com.

Lomachenko’s right shoulder came out of the socket in the 2nd round against Linares in their ESPN televised fight at Madison Square Garden in New York. The shoulder popped back into the socket, and Lomachenko was able to fight effectively the remainder of the way en route to stopping Linares in the 10th round on May 12. After the fight, Lomachenko’s right shoulder was in pain. He went back home to Ukraine, and though of having surgery over there, according to Dan Rafael.

When Arum learned of the injury, he recommended that Lomachenko come to Los Angeles to have it checked out over there. After an MRI exam was done on Lomachenko’s injured right shoulder, it was determined that he would need surgery. The surgery was scheduled for Wednesday and performed by Dr. Neal ElAttrache without any problems.

Lomachenko will be flying back to Ukraine in 8 to 10 days. Dr. Neal ElAttrache will be in contact with him by Skype from the U.S.

Despite Dr. by Dr. Neal ElAttrache’s positive prognosis for a full recovery, it won’t be known for months whether Lomachenko’s shoulder will be the same. But as we saw in his fight against Linares, Lomachenko did a good job with fighting with an injured shoulder. If for some reason his right shoulder is never the same, he still likely will do well, as he has good power in his left hand. Lomachenko isn’t power puncher. He tends to throw rapid fire combinations with moderate power. If he loses some power in his right hand, it won’t be a big deal.

Before learning of Lomachenko’s shoulder injury, Arum wanted him to fight on August 25 against Ray Beltran (35-7-1, 21 KOs) in a unification fight. Not one to give up, the persistent Arum will still make the Lomachenko-Beltran fight. He’ll wait until December 8, as long as Lomachenko is 100 percent healthy and capable of fighting.

Unfortunately, there’s no demand from the boxing public in Lomachenko vs. Beltran. This is one of Arum’s in house fights. Perhaps it won’t matter to the casual fans that Lomachenko is fighting a non-star in Beltran. It’s not going to get the hardcore boxing fans excited, because Beltran has already been beaten many times in the past.

The fans want to see Lomachenko battle WBC lightweight champion Mikey Garcia. That is the fight that fans are interested in and clamoring for. Beltran is a backwards move for Lomachenko, who finally fought someone interesting in Linares earlier this month after years of facing non-stars. Some boxing fans think Arum is afraid to let Lomachenko fight Mikey because of what would happen if he’s knocked out. For sure, it would be a major blow to Lomachenko’s career. Depending on how badly Mikey beats Lomachenko, he might not ever be able to regain the boxing fans he loses from that fight.