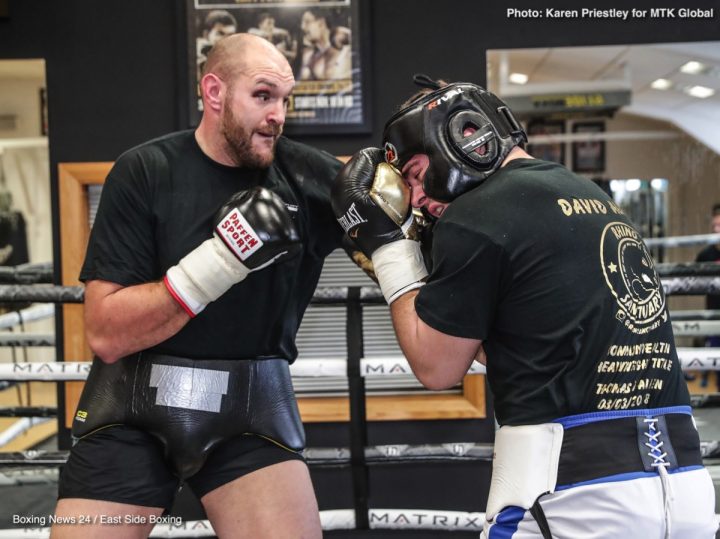 By Scott Gilfoid: Not content with fighting cruiserweight Sefer Seferi on June 9, former unified heavyweight world champion Tyson ‘Gypsy King’ Fury is offering Tony ‘Bomber’ Bellew (30-2-1, 20 KOs) a fight. Fury (25-0, 18 KOs) is trying to make a comeback after being out of the ring for 2 ½ years. He’s scheduled to fight 39-year-old cruiserweight Sefer Seferi on June 9 at the Manchester Arena in Manchester, England.

It was believed that after Fury beats Seferi, he would begin fighting legitimate heavyweights, as his ultimate goal is to challenge IBF/WBA heavyweight champion Anthony Joshua. Nevertheless, Fury is now offering hope to the 34-year-old Bellew by letting him know that he can have a fight against him if he fancies it. Bellew has made it clear that he wants a big payday fight before retiring.

Bellew just beat a shot 37-year-old former WBA heavyweight champion David Haye by a 5th round knockout in their rematch on May 5. Instead of moving back down to cruiserweight to face the likes of Mairis Briedis, Yunier Dorticos, Murat Gassiev or Oleksandr Usyk, Bellew is now trying to entice Fury to fight him. It would be a total farce, of course, as Bellew is too little to compete with Fury or quality heavyweight that isn’t injured over-the-hill like Haye. Bellew is a flabby looking cruiserweight fighting at heavyweight, and it appears that Fury is going to give him a payday fight rather than putting him on ignore and taking on more serious fighters.

“I saw Bellew’s interview on BT,” Fury said on his Instagram. “Tony, you’re a bell-end. Trust me, you can get it if you want it, mate. Manchester’s finest vs. Liverpool’s worst. I’ll punch your face in for you,” Fury said.

Bellew has been giving Fury heat about fighting a cruiserweight in his comeback fight. Fury said he didn’t want to hurt Bellew, but then he turns around and selects the cruiserweight Seferi to fight. Bellew figures that means that Fury is afraid to fight him. The way I see it is that if Fury wants to fight nothing but cruiserweights that he drags up to heavyweight, then he needs to face the quality guys, not a 34-year-old Bellew, who is just looking for a payday to feather his retirement years. If Fury wants to comb through the cruiserweight ranks to pick out opponents, then he should fight Yunier Dorticos, Mairis Briedis, Oleksandr Usyk or Murat Gassiev.

You have to ask whether Fury had some problems sparring with heavyweights in getting ready for his comeback. Maybe Fury likes fighting cruiserweights? He fought former cruiserweight champion Steve Cunningham in 2013 and stopped him in the 7th round. However, the 210 lb. Cunningham knocked the 254 lb. Fury down in the 2nd round despite being outweighed by 44 lbs. That was an incredible amount of weight that separated the two combatants. Why Fury wanted to fight a former cruiserweight is hard to know. It just looked like to me that Fury didn’t want to fight a true heavyweight, so he chose Cunningham to pad his record with.

If Fury is going to fight Bellew instead of actual heavyweights, they should make it an exhibition fight rather than a true match, because it’s basically a ‘business fight’ and not one that will determine anything. If Bellew wins, which I seriously doubt, then he goes nowhere in the division. He’s not going to fight WBC champion Deontay Wilder or Joshua. Bellew has already said he has no interest in fighting Dillian Whyte. Someone like Alexander Povetkin would likely hurt Bellew badly in the same way he did with David Price. If Bellew goes back down to cruiserweight to fight the top guys in the division, he’ll surely lose. Guys like Usyk, Gassiev, Dorticos and Briedis would be way too good for Bellew, which is likely why he never fought them in the first place when he was fighting in the weight class.

Since it seems like Fury’s main focus in his comeback is to make as much coin as possible, he might as well fight Bellew, because I don’t think he has any chance of winning a world title at this point. There isn’t an over-the-hill, gun-shy Wladimir Klitschko for Fury to beat to win a world title against. The days of Fury beating up a timid Wladimir are over with. If Fury fights for a world title now, he’s not going to fight someone that will be afraid to throw punches. Heck, even if Fury faces WBA ‘regular’ heavyweight champion Manuel Charr, he’ll have to deal with incoming fire from the German based fighter.