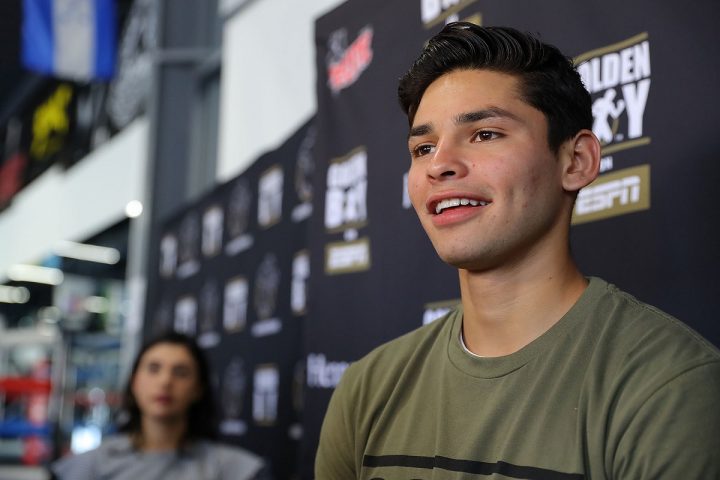 Garcia, 19, says he wants to fight for a world title after the fight with Velez against WBA Super World super featherweight champion Gervonta ‘Tank’ Davis (20-0, 19 KOs). Since Garcia doesn’t call his own shots in making his fights, he’s going to have to wait until his promoters at Golden Boy Promotions feel he’s ready for the likes of the 23-year-old Davis.

There’s not much age that separates the two young super featherweights, but in terms of power and experience. There’s a huge difference. Davis is so much more powerful, heavier and a lot more experienced at the pro level than the rail thin Garcia. For Garcia’s sake, he needs to hope that Golden Boy doesn’t throw him in with Davis in the next four or five years, because he doesn’t have the size or the power to compete against Davis right now. Davis needs to fill out and grow up a lot for him to have a chance against Davis. 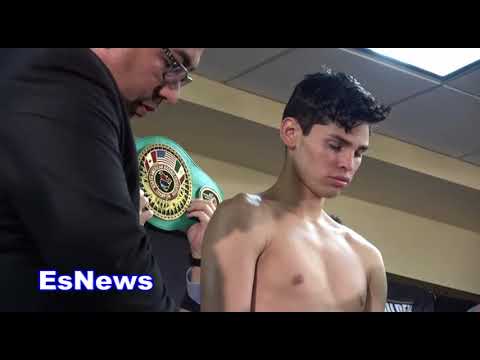 If Garcia insists on fighting Davis, Golden Boy would likely reluctantly buckle and give him his wish, but it won’t likely end well for Garcia. WBC lightweight champion Mikey Garcia thinks it’s a really bad idea for Ryan Garcia to fight Davis, and he doesn’t think Golden Boy will let that fight happen. Mikey likes the way that Ryan Garcia has built a following on social media, but he doesn’t see him as being ready for Davis.

“The next step after this fight will be to be a world champion. I am ready for Gervonta Davis,” Garcia said to Fight News. “Yes I have to pay my dues but I am ready. I have been boxing since I was seven years old and have faced different styles. There are steps to take but I am ready. I believe in myself, I can do it.”

It’s good for Garcia’s popularity for him to be calling out Gervonta Davis, because his name dropping, which is basically what he’s doing, is getting more fans interested in him. There are a lot of casual boxing fans that aren’t too familiar with Ryan Garcia, because he hasn’t been around for too long and he’s never fought a contender at super featherweight.

Even after fighting the 30-year-old Velez on Saturday, Garcia STILL won’t have fought a contender. Velez is no longer a world class ranked 126 lb. fighter following his 4 consecutive losses between 2015 and 2016 to Ronny Rios, Joseph Diaz, Rene Alvarado Alfredo Santiago. The Puerto Rican fighter Velez has won his last 3 fights in beating Alberto Mercado, Giovanni Caro and Juan Manuel Lopez. Velez’s recent 12th round knockout win over the 34-year-old former 2 division world champion Lopez last March was a good one. It doesn’t mean that Velez is ready to challenge for a world title at 126, because Lopez is not the same fighter he was earlier in his career when he held world titles from 2008 to 2011. Lopez was never the same fighter after losing to Orlando Salido by an 8th round knockout in 2011.

Ryan Garcia is coming off of a 1st round knockout win over journeyman Fernando Vargas (32-13-3) on March 22 in Indio, California. You can argue that Vargas is the best opponent that Garcia has fought up to this date. Golden Boy hasn’t been taking any chances with Garcia as of yet. The fighters that Golden Boy has matched Garcia against are fighters that pretty much any contender in the featherweight division would beat. Garcia has looked good against the opposition that has been put in front of him but he’s not fought the kind of opponents that would give one a chance to see whether he has the kind of talent to beat a fighter like Gervonta Davis or WBC super featherweight champion Miguel Berchelt. Right now, those guys like way too good for Garcia.

Velez’s own career was humming along from 2007 to 2014. Things turned sour for Velez when he met up with IBF World featherweight champion Evgeny Gradovich in November 2014 and fought to a controversial 12 round draw. Gradovich appeared to win the fight, but the judges scored it a draw. Velez took a lot of punishment in the fight and his career has not been the same since. After beating Daniel Ramirez (11-4, 5 KOs) by a 10 round unanimous decision in June 2015, Velez lost his next four fights to Ronny Rios, Joseph Diaz, Rene Alvarado and Alfredo Santiago. Those were all good fighters, but the fact that Velez lost all four of the fights wasn’t a good sign. Diaz beat Velez by a lopsided 10 round unanimous decision in March 2016.

“I’m just ready. I will do something more amazing this time. I will show my boxing skills,” Garcia said about the Velez fight.

The hype about Garcia has come way too early for him, especially when you factor in that he didn’t go to the Olympics. Garcia did have a good amateur career in posting a 215-15 record, but he didn’t go to the Olympics and he didn’t stick around at the amateur level long enough for boxing fans to learn whether he’s got the kind of talent to make it at the highest levels in the pros. Garcia turned pro in 2016 at age 17-years-old, and he hasn’t been matched against anyone dangerous enough to get a good read on his potential. Golden Boy likely has a good idea whether Garcia will ever cut it at the pro level. They had to have put him in with some seasoned pros in sparring to see whether he could hang or not. Just going by how Garcia has looked in his recent fights, he doesn’t look like he’s in the same class as WBC champion Berchelt, WBA champion Gervonta Davis, former WBO champion Vasyl Lomachenko or WBA ‘regular champion Alberto Machado. Those fighters look so much more powerful than Garcia right now. What they don’t have is the strong social media skills than Garcia possesses. Outside of the ring, Garcia is at his best on Twitter and Instagram. Garcia is a champion on social media, but unfortunately there isn’t a world title for that.

On the undercard of Garcia vs. Velez, middleweight contender Gary ‘Spike’ O’Sullivan (27-2, 19 KOs) will be fighting welterweight Berlin Abreu (14-1, 11 KOs) in a 10 round fight. O’Sullivan turned down a bigger payday to fight IBF/IBO/WBA/WBC middleweight champion Gennady Golovkin in order to fight little known welterweight Abreu. However, there’s a chance O’Sullivan could get a fight against Saul Canelo Alvarez in the near future.