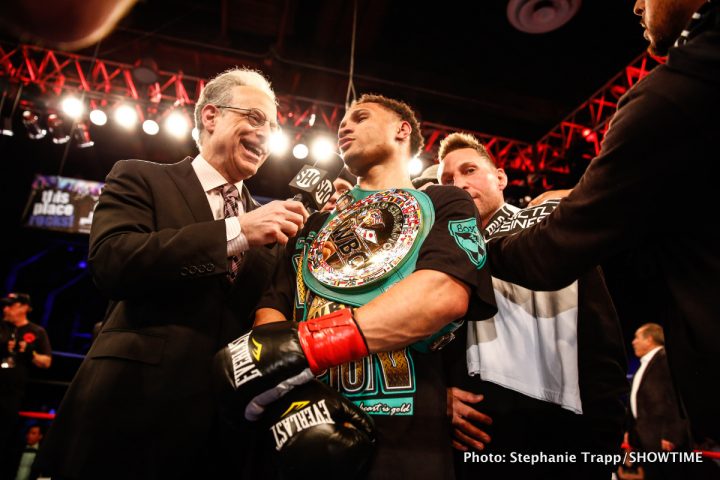 By Chris Williams: The World Boxing Super Series (WBSS) 8-man tournament will be well represented at 140 with the following being some of the names in the tourney: Regis Prograis, Kiryl Relikh, Eduard Troyanovsky, Ivan Baranchyk and Anthony Yigit.

These five are the names that have been revealed thus far. The other three remaining names are expected to be announced on Wednesday.

Here are two of the quarterfinals matches in the WBSS 140 lb. tournament:

• Ivan Baranchyk (18-0, 11 KOs) fighting Anthony Yigit (21-0-1, 7 KOs) for the vacant IBF 140lb title that was recently vacated by champion Mikey Garcia after the IBF ordered him to defend against Baranchyk. Mikey preferred to go back down to lightweight to continue defending his WBC 135 lb. title rather than facing the 25-year-old hard-hitting Baranchyk.

There’s no word yet who WBC interim light welterweight champion Regis Prograis (21-0,18 KOs) will be facing. It would be nice to see Prograis fight someone like Alex Saucedo, Adrien Broner or Rances Barthelemy. It’s doubtful that Broner and Saucedo will be taking part in the WBSS tournament.
One fighter that WON’T be competing in the WBSS tournament is WBC light welterweight champion Jose Ramirez. His promoters at Top Rank haven’t entered him into the tournament.

The rumors are that Top Rank didn’t want to lose control of the match-making that they’re doing for Ramirez. Top Rank also didn’t enter their fighter WBO super middleweight champion Gilberto ‘Zurdo’ Ramirez into the WBSS 168 lb. tournament last year. If they had, Ramirez would potentially be on the verge of fighting in the finals against George Groves or Callum Smith. It would have increased Ramirez’s popularity if he wasn’t eliminated in the quarterfinals or semifinals against one of the talented fighters. Not having WBC 140 lb. champion Jose Ramirez in the WBSS light welterweight tourney for a potential 3 fights. Top Rank seems to be betting that the 25-year-old Ramirez will be turned into a star with the combination of their deal with ESPN and their careful match-making. You can argue that it helps Top Rank if Jose Ramirez doesn’t fight in the WBSS tournament, because there’s good chance that he would end up having to tangle with Regis Prograis, who is looking like the best fighter in the 140 lb. division right now. Prograis has entered the WBSS tournament, and he has a very good chance of winning it, and then swinging back to face Jose Ramirez by 2019 to pick up his WBC belt if he doesn’t vacate his title to avoid the fight. Prograis and Ramirez had a purse bid canceled for their fight, and it hasn’t been rescheduled. There’s talk that Top Rank didn’t want to make the Ramirez vs. Prograis fight. That they wanted Prograis to fight on the undercard of Ramirez’s first title defense of his WBC 140 lb. title in southern California so that they could build the fight up. Prograis is Ramirez’s WBC mandatory challenger, so it would be pointless for him to have to jump through an unnecessary hoop to get a fight that he’s mandated to get. Prograis choosing to compete in the WBSS 140lb tourney lets Ramirez off the hook for now. It’s unlikely that Top Rank is going to be able to turn Ramirez into a superstar in 1 year that it’ll take for Prograis to win the WBSS tournament. If Ramirez doesn’t vacate his WBC title by 2019, he could be up against it when he eventually has to face Prograis in what could be a fight that ends badly for the Top Rank fighter.

Josh Taylor will be fighting Viktor Postol on June 23. The winner of that fight would be a great addition for the WBSS 140 lb. tournament. Also, the winner of the Mikey Garcia vs. Robert Easter Jr. fight on July 28 would be a great addition as well to the WBSS light welterweight tourney, as long as they’re willing to move up in weight. It would give Mikey a good excuse for not having to fight the winner of this Saturdays fight between WBA World lightweight champion Jorge Linares and Vasyl Lomachenko. Mikey will have intense pressure put on him to fight the winner of that fight. I don’t think Mikey can beat Lomachenko. However, I don’t see Mikey doing well against Prograis if he were to take part in the WBSS 140lb tournament. Progais is just too big and too strong for Mikey.

The WBSS bantamweight tournament will have these 3 champions among the 8-man list:

It’s surprising that Matchroom Boxing promoter Eddie Hearn is allowing his fighter WBA bantamweight champion Ryan Burnett compete in the tournament, because he recently vacated his IBF 118 lb. title to avoid having to fight Emmanuel Rodriguez. If Burnett is going to win the WBSS tournament, there’s a chance that could come up against Rodriguez. Last Saturday, Rodriguez defeated Paul Butler by a 12 round unanimous decision to win the vacant IBF bantamweight title that Burnett had vacated. Tete’s promoter Frank Warren is letting him compete in the WBSS tournament. That’s an understandable move on his part, as Tete has a good chance of winning the tournament iof he can get past the 25-year-old Rodriguez, who might be the best fighter of the bunch thus far.

It would be great if former 2 division world champion Naoya Inoue were to sign up for the WBSS. He was considered the best fighter at super flyweight before moving up to bantamweight. If Inoue were to win the tournament at 118, he would prove himself to be the best fighter in the division. The criticism about Inoue is he moved out of the super flyweight division without facing the best fighters Srisaket Sor Rungvisai, Juan Francisco Estrada, Roman ‘Chocolatito’ Gonzalez, Khalid Yafai and Jerwin Ancajas. Inoue was considered the best by the boxing fans, but he never proved it. If Inoue follows the same pattern at 118, then he might not enter the WBSS tournament. The bantamweight tournament needs Luis Nery. He’s a very good fighter when he’s able to make weight.