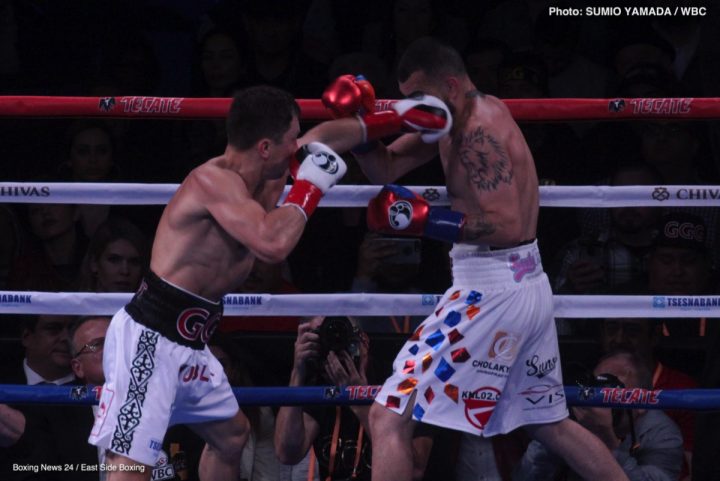 By Sean Jones: Gennady Golovkin vs. Vanes Martirosyan brought in a lot of viewers on HBO last Saturday night in averaging 1.25 million viewers with a peak of 1.36 million in their fight at the StubHub Center in Carson, California.

Golovkin’s win over Martirosyan, who moved up from the 154lb division to face him, ties him with Bernard Hopkins at 20 title defenses for a middleweight. Golovkin plans on breaking the record against Saul Canelo Alvarez if the fight can get made next for September. However, Golovkin only gives it a 10 percent of the fight happening because he has doubts whether Canelo will enroll in drug testing before the start of training camp. Triple wants Canelo to be randomly drug tested during the months leading up to the rematch. If Canelo chooses not to be drug tested, then Golovkin may be forced to go in another direction for his next fight.

Fighting for the first time in eight months since his controversial 12 round draw against Saul Canelo Alvarez, Golovkin (38-0-1, 34 KOs) knocked Martirosyan down in the 2nd round after landing a left-right hand combination. Martirosyan unable to get up off the canvas and was counted out by referee Jack Reiss at 1:53 of round 2. The fight brought in a lot of boxing fans at the StubHub Center, but it wasn’t a sellout. There wasn’t enough time to market the fight properly.

The high ratings for the Golovkin-Martirosyan fight gives GGG’s team the last laugh by showing the critics that they were right to stick with the May 5th date after Saul Canelo Alvarez dropped out of the fight three weeks before the date. A lot of fans felt Golovkin should have canceled the May 5th date and waited until June so that he could fight a good opponent like WBO middleweight champion Billy Joe Saunders or Sergey Derevyanchenko rather than Martirosyan (36-4-1, 21 KOs), but he stuck with the original date and it paid off with high ratings.

This shows that Golovkin is a very popular fighter for him to bring in those kinds of ratings against the replacement opponent Martirosyan. This was a stay busy fight for GGG, who absolutely needed to get back into the ring to get the ring rust off after he was stuck waiting on Canelo. The Mexican fighter felt he needed 8 months to rest after his hard fight against Golovkin last September at the T-Mobile Arena in Las Vegas, Nevada. Some boxing fans feel that Canelo’s decision to make the 36-year-old Golovkin wait 8 months for the rematch was a move to age him more. The longer that Canelo makes Golovkin wait for the rematch, the better his chances are that he’ll be able to beat him.

Golovkin would have made $20 million had he fought the 27-year-old Canelo las Saturday night. Instead of getting $20M, Golovkin made $1 million to defend against Martirosyan. Golovkin had put in a lot of hard work in training for the Canelo fight, and he didn’t want to just throw the time away for nothing. It was obviously a hard camp for GGG. It was crucial for Gennady to get back into the ring, get the rust off, and let his boxing fans see him, because he’s been stuck waiting on Canelo for 8 months.

Golovkin wanted to fight the Mexican star in a rematch last December, but Canelo wasn’t interested. He wanted to rest for a full 8 months before fighting again. Rather than having nothing to show for the 8 months and be forced to wait an entire year before he fought again, Golovkin took the fight with Martirosyan. Golovkin has a lot of Mexican fans, so he wanted to give them a gift by making it a drama show by fighting on Cinco de Mayo against Martirosyan. Golovkin’s promoter Tom Loeffler tried to get unbeaten 21-year-old junior middleweight contender Jaime Munguia as the opponent for the May 5th date, but he was rejected by the California Commission due to his inexperience against top level opposition. Martirosyan was given the fight because he was well-known in Southern California, and he had plenty of experience against good fighters like Jermell Charlo, Demetrius Andrade and Erislandy Lara.

Martirosyan didn’t last long through against GGG in getting knocked out in the 2nd round. The fight wasn’t entirely one-sided, however. Martirosyan got the better of Golovkin in the 1st round after hitting him with some solid shots late in the round. This seemed to anger Golovkin, who came out in the 2nd round looking like he wanted to end it right away. Every punch that Golovkin threw in round 2 had knockout intentions. Martirosyan was hurt right away after getting caught with a left hook. Martirosyan retreated to the ropes for a last stand, and was knocked out immediately after getting hit with 5 heavy shots from Golovkin that landed flush.

NEWS:   Gennadiy Golovkin vacates his IBF title: Will he fight Erislandy Lara next?

Moments after the Martirosyan fight ended, Golovkin made it clear that he wants a rematch against Canelo Alvarez in September. As long as Canelo is drug tested well ahead of time, Golovkin wants to fight him again. Canelo isn’t being tested as of yet following his 6-month suspension by the Nevada State Athletic Commission, but his promoter Oscar De La Hoya says he’s going to be getting tested frequently.

Golovkin insists that Canelo be randomly drug tested to make sure he’s clean before he faces him a second time. There’s no word on what’s causing the delay for Canelo to begin drug testing.

Tom Loeffler of K2 Promotions is now going to set about trying to put together a rematch with Alvarez for the Mexican Independence Day holiday on September 15. It’s a fight that Golden Boy Promotions wants, and supposedly Canelo too. The negotiations will have start all over again, but it’s likely that it won’t be as difficult this time as it was for the first fight last September.

Loeffler was able to put together a deal for Golovkin to fight Canelo on May 5. Unfortunately, that fight was wiped out due to Canelo’s two positive tests for clenbuterol. As I mentioned earlier, the sticking point for the negotiations could be the random drug testing for Canelo that Golovkin wants.

If Canelo resists the drug testing, for whatever reason, then Golovkin will have to make up his mind about whether he wants to face an untested Canelo. The Mexican fighter will still be tested, but it might not happen until training camp stars in July. That would mean that Canelo would have 3 months of no testing. If the testing by VADA doesn’t start until August, then Canelo would have 4 months of no testing. Will Golovkin agree to still face Canelo even if he’s not been randomly tested? We’ll have to see. With the money that Golovkin can make fighting Canelo, he might be agreeable to it. Golovkin thought that Canelo was using PEDs for his first fight with Canelo, and he still appeared to beat him. So, he might not care if he’s not tested for the second fight. Golovkin had the much better engine of the too. Canelo was running out of gas 45 seconds into each round. Canelo was completely gassed after 45 seconds of every round, even the 12th. The judges were seemingly scoring the rounds based on the activity in the first minute and ignoring Golovkin’s domination in the last 2 ¼ minutes of the rounds.