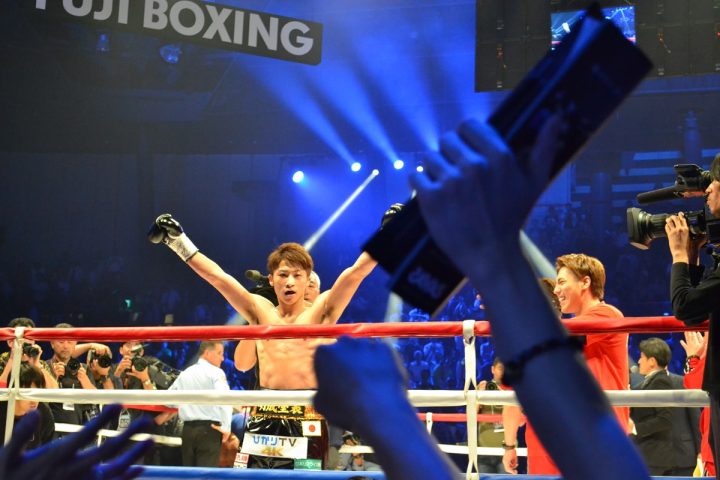 By Rishad Marquardt: Tonight, Naoya Inoue of Japan defeated Jamie McDonnell of the United Kingdom at Ota-City General Gymnasium in Tokyo by way of TKO in round one of the fight to claim the WBA regular bantamweight championship belt. Inoue was attempting to become the fastest Japanese fighter to win world championships at three weight divisions in just his 16th professional fight.

It took him less than two minutes to achieve this and yet again showed unbelievable power which translated from his move up to bantamweight. McDonnell was hoping to defy the odds and extend an unbeaten record that has gone on for a decade but Naoya was in a class of his own. McDonnell’s problems began after he received a left hook to the head which rocked him back. Inoue, who had been told by his father to hold back in the first round, smelt blood and seconds later landed a brutal left to the body that felled his opponent. Jamie got up only to receive ａ flurry of power shots which again sent him to the canvas and simultaneously forced the referee to end the fight.

Inoue was the favorite going into the fight with the bookmakers having him 1.16 odds on to win the fight, a stark contrast to the 6.0 odds that were being given for McDonnell to emerge victorious. The odds though were not something that was bothering the visiting team. In the build up to the fight, I asked Jamie’s trainer Dave Coldwell about how he felt about yet again going into a major bout as the underdog following the first fight between David Haye and Tony Bellew, as well as their recent rematch. He responded by stressing that in those fights, not to mention some of Jamie’s previous fights, not only have they gone in as underdogs, but they have gone in expecting to get ‘absolutely smashed’. Unfortunately for their team, that was exactly what happened on this occasion.

The mood from the Inoue camp towards their opponent’s camp had soured after the weigh-in. McDonnell had arrived over an hour late, a move that Inoue had interpreted as being highly disrespectful. After the weigh-in, Eddie Heard told the Japanese media that it was common for people to be late in the UK. Inoue didn’t buy that one bit. When he was asked what he made of it, he said what can be roughly translated as ‘he is taking the piss’, before adding that he didn’t like the attitude of Jamie’s team when they arrived at the weigh-in venue. It is very untypical for a fighter’s team to be vocal during an official proceeding such as a weigh-in, a stark contrast to what we see in the UK and US where both sides tend to cheer or on occasion, hurl abuse at the other opponent. I can vouch for the McDonnell team that although they were indeed vocal, none of the volume was directed in a negative way towards Naoya, they were there in support for their man. Any animosity that brewed here can only really be put down to a difference between cultures.

Naoya looked as if he wanted to punish Jamie and he did in devastating fashion. McDonnell looked drained before the weigh-in and before the fight, he had reportedly put on 12 kilos (26 pounds) in just one night. He looked out of sorts but when I asked Naoya if he saw the same thing, he said he didn’t notice anything. When asked about team McDonnell’s tactics at increasing weight so dramatically, Naoya’s response was ‘that kind of tactic can only have a negative effect on your body’. This victory has surely moved him up the pound for pound rankings and has sent shockwaves throughout the division. This year, the only fighter who can compare in terms of excellence in Vasyl Lomachenko. Between them, they have won titles across six different weight classes in just 28 fights. Straight after the fight, Inoue announced in the ring that he would join the bantamweight version of the World Boxing Super Series that will commence later this year. WBA Super bantamweight world champion Ryan Burnett, WBO holder Zolani Tete, and recently crowned IBF holder Emmanuel Rodriguez will all appear in the tournament too. When asked who he wants to face, he didn’t specify anyone in particular saying he would happily fight any and all of them. I for one, cannot wait to see this young ‘monster’ in the ring again.