Loeffler: GGG says Martirosyan fought more in 2 rounds than Canelo did in 12 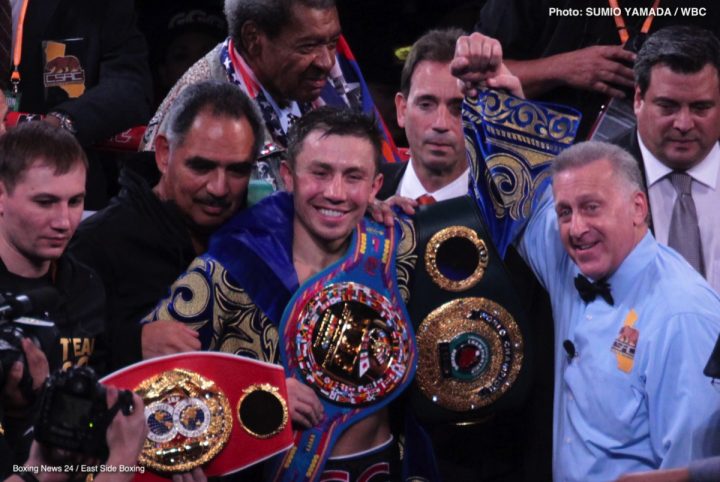 By Dan Ambrose: Tom Loeffler says middleweight champion Gennady Golovkin told him that Vanes Martirosyan put up more of a fight last Saturday night than Saul Canelo Alvarez did in the entire 12 rounds that he fought him last September.

Golovkin was impressed with the way Martirosyan came to fight and wanted to brawl with him. In contrast, GGG didn’t like the way Canelo ran from him for 12 rounds and fought to survive last year. Golovkin had to settle for a 12 round draw against Canelo because he was running the entire fight, and turning his back on him when he would throw body shots.

“Nothing is signed, so we’ll see what happens,” said Tom Loeffler to Villianfy about the Canelo vs. GGG rematch. “He’s back on a knockout streak. He had 23 knockouts in a row. He said Vanes fought more in 2 rounds than Canelo did in 12 rounds. We broke the record in the StubHub for attendance and for revenue,” Loeffler said.

That’s admirable that Golovkin was able to break the attendance and revenue record for the StubHub Center in Carson, California. When you break a record fighting a replacement opponent like Martirosyan, it shows you how popular GGG. That’s impressive. Golovkin started a new knockout streak by stopping Martirosyan in the second round for his first knockout since his stoppage win over Kell Brook in September 2016. Golovkin had been unable to KO his last two opponents Canelo and Daniel Jacobs, both of which were on their bikes for most of the fights.

You must give Canelo a break for not wanting to stand and fight Golovkin. Canelo has never had a good engine, and he’s always gotten by with him being the bigger guy in his fights. Before facing Golovkin, Canelo would fight in spurts and take long breathers to recover from the brief expenditure of energy. Canelo could do this when he was fighting at 147, 154 and 155, because he was the bigger and stronger guy. But against Golovkin, Canelo didn’t have the arm length, the frame or the stamina to fight the way he normally did.

Canelo looked to be the heavier guy, but his superior bulk was bodybuilding muscle, and he was useless to him because his cardiovascular system couldn’t carry that extra muscle that he’s packed on in a hurry during training camp. That’s the problem with fighters that bulk up in a brief period like Canelo did. When you add a bunch of muscle weight in 4 to 8 weeks, you forget that your heart must pump blood to all that extra muscle you’ve put on. What happens if you can’t get a fast knockout, you end up gassing out and fighting on a small portion of each round. That’s what we saw with Canelo. He fought just the first 45 seconds of each round, and then he was done for the rest of the round. He spent the rest of the time moving and throwing pot shots. Golovkin totally outworked Canelo. The judge still gave Canelo the rounds, but they didn’t do an excellent job scoring the fight.

Sor Rungvisai to give El Gallo Estrada a rematch »