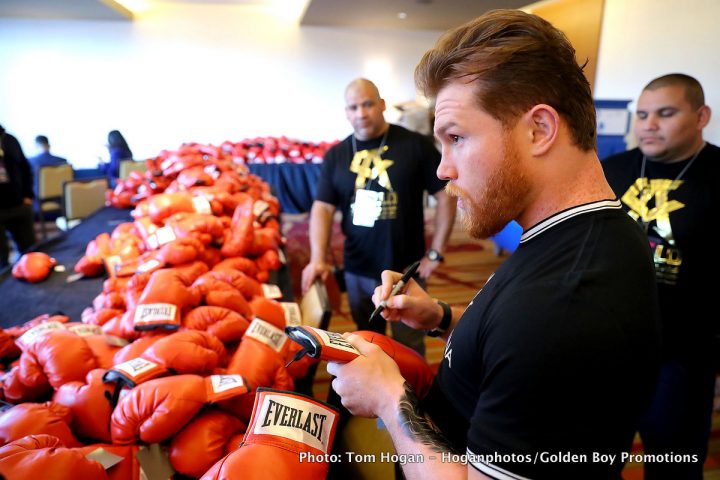 By Jim Dower: Saul Canelo Alvarez has passed a drug test conducted by the Nevada State Athletic Commission conducted 10 days ago in Mexico, according to Dan Rafael. This is obviously good news for Canelo’s fans, as he failed two drug tests last February after testing positive for the banned substance clenbuterol. Canelo is now enrolled in in VADA testing, which is a 24/7 random testing program.

Canelo’s negative test for drugs is obviously too late to save the rematch with Golovkin in May, as the Mexican star has already been given a six-month suspension by the Nevada State Athletic Commission for his two failed tests.

It’s important that Canelo continue to test negative for drugs, because he needs to rebuild his tainted reputation with the boxing fans after his two failed tests for clenbuterol last February. For a lot of fans, when they hear that a fighter has been popped for drugs, they label them as a cheater and they write them off. It’s imperative that Canelo prove to the fans that he’s not a cheat and that he really did test positive because he ate contaminated beef last February. The belief by a lot of boxing fans is Canelo was worried about Gennady Golovkin, so he used clenbuterol to give him an edge for the May 5 rematch.

In other news on the Canelo front, his promoter Eric Gomez of Golden Boy has expanded the list of potential opponents for his September 15 fight by adding former IBF middleweight champion David Lemieux to the list. It had to have been an oversight on Oscar De La Hoya’s part not to have mentioned the 29-year-old Lemieux’s name to the list because he’s one of Golden Boy’s fighters.

This is the current list of potential opponents for Canelo’s next fight: Billy Joe Saunders, Daniel Jacobs, Gary ‘Spike’ O’Sullivan and Jermall Charlo.

Golovkin is on the outs with Golden Boy right now after asking for 50 percent of the purse for the Canelo rematch. Golovkin wants half of the revenue for the rematch with Canelo because he’s the champion and he’ll possibly need to give up his IBF title to take the fight in September. Golden Boy doesn’t seem to care about Golovkin being a multi-belt middleweight champion. They base the 65/35 revenue split in favor of Canelo for the GGG rematch on the Mexican fighter’s greater popularity. Canelo brings in more fans than GGG. Therefore, he deserves the bigger percentage split of the revenue. In the first fight, Canelo enjoyed a 70-30 split, and the fight ended in a controversial 12 round draw that many felt Golovkin should have won.