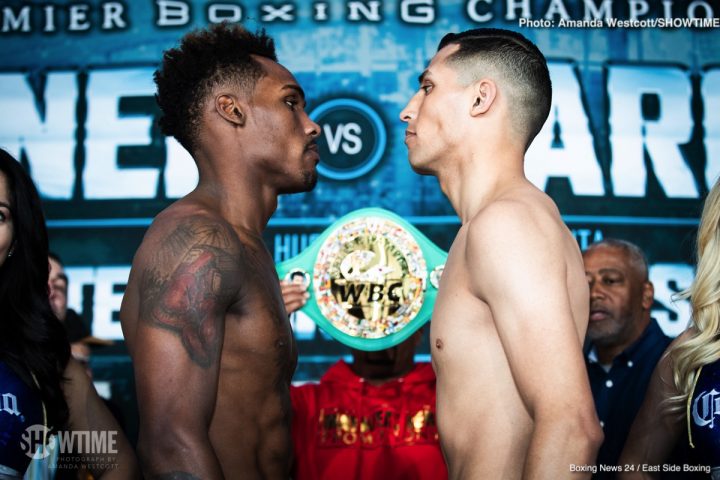 By Jeff Aranow: Jermall Charlo (26-0, 20 KOs) weighed in 160 pounds on Friday for his fight against Hugo Centeno Jr. (26-1, 14 KOs) for interim WBC middleweight strap on the undercard of the Adrien Broner vs. Jessie Vargas card on Showtime Boxing at the Barclays Center in Brooklyn, New York. Charlo-Centeno should be a fun fight for as long as it lasts on Saturday night. Some boxing fans believe Charlo is the future of the middleweight division. If so, he should be able to take care of Centeno Jr. without any problems.

The 6’1 ½” Centeno is viewed as a pushover for Charlo, but there could be a lot of surprised boxing fans on Saturday. The lanky Centeno Jr. has a 2 inch reach advantage over Charlo, and he likes to throw wide shots in the same way that WBC heavyweight champion Deontay ‘Bronze Bomber’ Wilder does. 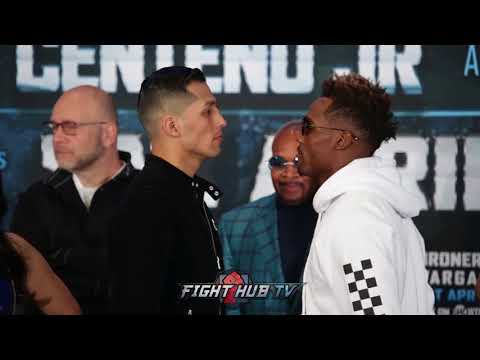 Centeno hits hard enough as it is, but when he connects with his looping shots, his power is even more devastating, because his opponents don’t see the punches coming due to the wide angle that he throws from. If Charlo can’t get Centeno Jr. out of there early, he could have a real fight on his hands. Centeno’s only loss was a 10th round knockout to the Polish fighter Maciej Sulecki in June 2016.

Sulecki was able to nullify Centeno’s height and reach by jabbing, moving in quickly to close range to land his left hooks and short right hands. Sulecki was holding a lot as well, and throwing punches on the inside. Centeno had no answer for Sulecki’s inside game and his movement. Centeno doesn’t move well, so he constantly had to deal with the Sulecki’s mobility and changing angles. Centeno Jr. has won his last two fights against Immanuwel Aleem and Ronald Montes. Centeno Jr. stopped Aleem in the 3rd round with a wide left hook to the head that knocked him out badly. Aleem is a hard puncher, but he just wasn’t able to track the left hooks that Centeno Jr. kept hitting him with in that fight. Centeno’s left hooks had Aleem looking clueless.

The winner of bout will be in the driver’s seat to get a shot at WBC middleweight champion Gennady Golovkin. Charlo, 27, and Centeno Jr. are trying to get fights against GGG and Saul Canelo Alvarez. The winner of the Charlo vs. Centeno Jr. fight will keep themselves in the title picture for Golovkin and Canelo. Eventually one of those two fighters will need to face him if they intend on staying at 160. In Golovkin’s case, it’s hard to know what his future holds. He could stay at 160 if he unifies the middleweight division or he could move up to 168 to go after the winner of the World Boxing Super Series tournament. Time will tell which direction Golovkin goes in. Charlo could be the guy that becomes the new Golovkin if he can stay active and keep winning.

Charlo-Centeno Jr. could easily be the main event on Saturday, as it promises to be a more thrilling tifhg than the Broner vs. Vargas contest. That’s not a knock on Broner-Vargas, but those guys aren’t the top fighters in their respective divisions. At best, Vargas is no better than No.8 in the welterweight division. For his part, Broner is no better than the 10th best fighter in the 140 lb. weight class in my estimation. Broner has really dropped off the map in terms of being one of the best fighters in the light welterweight division.

“Jermall Charlo might be the hardest puncher in that division. He’s got a tough matchup because Hugo Centeno Jr. is also a terrific young fighter with power and great boxing ability. He has star potential if he can overcome this obstacle against Charlo,” promoter Lou Dibella.

Dibella might be getting a little carried away by saying Charlo is potentially the hardest puncher in the 160 lb. weight class. We know that Charlo had one-punch power when he was fighting at 154. His knockdowns of Julian ‘J-Rock’ Williams and Cornelius Bundrage proved that he’s a major puncher at junior middleweight. However, Charlo couldn’t knock Austin Trout down, who had been dropped by Saul Canelo Alvarez and Erislandy Lara in the past. Charlo never came close to putting Trout on the floor. We don’t know whether Charlo’s punching power has carried up to the 160 lb. weight division.

The only fight that Charlo has had at middleweight was against the injured Jorge Sebatian Heiland last year in July, and the Argentiian fighter was fighting on one leg the entire fight. Heiland came into the fight with an injury and he wasn’t capable of giving Charlo a competitive fight. What was noticeable in that fight was how easily Heiland was able to hit Charlo when he did throw shots, and how the punches seemed to bother the Texas native. What would have happened had Heiland been completely healthy for the fight. It might have been a different story. Charlo hasn’t fought since then and neither has Heiland. Charlo has been out of action for 8 months. That’s a long time for a top level fighter to be inactive. Charlo fought only once in 2017, and who knows whether he’ll get a second fight in this year. It would be a shame if Charlo becomes another Keith Thurman in terms of fighting once a year.

“No one has handed me anything,” Centeno Jr. ”This is one of the hardest divisions in the world, and I’m here for a reason. This fight means the world to me. It’s been 20 years of hard work coming together Saturday.”

Centeno Jr. is going to need to raise his game to beat Charlo, because this could be the most talented fighter he’ll have h

Charlo held the IBF 154 title from 2015 to 2017 after stopping champion Cornelius Bundrage in the 3rd round. Bundrage was 41-years-old at the time, and clearly not the same fighter he’d been in the past. Charlo then defended his IBF title successfully three times in beating Wilky Campfort, Austin Trout and Julian Williams. By the time Charlo defeated Trout, he was having problems making the 154 lb. weight class, and he needed to move up to 160. However, even in making weight for his fight with Heiland at middleweight last July, Charlo looked weight drained. There’s a possibility that Charlo may soon outgrow the middleweight division as well.

“I’m not Immanuwel Aleem, and I’ll let you all see that when [Saturday] gets here,” Charlo said. “It’s a whole different ballgame when you get in there trying to trade with me. You better have power, so I hope he’s ready for it.”

Like his brother Jermell, Jermall is a pot shot fighter, who throws mostly single power shots in which he loads up on them with as much power as possible. Centeno Jr. won’t have to worry as much about getting hit with a lot of shots on Saturday by Charlo. It’s going to be a sharp shooter type of style for Charlo, which means that the pace of the fight will likely be slow the way Centeno Jr. likes it. Centeno Jr. is a much better fighter when he’s facing a fighter that throws single shots than when he’s facing a pressure fighter that is throwing lots of shots. Centeno Jr. was worn down by Maciej Sulecki’s aggressive, fast paced style in 2016. Centeno was not suited at all to that style of fighting. 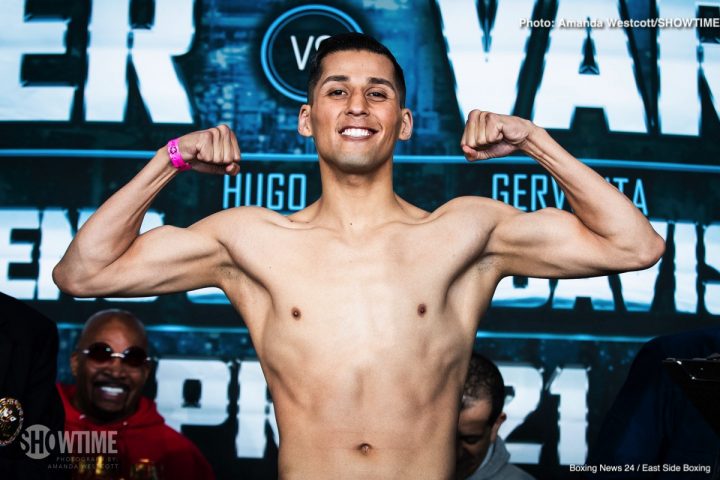 Dibella: Canelo ate tainted beef when he knows he’s not supposed to »