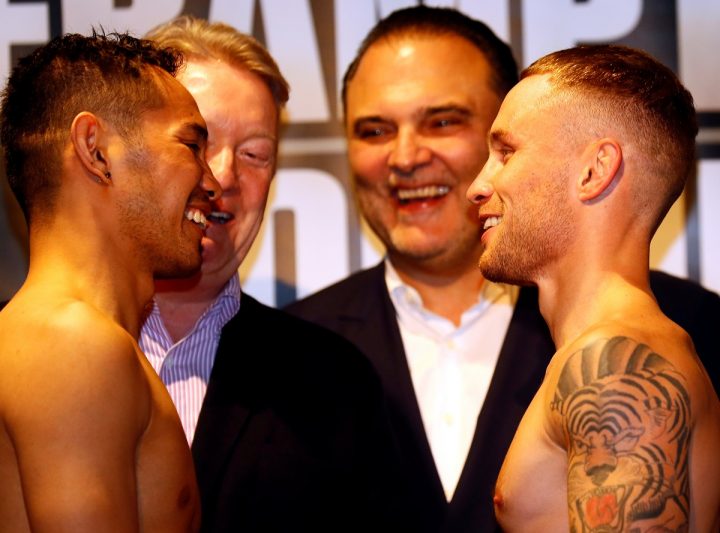 By Jim Dower: Former world champions Carl Frampton (24-1, 14 KOs) and Nonito Donaire (38-4, 24 KOs) both made weight on Friday at their weigh-in for the interim WBO World featherweight title for this Saturday’s clash at The SSE Arena in Belfast, Northern Ireland.

Frampton, 31, weighed in at 125.2 pounds. Donaire came in at 125 ½ lbs. The winner of the Frampton-Donaire fight will be awaiting WBO World featherweight champion Oscar Valdez when he heals up from his broken jaw he suffered in his last bout against former Frampton opponent Scott Quigg.

Frampton is talking about this being the last chance for him if he loses to the 35-year-old Donaire, although that would seem highly unlikely to happen due to the other opportunities out there for him for nice paydays. If Frampton loses to Donaire, it will likely be from a sudden knockout, which is often how the California native has often won his fights in the past.

It wouldn’t be over with for Frampton. He would still have his huge following in the UK, and he could easily come back from a loss to Donaire by facing the winner of the Lee Selby vs. Josh Warrington fight. Frampton could also fight the winner of the Leo Santa Cruz vs. Abner Mares rematch. There are a few fights that would still be out there for Frampton if he loses to Donaire on Saturday.

“He’s dangerous because I think we’re in a similar position maybe – last chance saloon – where a loss could be the end. I’m not thinking about that,” Frampton said.

Both fighters didn’t look at their best in their recent fights. Frampton struggled to defeat the younger, bigger, faster and stronger 27-year-old Horacio Garcia (33-4-1, 24 KOs) in a controversial 10 round unanimous decision win last year on November 18 at The SSE Arena in Belfast. Frampton was put on the floor in round 7 by Garcia, and he was dominated in the last three rounds. 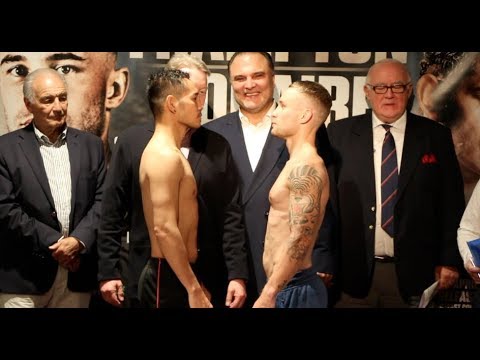 The scoring was very favorable to Frampton with the judges scoring it 98-93, 97-93 and 96-93. The fight could have gone the other way. A draw would have been the best result for the fight, as neither guy established themselves as the better fighter. The fact that Frampton was given another controversial win isn’t the important thing. What’s important is how faded Frampton looked.

Frampton clearly showed signs of ring wear and fatigue. Even in the early rounds when Frampton was at his best, he didn’t look like the same guy had dominated his opposition from 2009 to 2015. Frampton seems to have lost a sizable portion of his game as a result of his punishing fights against Kiko Martinez, Alejandro Gonzalez Jr., Scott Quigg, Leo Santa Cruz [x 2] and Horacio Garcia.

“Look at what he’s done in the ring and what’s he achieved. What I’ve done has been overshadowed by what he’s done. He’s a quality fighter and achieved a hell of a lot,” Frampton told iFL TV.

The winner of the Frampton vs. Donaire fight is going to have a ton of problems trying to beat WBO featherweight champion Oscar Valdez. He’s fighting at an elevated level right now and looking impossible to beat. Unless Scott Quigg took something out of Valdez in their recent war, you would have to favor Valdez over the winner of the Donaire vs. Frampton fight.

Donaire has done a lot with his career, but he’s had several setbacks that has taken the gleam off of what he’d achieved earlier in his career. Donaire’s losses to Guillermo Rigondeaux, Nicholas Walters and Jessie Magdaleno were ones that hurt him. Donaire had no real need to move up to featherweight following his loss to Rigondeaux in 2013. If Donaire had stayed at 122, he could have captured another title and likely remained a world champion until Magdaleno emerge on the scene in 2016. That was clearly a fighter that Donaire had no answer for.

If Donaire had stayed at 122, he’d have had a good chance of winning the IBF super bantamweight title against Ryosuke Iwasa, WBA belt against Daniel Roman or the WBC title in facing Rey Vargas. Those are three very winnable fights for Donaire. The money might not be huge for Donaire, but he would at least have a good chance of winning a world title.

If Frampton loses to Donaire, which is a real possibility given the way he’s looked recently, then he should go after the winner of the fight between IBF featherweight champion Lee Selby and Josh Warrington. Those guys can’t punch at all, and the only thing Frampton would have to worry about against them is being outworked or out-slicked. Selby is a crafty fighter, who uses his height advantage to get the better of short, less talented opposition. Selby has not faced anyone talented in their prime during his career, and he’s there to be beaten when he faces his first good opponent.

WBO World bantamweight champion Zolani Tete (26-3,21 KOs) weighed in at 116 ½ pounds for his title defense against 42-year-old former two division world champion Omar Andres Narvaez (48-2-2, 25 KOs) for their co-feature bout. #1 WBO Narvaez weighed in at 117 ¼ lbs. Narvaez has won his last five fights since losing to Naoya Inoue by a 3rd round knockout four years ago on December 30, 2014. Narvaez has padded his record a little though with wins over these fighters:

• Jesus Vargas (14-4-1) x 2. For some reason, Narvaez fought Vargas twice despite easily beating him by a 7th round stoppage in their first fight in February 2016

Tete, 30, wants to fight the other top guys at bantamweight, but he’s had no luck yet in getting any of them to agree to fight him. Tete wants to face WBA bantamweight champion Ryan Burnett and Naoya Inoue. Unfortunately, neither of those guys has shown interest in fighting him. It could be that Tete will need to keep winning long enough to eventually get a shot at Burnett and Inoue. Hopefully, it doesn’t turn out to be a case whether those guys wait Tete out until he’s old and venerable before they eventually face him. Burnett and Inoue are both a lot younger than Tete, so they can in theory wait him out until he’s old before they eventually face him.