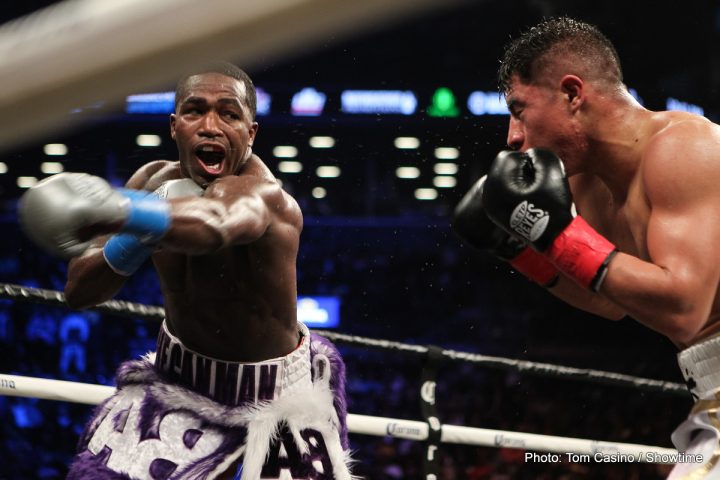 The back-and-forth battle was a tale of activity vs. accuracy. Vargas was by far the more active fighter, throwing 839 total punches, 300 more than his opponent. Yet the flashy Broner was supremely accurate, connecting on 44 percent of his power shots and 38 percent of his total punches, compared to just 27 and 24, respectively, for Vargas.

Broner (33-3-1, 24 KOs) came on strong in the second half of the fight, picking up rounds eight through 10 on all three of the judges’ scorecards. The 12th round was crucial in determining the draw, which was scored 115-113 Broner and 114-114 twice. The judges agreed on eight of the 12 rounds but couldn’t agree on the final round, which was ruled differently by the two judges who scored the fight a draw.

“I want to thank Jessie Vargas. He’s a two-time world champion for a reason,” said Broner, who was working for the first time with Kevin Cunningham as his head trainer. “He came to fight but at the end of the day, you all know I beat him. Point blank, period.

“I was connecting with rights. I got warmed up in the early portion of the fight. My trainer was a big help tonight. I want to thank Coach Cunningham as well as my original coach, Mike Stafford, for realizing I needed to do something different.

“I would love to fight Vargas again, but let’s go back to my town to do it.”

Vargas (28-2-1, 10 KOs) worked off the jab and was incredibly effective with his body shots in just his second fight with trainer and former world champion Mike “The Body Snatcher” McCallum.

“It must have been a close fight for the judges to have scored it the way they did. I felt that I won the fight and I was up two rounds. I’m relying on the judges to make the right decision.”

Charlo is now the mandatory for Gennady “GGG” Golovkin and didn’t shy away from calling out the WBC, WBA and IBF Middleweight World Champion.

“It’s been an amazing journey to get here,” said Charlo, the twin brother of WBC 154-pound champion Jermell Charlo. “I’m a two-time world champion. Bring on ‘GGG.’ I want that fight. I’m 27-0 with 21 knockouts. Everybody sees it. What more can I say?”

Charlo (27-0, 21 KOs) proved that his power translates to middleweight as he knocked out his second opponent since relinquishing his title and moving to 160 pounds. The Houston native has now won via knockout in five of his six bouts since initially becoming champion in 2015. A series of shots opened up a huge left hook in the opening minute of the second round, flooring Centeno (26-2, 14 KOs), who failed to beat the 10-count and was counted out at :55.

“Everybody has always avoided me and from now on, this is how it’s going to be,” said Charlo. “You see what you get.”

Following the fight, Centeno was aware of the mistakes that led to the loss.

“I thought I started off pretty well. I wanted to go out on my shield but it wasn’t my day,” Centeno said. “He caught me and got the knockout. I was trying to work my jab. I thought I got him with a couple good shots but I lingered too long in the pocket and I didn’t get out in time.”

In the opening bout of the telecast, Gervonta Davis became a two-time world champion in empathic fashion with a third round TKO of former champion Jesus Cuellar to capture the vacant WBA 130-pound World Championship. VIDEO: https://s.sho.com/2vusWsW

The undefeated Davis (20-0, 19 KOs), who lost the IBF 130-pound title on the scales last August, scored three knockdowns in less than three rounds to win his second title in the super featherweight division. The 23-year-old connected on 49 percent of his power shots in his first bout with new trainer Kevin Cunningham.

“On the undercard of the Mayweather-McGregor fight, I just wasn’t focused,” Davis said. “It was the second time fighting on Mayweather’s card so it got to my head and it showed. After the fight, I went home and talked to my team and we decided it was time to leave Baltimore. I’m focused and it showed because I’m a champ again.

“There’s always bumps in the road when you want to become successful. It’s all about how you bounce back and tonight I showed that I’m a true champion.”

Davis utilized a combination of body shots, uppercuts and effective counterpunching to break down Cuellar, a former titlist at 126-pounds. Baltimore’s Davis floored Cuellar with a body blow in the second round and didn’t relent from there. The southpaw pressed forward in the third, stalking Cuellar against the ropes and sending him down for the second time with a series of combinations. Cuellar (28-3, 21 KOs) got up, but was in serious trouble and referee Benjy Esteves stepped in to halt the contest at 2:45 with the Argentine falling to the canvas for the third time.

“The game plan was to box a little bit and open him up with some shots,” Davis said. “When it was time, I went forward and caught him with enough shots to get him out.

“I want the IBF belt back and I’m ready to unify it with whoever wins the [Tevin] Farmer vs. [Billy] Dib fight.”

On Saturday’s telecast, it was announced that Errol Spence Jr. will make the second defense of his IBF Welterweight World Championship against undefeated mandatory challenger Carlos Ocampo June 16 on SHOWTIME in a homecoming fight in Dallas.