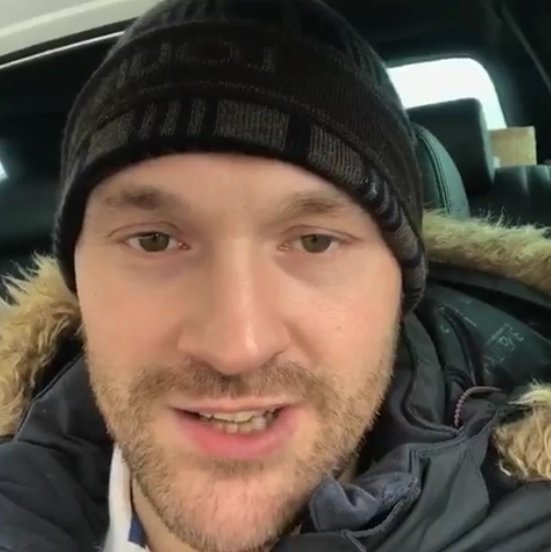 By Marcus Richardson: Tyson Fury is saying that he’s about to announce a new “massive deal.” The 29-year-old former heavyweight champion Fury (25-0, 18 KOs) isn’t saying what the deal is about. There’s a great deal of speculation about this. Some fans think Fury is about to sign with Eddie Hearn’s Matchroom Sport company.

Fury recently got approval to continue his boxing career with the BBBofC, but doesn’t have a fight scheduled. Fans thought Fury would be back inside the ring by April, but it’s unknown if that’s going to be happening given how slow it’s been for his comeback. Fury wants to get his weight down to around 260 lbs. for his first fight of his comeback. He’s dropped a considerable amount of weight. Only 2 months ago, Fury looked massive and in no condition to be fighting.

Morning guys, just a quick update. Just finished in the gym… feeling fantastic,” Fury said on his Instagram. ”Really starting to get the weight down now and really starting to get back in shape. Been pouring a bit of Cristal in the protein shake… hold tight 50 Cent. Really going good. Any time now, about to announce a massive, massive deal so y’all better wait for this,” Fury said.

Fury last saw action in November 2015 against Wladimir Klitschko in Dusseldorf, Germany. In the aftermath of that fight, Fury dealt with mental health and drug issues that kept him from continuing his career and taking advantage of the success he had against Klitschko. Now after 2 ½ years of inactivity, Fury is close to resuming his boxing career. He wants to reclaim his IBF/IBO/WBA/WBO heavyweight titles by beating Anthony Joshua. If Fury can accomplish that goal, he’ll be targeting WBC champion Deontay Wilder to fully unify the heavyweight division.

When Fury does resume his stalled boxing career, it’s thought that he’ll get in 2 to 3 fights in 2018 to get the rust out and get him ready for 2019, which is when he’s expected to take on the tougher fights against the likes of Joshua and possibly Wilder.


« Deontay Wilder: How many times do I call Joshua out?

Adrien Broner vs. Jessie Vargas on April 21 on Showtime »