Adrien Broner vs. Jessie Vargas on April 21 on Showtime 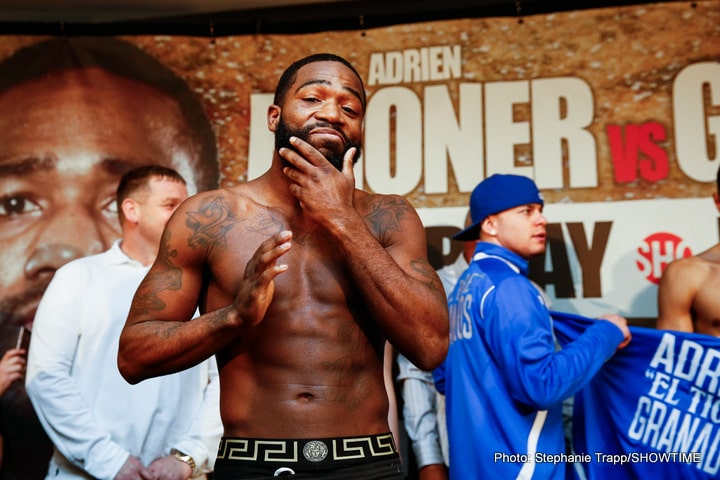 By Dan Ambrose: Injured Omar Figueroa Jr. will be replaced by former WBO welterweight champion Jessie Vargas (28-2, 10 KOs) as the opponent for Adrien ‘The Problem’ Broner (33-3, 24 KOs) for his next fight on April 21 on Showtime Boxing at the Barclays Center in Brooklyn, New York.

The 28-year-old Figueroa Jr. suffered a shoulder injury recently while training for the Showtime-televised fight against Bruner, and he was forced to pull out of the April 21st fight.

The Broner vs. Vargas fight is still being finalized, according to Dan Rafael of ESPN.

Vargas is arguably a step up from Omar Figueroa Jr. in terms of talent. That doesn’t mean that it would be a tougher fight for Broner. Figuera’s high volume punching style likely would have been a real problem, as he doesn’t tend to throw a lot of shots. Vargas isn’t a high volume like Figueroa. Vargas loads up on his punches more, and he tries to hurt his opponents with his shots a lot more. Vargas’ 33% knockout percentage suggests that he’s not much of a puncher. In the last two years, Vargas says he’s improved his punching power by using better form on his shots, but his record doesn’t bear that out.

Vargas’ last knockout came 2 years ago against Sadam Ali in a 9th round stoppage. Vargas failed to knockout his last 2 opponents in journeyman Aaron Herrera and Manny Pacquiao. Vargas lost to Pacquiao by a lopsided 12 round unanimous decision in November 2016. At the time of the Pacquiao fight, Vargas held the WBO welterweight title after picking up the vacant title in his previous fight against Sadam Ali in March of 2016. Vargas took a year off from boxing after the defeat to Pacquiao. Vargas came back last December and defeated Aaron Herrera by a 10 round unanimous decision.

It’s still unknown what weight the Broner-Vargas fight will take place at. Broner maintains that he’s a 140 lb. fighter, and that’s the weight that Figueroa Jr. was going to be fighting him at. Vargas, 28, previously held the WBA World light welterweight title at 140 from April 2014 to June 2015. Vargas has fought most of his 10-year pro career at 140. However, Vargas hasn’t fought in that weight class since November 2014, when he defeated Antonio DeMarco by a 12 round unanimous decision. Vargas moved up in weight to the 147 lb. division in June 2015 in losing to Timothy Bradley by a 12 round unanimous decision. Vargas has been fighting at welterweight ever since, and he’s currently won 2 out of his last 3 fights.

Broner is coming off a 12 round unanimous decision loss to Mikey Garcia last July. That defeat puts Broner at a crossroads with his career. This could be a negative turning point for Broner’s once promising career if he loses to Jessie Vargas. The loss to Mikey Garcia was a bad one for Broner, as he wasn’t competitive during the contest.

If Broner gets beaten by Vargas, it would be his third loss in his last six fights. It would be an obvious sign that Broner is not going to be a top-level fighter anymore. Since moving up from the super featherweight and lightweight divisions, Broner has been a reliable fighter, but not an outstanding one. Broner has performed more like a capable journeyman level fighter than the world class guy he’d been when he was fighting at 130 and 135. It’s possible that Broner was never that good to begin with. He won his 4 division world titles against weaker opposition in Vincente Martin Rodriguez, Antonio DeMarco, Paulie Malignaggi and Khabib Allakhverdiev. It’s been case of Broner being in the right place at the right time to capture world titles against vulnerable fighters. Those fights didn’t take place that long ago, and yet none of those fighters are relevant guys any longer. It shows clearly that Broner is largely a product of careful match-making more so than him ever being a great talent. Broner lost each he stepped up against better opposition against Marcos Maidana, Shawn Porter and Mikey Garcia. Broner also has two controversial decision wins against Adrian Granados in February 2017 and Daniel Ponce De Leon in March 2011. A lot of boxing fans thought Broner deserved loses Ponce De Leon and Granados. If Broner had lost those fights, as many people believe he should have, he’d have 5 defeats on his record and he would look more like a journeyman level fighter today than a guy fighting in a main event on Showtime.

Vargas looked decent but not great in his comeback fight last December against journeyman Aaron Herrera. Vargas’ power was good, but his hand speed appeared slow and not what it was a couple of years ago. The good news for Vargas is Broner doesn’t have much hand speed either. He’s a flat-footed fighter that stands in front of his opponents looking to punch with them. If Vargas can throw enough shots, he’ll have a good chance of winning the contest. This is Broner’s card though on Showtime. He’s the A-side guy, and it’ll likely be mostly Broner’s boxing fans that will be attending the fight on April 21 at the Barclays Center in Brooklyn, New York.

Vargas is from Los Angeles, California, and that’s a long way away for his fans to have to travel to see him face Broner. With the crowd likely to be overwhelmingly Broner fans, it could be tough for Vargas to win a decision in this fight unless he really dominates the contest. Vargas is no stranger to controversial decisions as well. He has a very questionable 12 round unanimous decision win over Antonio Novikov in August 2014 that went his way. The boxing fans that saw that fight had Novikov winning. Vargas also has a controversial 12 round unanimous decision win over Khabib Allakhverdiev in April 2014. That’s another fight that Vargas appeared to lose but the judges gave him the decision. Just ignoring the outcomes of the Novikov and Allakhverdiev fights, you have to agree that Vargas looked very bad in both fights. Vargas fought poorly against Bradley and Pacquiao. As such, there are a lot of question marks about Vargas’ talent. But then again, we have the same question marks hovering over the head of Broner, who has been fighting more like a high-level journeyman in the last 5 years than a world class fighter.