Canelo and Golovkin’s representatives to meet with Nevada Commission today 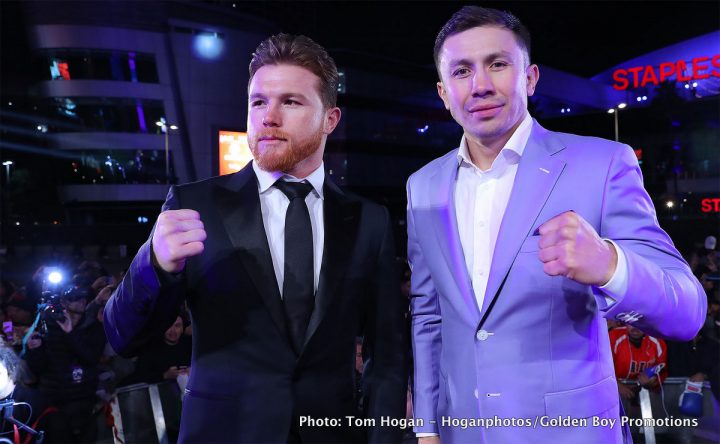 By Jeff Aranow: The Nevada State Athletic Commission will be meeting with the representatives for middleweight champion Gennady ‘GGG’ Golovkin and Saul Canelo Alvarez today in Las Vegas as part of the investigation of Canelo.

The Commission will be discussing the two positive tests for Canelo for the banned substance clenbuterol, which he tested positive for last February. Canelo’s promoters at Golden Boy and GGG’s promoter Tom Loeffler will be at the meeting today.

According to the LA Times, the Nevada Commission will have an anti-doping expert will talk about Canelo’s positive tests for clenbuterol. It’s unclear whether the doping expert will suggest that Canelo’s lower levels of clenbuterol that he tested positive for are consistent with the excuse given by his team that he ate contaminated meat in Mexico. The low levels of the drug in Canelo’s system could have been caused by contamination from him eating meat, but there are also some boxing fans who believe that the lower levels merely indicate that he stopped using the drug earlier and that the levels had dropped. The anti-doping expert will likely talk about that possibility as well. It’ll be up to the Commission to decide whether Canelo’s contaminated meat excuse is plausible.

Golovkin, 35, told the media this week that he believes Canelo’s positive tests for clenbuterol came from him having used the drug knowingly to gain an edge against him in their upcoming rematch on May 5 on HBO pay-per-view at the T-Mobile Arena in Las Vegas, Nevada. The drug helps a person with their stamina and conditioning, which would helpful for a fighter with issues with their endurance during their fights.

Canelo looked very tired last September in his fight against Golovkin. The fatigue factor is largely would kept Canelo from winning the fight. He was tired during most of the rounds in the fight. From rounds 3 to 12, Canelo was only able to fight hard for a small portion of the rounds at the very beginning. He would quickly fade after a minute and spend the last two minutes of those rounds looking to escape Golovkin’s pressure. The judges scored the fight a controversial 12 round draw, but the boxing public saw it as a clear win for Golovkin. GGG thinks Canelo used the banned drug before their fight last September as well. Canelo tested negative for the drug tests leading up to the first fight against Golovkin. However, the testing started during the training portion in the 8 weeks before the fight.

In the past, Francisco Vargas and Erik Morales tested positive for clenbuterol, and they were given the green light to still fight after they too pointed out that it was a contamination issue.

The Nevada Commission still hasn’t decided about whether to clear Canelo and let him face Golovkin on May 5th. A lot of boxing fans believe that the Commission will do nothing, and just require that Canelo be tested more frequently during the remaining weeks of training up until the fight. If the Commission does cancel the Canelo-GGG fight, then Golden Boy will need to decide whether to attempt to reschedule the rematch for later this year in September.

Canelo only fights twice a year in May and September on the Mexican holidays. If Canelo can’t fight in May, then Golovkin will need to find another opponent unless Golden Boy Promotions says he can’t fight until the rematch takes place. In that case, Golovkin will lose a year of his career waiting for his rematch with Canelo. Golovkin fought Canelo last September, and he’s been waiting for the rematch ever since. Golovkin wanted to fight Canelo last December, but the Mexican star preferred to wait until May 5. If the Canelo vs. Golovkin 2 rematch takes place on that date, Golovkin will have been out of the ring for eight months. The passage of time potentially impacts Golovkin more than Canelo, because he’s older at 35 now. It works against Golovkin to have the rematch pushed into the future.

”They told us to go to the office in Las Vegas, and that’s where we’re going to go,” Golden Boy Promotions president Eric Gomez said to the latimes.com about Golden Boy meeting with the Nevada Commission in Las Vegas for today to discuss Canelo’s investigation.

If Canelo fights with a lot more energy in the May 5th rematch against Golovkin, a lot of boxing fans are going to be pointing fingers and thinking that it’s because of the benefit of the drug clenbuterol in helping his conditioning. That’s the downside of Canelo having tested positive for this drug last February. If he fights with more energy than in the first fight, he won’t get as much credit by fans.

Saunders: “Golovkin is my backup plan” »