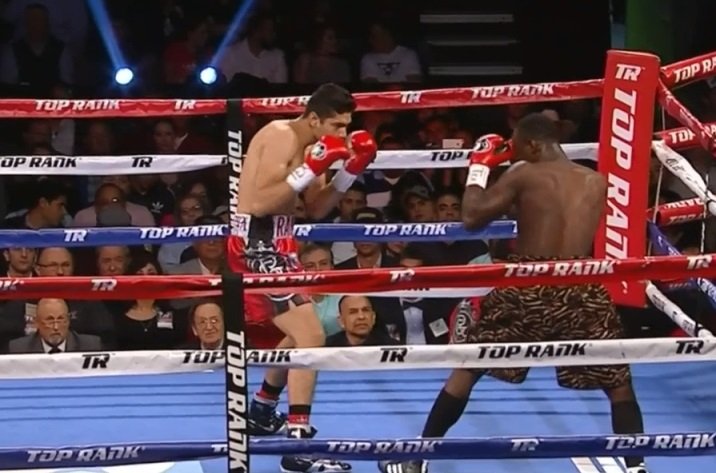 There were 2 very good fighters on this ESPN televised card in Gilberto Ramirez and Jerwin Ancajas, but unfortunately, they were matched against 2 very, very bad opponents. The fights were less than compelling to watch.

It would have been a better idea for Top Rank to match these 2 champions in their stable against good opposition, because their fights were so instantly forgettable due to the one-sided nature of both bouts. Boxing fans get amnesia when they see mismatches. The fights that stay in the memory of the fans are competitive ones involving good opposition, which unfortunately was lacking entirely from last Saturday’s televised Top Rank card on ESPN.

The stork-like 6’2 ½” Ramirez was matched against a short fighter named Habib Ahmed (25-1-1, 17 KOs), who wanted no part of fighting, and spent virtually the entire 6 rounds of the contest running and trying to survive. Ramirez chased Ahmed around the ring, punishing him with body shots and hooks to the head. There were many missed punches by Ramirez due to him having not the greatest accuracy, but mostly because Ahmed was running so much. In round 6, Ramirez caught Ahmed with a couple of big hooks to the head that snapped his head back violently. The referee Lawrence Cole decided he’d seen more than enough of this cat and mouse and he chose to stop it a 2:31 of the 6th. This was one of the poorer fights that Ramirez has been involved in. It’s not that Ramirez isn’t a good fighter. It’s more of a case of Top Rank matching him with a badly over-matched opponent.

Ancajas battered his opponent Israel Gonzalez (21-2, 8 KOs) at will, knocking him down twice in scoring a 10th round knockout. Gonzalez was knocked down by left hands from Ancajas in rounds 1 and 10. At no time in the fight was Gonzalez a threat to beating Ancajas. It wasn’t as bad of a mismatch as the main event between Gilberto Ramirez and Habib Ahmed. Nothing could be that bad, but it was still a very one-sided contest involving Ancajas hitting Gonzalez with left hands for 10 rounds. Gonzalez did land some nice body shots in the fight, but he was unable to get any kind of momentum going due to Ancajas landing his right-hand jabs and his straight lefts.

To get better ratings in the future, Top Rank is going to need to put Ramirez and Ancajas in with better opposition. They’re going to need to take some risks with these 2 fighters. It looks like Top Rank will continue to put the two on the same card in hopes of attracting more boxing viewers with this 1-2 punch, but they need to at least put them in with fighters with halfway decent talent. Ancajas can beat better opposition than Gonzalez. Top Rank needs to try to match him up against WBA 115 lb. champion Khalid Yafai, Roman ‘Chocolatito’ Gonzalez, Carlos Cuadras, Juan Francisco Estrada, Srisaket Sor Rungvisai or Rau’Shee Warren. Those guys would give Ancajas a very tough fight, and they might all beat him too. If Ancajas can’t defeat any of those fighters, then Top Rank is wasting their time trying to turn a star out of him. What’s the point of trying to turn Anajas into a star if he’s more of a 2nd rate champion rather than the real thing. It would be good for Top Rank and for the boxing public to find out sooner rather than later whether Ancajas is able to compete with the best fighters at super flyweight.

Gilberto Ramirez says he wants to fight the winner of the World Boxing Super Series super middleweight tournament. I don’t know if that’s going to happen. It could happen if Top Rank makes a big offer to get the winner of the WBSS tournament to face Ramirez, but it might not be worth it for the winner of that series. Ramirez is busy padding his record and milking his title against weak opposition. What that means is it doesn’t make it worthwhile for the WBSS winner to face him, because he’s not taking any risks to increase his popularity by fighting good opposition. It’s not Ramirez’s fault. He’s not the one that picks his opponents to fight. It’s Top Rank that does that. It’s just that he’s the one that suffers in the end, because the top fighters might not want to face an obscure champion that is milking his title. If Ramirez is unable to fight the winner of the WBSS, then it’s possible that Top Rank will match him against #1 WBO Jesse Hart in a rematch. The two fought each other last September in a grueling fight that saw Ramirez beat Hart by a close 12 round unanimous decision by the scores 115-112, 114-113 and 115-112. The World Boxing Organization didn’t lower Hart (23-1, 19 KOs) in their top 15 rankings despite his loss. Hart is still ranked No.1. Hart fought on the undercard of the Ramirez vs. Ahmed card last Saturday night and he stopped journeyman Thomas Awimbono (25-8-1, 21 KOs) in the 1st round. Hart had the best performance of the night by far on the card. The only reason Hart didn’t get as much credit as he deserved is because he was matched against a 2nd tier opponent in an off-television fight. Hart can beat much better opposition than Awimbono. Hart also beat Ramirez last time.

Mayweather and McGregor in talks for rematch »