Mayweather and McGregor in talks for rematch 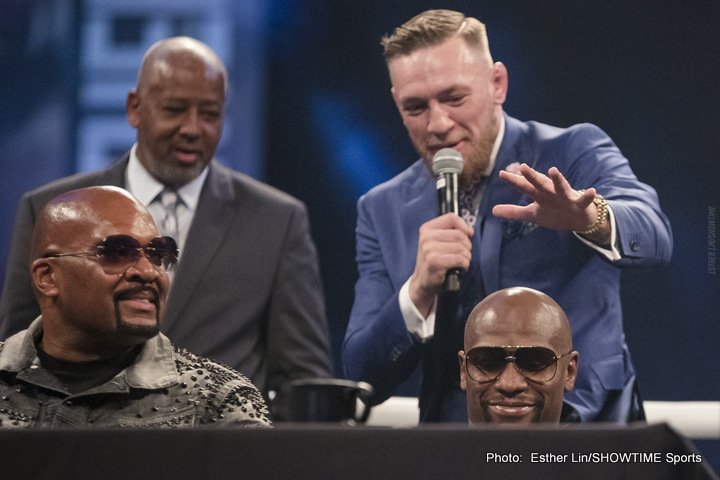 By Allan Fox: Floyd Mayweather Jr. and Conor McGregor are said to be in talks for a huge multi-million rematch in a MMA fight in the octagon, according to TalkSports. Writer Gareth A. Davies says McGregor, 29, and Mayweather are in discussions for a second fight between them. Mayweather and McGregor fought last August in a boxing match on Showtime.

The fight brought in 4.3 million pay-per-view buys. McGregor is said to have made $100 million and Mayweather considerably more. Davies thinks the Mayweather-McGregor rematch could do $500 million.

That’s a believable number because a lot of fans would like to see Mayweather get beaten, even if it’s in an MMA match. Mayweather has a way of selling his fights to boxing fans that want to see him lose, and then he never does. Mayweather laughs all the way to the bank.

McGregor last competed in the UFC in November 2016 in defeating Eddie Alvarez at UFC 205. It’s likely that McGregor is done with the UFC with the potential fight with Mayweather being his last contest with them.

Mayweather posted 2 videos last week of him inside the octagon walking around, looking like he’s ready to fight an MMA match. Mayweather is a tremendous competitor, but with the money that he can make fighting McGregor in a rematch in the octagon, he would make a monstrous amount of money. A fight between Mayweather and McGregor under MMA rules in the UFC would bring in boxing and the Mixed Martial Arts fans.

It would take a lot of courage on Mayweather’s part to swallow his pride and face McGregor in an MMA fight. Mayweather would have to know that he would be going into the fight with McGregor with next to no chance of winning. McGregor would only need to grab Mayweather once to finish him off, because he doesn’t have the grappling background or the years of training in submission holds that the Irish fighter has. McGregor is considered the best fighter in the UFC, and he would be facing a novice in Mayweather. It would be a terrible mismatch.

It would be interesting to see if McGregor decides to carry Mayweather for a prolonged period before he puts him away. Mayweather admitted to carrying McGregor for 10 rounds in their fight on August 26. But if McGregor doesn’t carry Mayweather, then the fight is going to be over with in the 1st round. McGregor can pick and choose how he wants to stop Mayweather. McGregor could knock him out with a kick or take him to the mat and put him in a submission hold. The worst thing that McGregor could do is take Mayweather down and punch him in the face repeatedly until the fight is stopped. That would be brutal.

Mayweather might get lucky and score a knockout if he’s able to land some big shots before McGregor is able to take him to the ground. If Mayweather were younger and more active, he would have a good chance of stopping McGregor before he could get his hands on him. But with Mayweather about to turn 41, and him no longer fighting since 2015 in a real fight, McGregor will likely have minor problems taking him down.

Knowing Mayweather, he’ll use his A-side pull to have the rules changed to where McGregor isn’t allowed to do certain things like kick and take him down to the mat. Don’t be surprised if Mayweather forces the rules to be changed to benefit him. If McGregor can’t kick or take Mayweather down to the ground, it would mean it would be a stand-up fight with smaller gloves. It would be another mismatch favoring Mayweather. Hopefully we don’t see the MMA rules changed for Mayweather to get a huge edge.

The question is when will Mayweather & McGregor choose to fight each other? With the rematch between IBF/IBO/WBA/WBC middleweight champion Gennady ‘GGG’ Golovkin and Saul ‘Canelo’ Alvarez taking place on May 5th on HBO PPV, Mayweather could elect to undermine the fight – again – if he schedules his rematch against McGregor in the weeks ahead of that fight. Canelo’s promoter Oscar De La Hoya of Golden Boy Promotions said he doesn’t think Mayweather will fight McGregor again, and he seems him just bluffing. If De La Hoya is wrong about this, Mayweather could hurt his Canelo-GGG card in a big way if he fights McGregor just ahead of that fight on Showtime PPV. Mayweather did that the last time Canelo and Golovkin fought each other on September 16th. Mayweather scheduled the McGregor fight on August 26th and charged $100 per household to order it. Obviously, a lot of fans did purchase it with 4.3 million buys being generated. That might have cost the Canelo vs. Golovkin fight a lot of lost PPV buys from boxing fans not being able to afford to purchase that card after they spent their money ordering the Mayweather-McGregor fight.

Pacquiao to fight on April 14, then face Lomachenko in November »