Linares tells Golden Boy to make Lomachenko fight for May 12 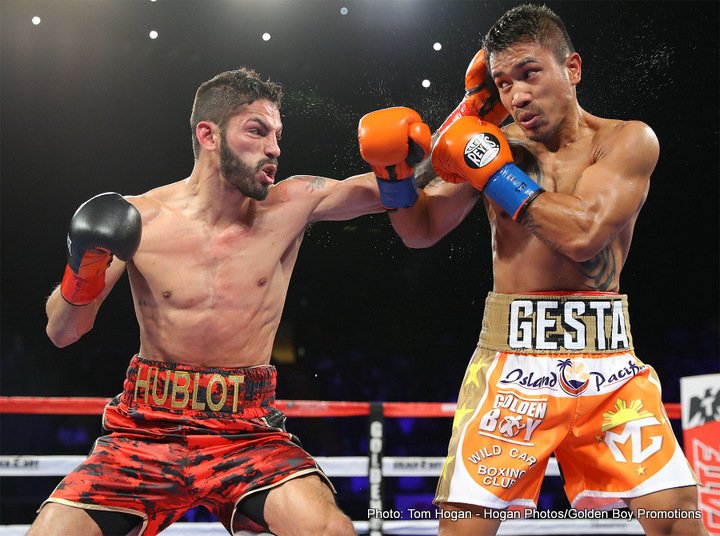 By Chris Williams: Jorge Linares says he’s going to tell his promoters at Golden Boy Promotions to make the fight with Vasyl Lomachenko for May 12th for the sake of boxing,. Linares (44-3, 27 KOs) is insisting Golden Boy put the fight together with the Top Rank promoted Lomachenko (10-1, 8 KOs) for May 12 on ESPN, even though by doing so, Golden Boy would be competing with themselves due to them having the Saul ‘Canelo’ Alvarez vs. Gennady ‘GGG’ Golovkin replay taking place on the same night on HBO.

It’s a replay of their upcoming May 5th rematch on HBO pay-per-view. That fight is expected to bring in massive pay-per-view buys on HBO, and the replay figures to attract even more viewers due to it being on regular HBO.

”Vasyl Lomachenko, I know you are ready for May 12. Also I am too. I don’t want politics to interfere with our bout. I will tell my promoter Golden Boy Boxing no matter what will take the fight for the benefit of boxing and the fans. #teamlinares,” Linares said on Twitter.

Golden Boy are planning on not only televising the Canelo vs. GGG replay on May 12 on HBO, but also another fight as well. They’re not going to agree to let their fighter Linares ruin their plans just so he can fight Lomachenko and likely lose badly. It’s a bad deal for Golden Boy. If Linares fights Lomachenko on the same night as the Canelo vs. Gennady replay, then that’ll take away viewers for that match.

It’s important for Golden Boy that as many boxing fans see the Canelo vs. Golovkin replay as possible, as they want to get fans interested in a 3rd fight between them. Golden Boy won’t be able to do that if fans are watching Linares and Lomachenko fight on ESPN on May 12. It could turn out to be an all-around situation for Golden Boy with Linares fighting Lomachenko on the same night as their replay of Canelos fight, and then losing the fight.

Linares isn’t expected to beat Lomachenko. I doubt that the brass at Golden Boy believes Linares will beat Lomachenko. So why would they be so eager to let him fight on May 12th and spoil the Golovkin-Canelo replay? It works out poorly for Golden Boy if they give in and give Linares wants he wants in facing Lomachenko on May 12. Somebody from Golden Boy has to break the news to Linares that the sport of boxing is a business.

Golden Boy has to do the right thing and that’s to make sure their own fighters aren’t spoiling their efforts at bringing in the biggest ratings for the fights that are important to the boxing public. Linares has plenty of time to fight Lomachenko later in 2018. There’s nothing golden about fighting him on May 12th just because Top Rank wants to schedule Lomachenko’s fight on the same night as the Golovkin vs. Canelo HBO replay.

Golden Boy wants to make the Lomachenko fight for Linares, but obviously not if it ends up hurting the Canelo-Golovkin replay, which will likely bring in more viewers than the Linares vs. Lomachenko fight. The boxing public will likely have far more interest in seeing the Canelo vs. Golovkin 2 replay than watching a couple of lightweights they’re not familiar with. Top Rank should know for themselves that it’s a rotten idea to have Lomachenko compete against the Canelo-GGG 2 replay. It’s a dumb idea to have Lomachenko fight on the same night as the replay of the much bigger fight involving Canelo and Golovkin. It’s common sense that you don’t want to have a couple of lightweights in Linares and Lomachenko fighting on the same night as the Canelo vs. GGG replay. Even the hardcore boxing fans will likely be tuning in to watch Canelo and Golovkin fight it out on replay rather than turning the channel to see Linares and Lomachenko fight. That’s a good fight, but we are talking about a fighter that has been beaten 3 times in his career in Linares. The knowledgeable boxing fans see this fight as a slam dunk win for Lomachenko. It would be the casual fans that wouldn’t be aware of who is going to win the Linares-Lomachenko fight, and they’ve probably never heard of either of those guys.

Linares might have to speak with his co-promoter Mr. Honda of Teiken Promotions to see if he can override Golden Boy Promotions for what they want. I don’t think it’s going to work though. Golden Boy is said to be in control of Linares’ fights in the U.S. So unless Top Rank is interested in taking the Linares vs. Lomachenko fight outside of the U.S on May 12th, they’re going to have to look for another date for that fight. Lomachenko is going to fight on May 12th regardless. If Lomachenko doesn’t fight Linares on that date, then he’ll possibly face Raymundo Beltran if he beats Paulus Moses this Saturday night in their fight for the vacant WBO lightweight title. Lomachenko would be facing Beltran for the WBO lightweight belt if he captures the title this Saturday.

Beltran can’t afford to suffer an injury during the Moses fight for him to be able to get back in the ring within 3 months to face Lomachenko on May 12. This is likely going to be the opponent for Lomachenko on May 12th, because I can’t see Golden Boy sabotaging the very important Gennady vs. Canelo 2 replay on HBO by scheduling a fight for Linares on the same night but on a different channel on ESPN.

If the shoe was on the other foot and Top Rank was being put in the same situation with a Terence Crawford replay being shown on May 12th, it’s highly unlikely Arum would be eagerly schedule a fight on a different channel on the same night. Arum is trying to turn Crawford into a pay-per-view attraction. He wouldn’t foil his own efforts by scheduling a fight on a different channel. It’s no skin off Arum’s teeth that Golden Boy has the Canelo vs. Golovkin 2 replay on the same night as his planned Lomachenko-Linares fight, because neither of those 2 stars is with his Top Rank company. It’s still not a bright idea for Arum to schedule Lomachenko to fight on May 12th, knowing that a lot of the boxing public will be watching the Golovkin-Alvarez 2 replay on HBO.