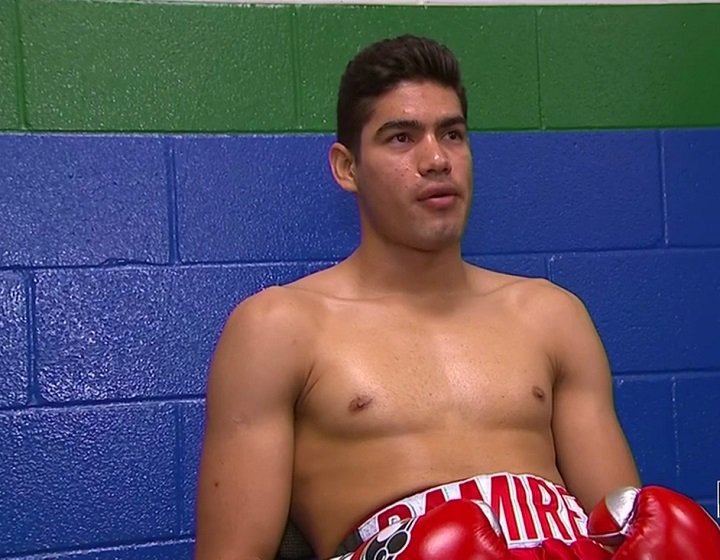 Ramirez worked over Ahmed in hurting him with hooks to the head in the 6th to get the stoppage in front of a large crowd at the Bank of America Center in Corpus Christi, Texas. Ramirez, 26, wants to move his career forward to unify the 168 lb. division against the other champions.

Ramirez feels that he’s ready to beat all the top fighters at super middleweight, and he’s just waiting for his chance to prove himself. It’s going to come down to whether Top Rank promoter Bob Arum can come up with a big enough offer to get the winner of the World Boxing Super Series [WBSS] super middleweight tournament to face Ramirez.

If the money is not there, then the winner of the WBSS tournament isn’t going to invest their time in fighting the 6’2 ½” Ramirez. They’ll leave him to keep defending his WBO 168 lb. title against fighters like Ahmed, Jesse Hart and Max Bursak. In other words, Ramirez would be left to toil away in obscurity, facing guys that the boxing public has little interest in seeing him fight on ESPN. If that’s the case, then Arum is going to have to be a little more inventive in his match-making for Ramirez by making some big offers to light heavyweights like Sergey Kovalev, Dmitry Bivol, Adonis Stevenson and Artur Beterbiev to fight him. If the top super middleweights don’t see any point in fighting Ramirez and if the top middleweights like Gennady ‘GGG’ Golovkin, Daniel Jacobs and Saul Canelo Alvarez won’t fight him either, then Arum is going to have to look at matching his Mexican fighter against the top 175 lb. fighters and hope that he won’t fall apart against them.

“I would like to fight with anybody in a unification fight,” Ramirez said. “I want to fight the other champions. Anywhere. I don’t care. I am ready for anyone. I want the winner of the tournament. I want Bob Arum to make that fight.

It’s not about the location of the fight holding back Ramirez getting a crack at the winner of the WBSS tournament. It’s likely more about Ramirez not having a big enough name for him to be worthwhile to face. Top Rank has done Ramirez no favors in matching him poorly against no name fighters since he captured the WBO 168 lb. title in beating champion Arthur Abraham by a 12 round unanimous decision in April 2016. It doesn’t matter that Top Rank is paying to have Ramirez’s fights televised on ESPN.

Ramirez is not being matched against good fighters that the boxing fans are familiar with and care to see, so he’s not progressing in terms of becoming more popular. Last Saturday night’s fight between Ramirez and Ahmed was a really hard fight to watch due to how noncompetitive it was. Ahmed didn’t fight like a world class fighter. Top Rank found Ahmed for Ramirez to fight, and perhaps they assumed that the casual boxing fans would be impressed by the Ghanaian fighter’s 25-0 record coming into the match. That’s not how casual fans judge whether fights are interesting or not. They tend to ignore the droning on by the commentators when they mention a fighter’s record. They’re more focused on whether the fighter can actual fight and it was clear as day that Ahmed was a terrible fighter. Ramirez looked like a big cat chasing around his food last night, and it so horrible to watch. It looked like a light heavyweight fighting a small middleweight. Ahmed is too small for the 168 lb. weight class, and he didn’t belong inside the same ring with the light heavyweight-sized Ramirez.

There’s nothing wrong with Ramirez having a pipe dream of wanting to be the No.1 best pound-for-pound fighter in boxing, but that clearly is not going to happen. Ramirez doesn’t possess that kind of talent. Ramirez is not going to be a No.1 pound-for-pound fighter with his promoters at Top Rank feeding him over-matched guys like Habib Ahmed and Max Bursak. It’s very hard to understand why a major promotional company like Top Rank would continually match Ramirez against such mediocre talent. Someone at the top of the food chain with the promotional company is not seeing the big picture in how they’re blowing it when it comes to the way they’re matching Ramirez. If Top Rank is going to keep matching Ramirez poorly, he’s never going to have a large fan base no matter how many times they televise his fights on free television on ESPN.

The punch stats last night showed clearly how much of a massacre Ramirez’s fight with Ahmed was. Ramirez landed 123 of 406 punches for a connect percentage of 30 per CompuBox. Ahmed landed just 22 of 190 punches for a mere 12% connect rate. Those stats show that last night’s Ramirez-Ahmed fight was a pure massacre in every sense of the word. The thing is the fight was predicted to be a total rout even before the contest. The fight was won by Ramirez the moment the contract was signed, and it is too bad Top Rank chose to make such a terrible fight. Surely, they can do better than this for Ramirez. If they can’t, then it’s going to be a wasted career for Ramirez. Even if he finishes his career with an unbeaten record, if all he must show for his career is wins over obscure fringe level fighters, then he’s not going to become a star. You’ve got to feel sorry for Ramirez in how he’s being wasted. Top Rank shouldn’t have matched him against Ahmed or Max Bursak. Those were wasted fights for Ramirez that did nothing for his career. To get the best fighters to want to face Ramirez, he’s got to be fighting quality competition to make it worthwhile for them to want to mix it up with him. Right now, Ramirez is not fighting good enough opposition to make him a good option for the winner of the WBSS tournament to fight him.


« Sanchez dares Canelo to try and knockout GGG on May 5th