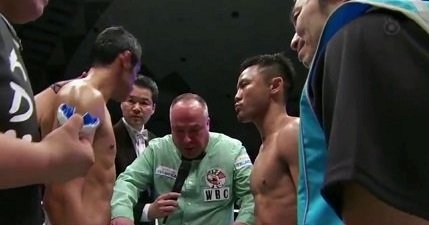 The 22-year-old Higa landed a crushing right hand to the midsection of the fringe contender Fuentes to put him down on his hands and knees on the canvas. Fuentes was able to beat the count, but the referee Len Koivisto chose to halt the fight anyway. The official time of the stoppage was at 2:32 of round 1.

The fight was expected to be a mismatch anyway, but it wasn’t supposed to be a 1 round job. Fuentes fought the wrong kind of fight for him to last more than 1 round. It’s almost as if Fuentes was begging to be knocked out with his decision to go straight into the teeth of Higa’s offense to try and mix it up with him.

Most boxing fans expected the over-matched 30-year-old Fuentes to at least make it to the 6th round before he was knocked out, but he fought a really dumb fight. Instead of trying to box the tornado-like Higa, Fuentes went right after him and started slugging from the opening bell. Higa was totally at home in being able to brawl with the over-matched Fuentes.

Fuentes did land some nice shots in attacking Higa. The defensive ability of the Japanese fighter was far from great. Higa’s offense was his defense. Higa was counting on winning the fight by being busier and landing the more hurtful punches than Fuentes, which is obviously why he was able to win the fight. If this was a talented flyweight like Donnie Nietes, I don’t know that Higa would have had the same kind of success against him. Higa will need to have more going for him than simply trying to overwhelm Nietes if the two of them ever fight each other in a unification match, which I don’t know that they ever will fight.

The victory for Higa was his second successful title defense of his World Boxing Council flyweight title. Higa previously stopped Thomas Masson (17-3-1) in the 7th round last October. Higa hasn’t faced anyone talented yet. With Higa’s promoters picking out the struggling Fuentes as his opponent for tonight, it doesn’t look like they’re interested in putting him in any risky fights.

Fuentes came into tonight’s fight with 2 losses in his last 3 fights. You don’t normally see fighters with poor records like that getting title shots, but it looks like Higa’s promoters wanted an easy mark and they spotted the perfect opponent in Fuentes. The Mexican fighter recently lost to journeyman Ulises Lara (17-15-2) and Kosei Tanaka (7-0). Fuentes was knocked out by Tanaka in the 5th round in December 2016. Fuentes also has past losses to WBO World light flyweight champion Donnie Nietes and Juan Hernandez Navarrete.

Bellew: If I land my left hook on Usyk, it will have an effect »