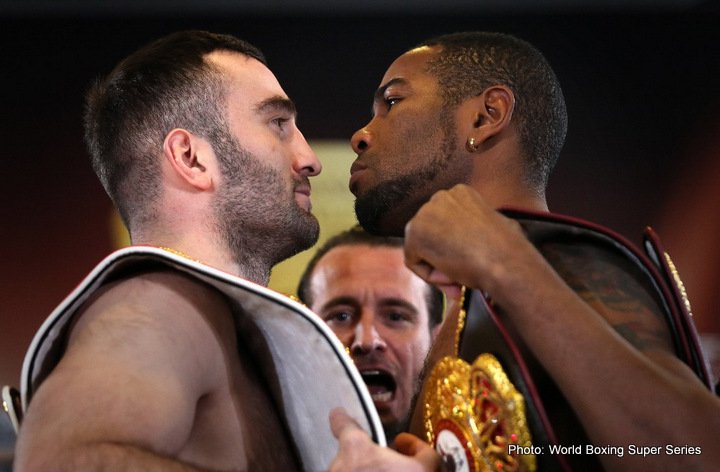 By Allan Fox: Murat Gassiev (25-0, 18 KOs) and Yunier Dorticos (22-0, 21 KOs) will be meeting in just a few hours for their crucial semifinals fight in the World Boxing Super Series (WBSS) to find out which one will be taking on WBC/WBO cruiserweight champion Oleksandr Usyk (14-0, 11 KOs) in the finals of the tournament on May 11.

Usyk, 31, has already arrived for tonight’s Gassiev-Dorticos fight, and he’ll be sitting among the boxing fans watching the action to find out which of the 2 hard hitters he’ll be facing next May.
Gassiev vs. Dorticos will be taking place tonight at the Bolshoy Ice Dome in Adler, Russia. The undercard is filled with obscure fighters. There aren’t any big names unfortunately. Former super middleweight champion Fedor Chudinov is on the undercard facing journeyman Timo Laine. In earlier action on the Gassiev-Dorticos card, unbeaten lightweight Roman Andreev (21-0, 15 KOs) defeated the light hitting Craig Evans (17-2-2, 3 KOs) by a 9th round knockout. This was a mismatch unfortunately, even though Evans came into the fight with just 1 loss on his resume. It was still an uneven fight on paper going into the contest.

The 24-year-old Gassiev states that he’s not feeling any pressure whatsoever for the Doricos fight. The Russian fighter Gassiev is not worried at all about Dorticos’ punching power. He plans on going to war with the Cuban and making him deal with having to take huge shots for as long as the fight lasts. Gassiev says he’s prepared for a 12 round fight if it goes that long, but he wants to make sure those rounds are all VERY difficult ones for the unbeaten Dorticos.

Gassiev wants Dorticos to have to take huge shots in each round. He’s not going to let Dorticos have an easy time like his last opponent Dmitry Kudryashov did last September in their quarterfinals match in the World Boxing Super Series in San Antonio, Texas. Dorticos got away with hitting Kudryashov hard with a right hand that came after the 1st round had ended. Kudryashov had his hands down and he was nailed hard after the bell sounded to end round 1. The referee Rafael Ramos didn’t penalize Dorticos for the punch after the bell. Hopefully, we don’t see Dorticos landing punches after the bell tonight to gain an edge against Gassiev. It would be in Gassiev’s best interest to make sure that he keeps his guard up after the round ends just in case Dorticos decides to foul. It would be bad for the WBSS tournament if Gassiev is hurt by an illegal punch thrown by Dorticos after the bell. You never know what a fighter is willing to do when they’re desperate to win a fight, as we saw with Dorticos against Kudryashov.

“I don’t feel any pressure at all,” Gassiev said. “I see a future in the tournament after this fight. I will do my job.”

Landing body shots is one thing that Gassiev will almost surely be looking to do tonight. Most fighters that have fought Dorticos in the past have put their focus on throwing to the head. Dorticos, 31, seems to take head shots well, but he might not be able to handle the body shots nearly as well. Gassiev knocked out his last opponent Krzyztof Wlodarczyk (53-4-1, 37 KOs) with a hard body shot in round 3 of their quarterfinals fight last October in Newark, New Jersey.

Gassiev looked very patient in that fight, in slowly stalking the 36-year-old Polish native Wlodarczyk around the ring for the first 2 rounds. In round 3, Gassiev caught up to Wlodarczyk and hit him with a blinding fast left uppercut to the head followed by a left to the body. Wlodarczyk looked stunned from the uppercut, but the body shot that followed almost instantly was too much for him to take. Wlodarczyk dropped to the canvas with a look of pain and agony on his face as he clutched his midsection.

If Gassiev lands a similar body shot tonight against Dorticos, the fight is likely going to end at that time. Dorticos will probably try and throw body shots himself in order to test Gassiev’s body. We might discover that Gassiev can’t handle body shots any better than Wlodarczyk. But then again, we might out that he can, and if that’s the case, he’ll be looking to counter the Cuban with a hook or straight right to the head. It’s risky to throw body shots when facing power punchers in the Gassiev and Dorticos class. They’ll be taking a risk when they throw to the body. Gassiev has shown that he’s got a tough chin and can take power shots well. Gassiev was hit a lot with some big punches in his 12 round split decision win over southpaw Denis Lebedev in December 2016.

Gassiev took Lebedev’s best punches for 12 rounds and landed some huge punches that badly bruised both of his eyes. If tonight’s fight turns out to be a similar war of attrition, it’s going to be an exciting affair. Dorticos is more of the type that likes to keep the action on the outside where he uses the distance to load up on his shots. We don’t know how Dorticos handles being crowded and pressured on the inside. The younger 24-year-old Gassiev is likely going to be stalking Dorticos around the ring in an effort to wear down the older 31-year-old fighter. That’s not old for a fighter, but we don’t know how well Dorticos is going to be able to handle the pressure that’s put on him from Gassiev. Dorticos has not had to face a pressure fighter yet during his pro career. Dorticos fought Artur Beterbiev while an amateur, but he didn’t do well against his pressure style of fighting. Beterbiev knocked Dorticos out in 1 round. Dorticos likely has a good explanation for what went wrong for him in that fight. Perhaps he got careless and didn’t see Beterbiev’s enormous power shots.

“I will end the fight before the fifth round. I will kick his ass in front of his own fans,” Dorticos said. ”Russian fans and boxing fanatics all over the world will learn what the ‘KO Doctor’ is about!”

Dorticos believes he’s going to do to Gassiev what he did to the 32-year-old Russian Kudryashov in knocking him out in the 2nd round of their fight in the WBSS tournament last September. It’s hard to say that Gassiev is going to crumble quickly in an equivalent manner, as Kudryashov had a history of being knocked out early in his contests. Gassiev hasn’t shown the same fragile chin that Kudryahsov had displayed before his fight with Dorticos. The thing is if Dorticos is forced to fight a long, grueling battle against Gassiev, he’s going to need to take a lot of heavy shots in this that he might not be able to take. We’ll have to see, but it’s going to be hard for Dorticos to win this fight if he can’t take Gassiev’s power.

Doricos’ resume has been built on him fighting weaker opposition. Dorticos has fought 2 good opponents in his 9-year pro career and those are Youri Kayembre Kalenga and Kudryashov. The rest of the fighters that Dortios have fought have been C-level opposition like Galen Brown (44-30-1), Fulgencio Zuniga (27-11-1), Edison Miranda (35-9), and Eric Fields (24-2). Those were recent fights for Dorticos. Those are journeyman fighters that Dorticos was fighting in 2014 and 2015. In 2016 and 2017, Dorticos stepped it up a notch in fighting Kalenga and Kudryashov, both of which he knocked out. Kalenga made it to the 10th round against Dorticos. If Gassiev is able to last that long tonight, it could end badly for Dorticos, because that would mean that he’ll need to take the Russian fighter’s huge power shots for that many rounds to get to that point. I don’t think Dorticos will be able to handle Gassiev’s shots that long in the fight before he gets hurt.

Dorticos will have early success against the slower, shorter Gassiev, but the fight is going to end quickly with the Russian knockout artist landing one of his big left hooks to the body that will end the contest. Dorticos is totally unprepared for the kind of power shots that Gassiev is going to be hitting him with. Dorticos had a good amateur career, but it’s been many years since he was never the best in his own country of Cuba. There was always someone better than him. Dorticos lost to Eastern European fighters Artur Beterbiev, Dmitry Chudinov and Yerdos Dzhanabergenov in the amateurs. All 3 of those fighters stopped Dorticos early in their fights. That suggests that Dorticos has a chin problem, and if he can’t take a punch, he’s not going to last long against Gassiev tonight. It’s going to be survival of the fittest tonight. If Dorticos wants to win, he’s got to jump on Gassiev quickly in the 1st and 2nd rounds and shoot for a fast knockout like he did against Kudryashov. If Gassiev can hang around past round 2, the chances of Dorticos getting knocked out will increase exponentially from that point.

British Lionhearts with 3-2 defeat in Paris »