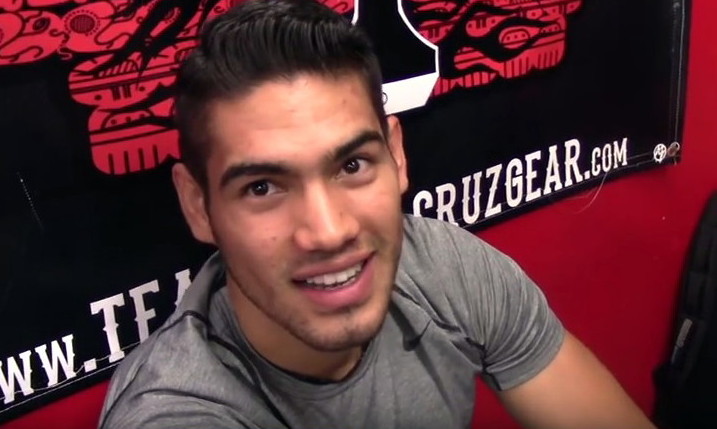 By Chris Williams: Gilberto Ramirez, challenger Habib Ahmed, Jerwin Ancajas and Israel Gonzalez made weight on Friday for their fight this Saturday night on ESPN at the American Bank Center, in Corpus Christi, Texas. This is a Top Rank promoted card, with main event and co-feature fights being mismatches. These are both showcase fights. In other words, mismatches, which is why the boxing public isn’t too excited about the fights. This will be defense No.3 for the Ramirez for his WBO 168 lb. strap.

Saturday’s Ramirez vs. Ahmed card will be televised on ESPN and ESPN Deportes. The start time is at 9:00 p.m. ET.

Ramirez hasn’t been matched 4 times a year since he signed with Top Rank. He fought 2 times in 2017 and only 1 time in 2016. To say that Ramirez will fight 4 times in 2018 is a pipe dream at best. If Ramirez fights 3 times in 2018, it would be a huge surprise. Ramirez takes too much punishment for him to be fighting more than 2 times per year. If Arum ever does have Ramirez fight 4 times per year, his career come to a speedy end with him being done by the time he hits 30. Ramirez needs to protect himself more, so he doesn’t take as many head shots as he did in his last fight against Jesse Hart last September. That was a grueling fight that was hard to watch. Ramirez was hurt on a couple of occasions, and he was fortunate to get the win. It’ll be interesting to see if Arum can match Ramirez with the winner of the WBSS tournament. I’d be very surprised if he can. I don’t see any upside for the winner of the WBSS tournament in facing Ramirez, because he’s not popular in the U.S, and that’s where he fights. Groves, Eubank Jr. and Callum Smith are better off staying in the UK and fighting guys over there. They fight in front of big crowds in the UK. They have no reason to want to spoil that by coming over to the U.S to fight a guy like Ramirez, who doesn’t have a fan base in the U.S or anywhere else.

“I’ve been following all those guys,” Ramirez said to espn.com. “Let’s make it happen with the winner of the tournament. I would like to be there. I want the good fights. I couldn’t participate so I want to look good here against Ahmed. All the guys (remaining in the tournament) are good fighters. But I don’t care who wins. I only care about the winner because that is who I want to fight. I don’t have any preference.”

I wouldn’t hold my breath if I were Ramirez waiting for the winner of the WBSS tournament to fight him, because I see it very unlikely that the winner will bother fighting him.

The 6’2 ½” Gilberto ‘Zurdo’ Ramirez (36-0, 24 KOs) will be defending his WBO super middleweight title against the tiny little known 5’8” Habib Ahmed (25-0-1, 17 KOs) in the main event in this ESPN televised card. Ahmed is ranked #4 with the World Boxing Organization. Ramirez weighed in at 168 pounds. His opponent Ahmed weighed in considerably less at 166.75 lbs. Ramirez came overweight by one-quarter pounds initially. But after stripping down, he was able to make weight. It’s no secret that Ramirez is having a hard time making weight for his fights at super middleweight. He’s going to have to move up sooner or later to the 175 lb. weight class if he wants to be able to fight at his best. I think we’re already seeing how making weigh is impacting Ramirez’s performances, because he barely won his last fight against Top Rank fighter Jessie Hart last September. It was a very close fight. Ramirez won, but it was not the kind of performance that instilled confidence in him that he’s going to last long as the WBO 168 lb. champion unless his promoters at Top Rank keep finding soft opponents like Ahmed for him to hold onto his title. But by matching Ramirez against soft jobs like Ahmed rather than talented contenders, Top Rank hurts his ability to try and become a star. This week, Ramirez said he wants to fight the winner of the World Boxing Super Series super middleweight tournament. He virtually ignored by the other fighters and their promoters. The reason for that is because he doesn’t fight good opposition, and he lacks a fan base. Ramirez’s fights don’t make news like other fighters in the 168 lb. division. That’s just the cold, brutal reality. Ramirez lacks the knockout punch to make him an exciting fighter like other super middleweights like Groves and Eubank Jr.

This is the 26-year-old Ancajas’s first fight in the U.S. He recently signed a deal with Top Rank to be part of their stable. Ancajas is seen as the next Manny Pacquiao. I don’t think he’s that kind of fighter unfortunately. He is the best fighter on Saturday’s card in my opinion, but he’s still not in the class of a young Pacquiao. Ancajas is considerably slower than Pacquiao when he was younger, and he doesn’t move as well. If you slow Manny Pacquiao down to one-half speed, then you have a fighter that resembles Ancajas, except he’s more of a body puncher than Manny ever was during his career. Ancajas likes to throw body shots, and he’s devastating at that. Ancajas hasn’t been beating the cream of the crop at 115. Ancajas’ recent wins have come against the likes of Jamie Conlan, Teiru Knoshita, Jose Alfredo Rodriguez, McJoe Arroyo and Paul Apolonario. Those are good fighters, but not the best. Ancajas might come unglued when he fights someone good. What we do know is Ancajas lost to Mark Anthony Geraldo by a 10 round majority decision in March 2012. There’s obviously some flaws in Ancajas’ game that Top Rank is concerned with; otherwise they would have been eager to have him take part in the SuperFly 2 card, so he could show off his talent by taking one of the best scalps in the division.

Top Rank wants to try and turn Ancajas into a star. Whether they’ll succeed in that goal is the big question. They’re doing it in the same way they’re trying to turn Gilberto Ramirez into a star by matching him against weak opposition. It would have been nice to see Top Rank have Ancajas compete in SuperFly 2 along with the other top super flyweights like Sriskaket Sor Rungvisai, Juan Francisco Estrada and Carlos Caudras. Arum is reportedly not interested in having Ancajas compete on those cards. That’s too bad because that’s how he could become a star much faster. Look at Rungvisai. He’s on the express trip to the top following his back to back wins over Roman ‘Chocolatito’ Ramirez in the last 2 SuperFly cards. Of course, if Ancajas competed in the SuperFly cards, he would be expected to compete against Rungvisai, and if he did that, he might wind up getting knocked out by the power hitting fighter from Thailand. Ancajas been looking good lately against the guys he’s been matched against by his promoters, but he’s not been fighting talented fighters like Rungvisai. That guy is like a smaller version of Gennady ‘GGG’ Golovkin with his punching power and his pressure style of fighting. Ancakas might not last long against a fighter like Rungvisai.

This is a voluntary defense for the 26-year-old Ramirez. It’s unclear why Ramirez’s promoters at Top Rank picked such an unknown fighter with an inflated resume like Ahmed. It’s a very strange match-up. The only thing I can think of for why Top Rank promoter Bob Arum made this horrible fight is he wants Ramirez to look better than he actually is, so he put him in this showcase fight/mismatch to make him look really good. That’s a smart move though, because Arum is hoping to turn Ramirez into a star. You don’t turn a fighter into a star by matching them against short obscure fighters that few boxing have ever heard of. Top Rank could have done a lot better than Ahmed for Ramirez’s next fight. Even a rematch with Jesse Hart would be leagues better than having Ramirez fight Ahmed. It’s a disappointing fight.

Other weights for Saturday’s card, #1 WBO light heavyweight contender Jessie Hart (22-1, 18 KOs) weighed in at 173.5 lbs. for his 10 round fight against journeyman Thomas Awimbono (25-7-1, 21 KOs). For his part, the 37-year-old Awimbono weighed in at 179.5 lbs. Awimbono has lost his last 3 fights in defeats to Mike Gavronski, Derrick Webster and Calbel Plant. About the only positive you can stay about those 3 losses is Awimbono at least didn’t get knocked out. The 28-year-old Hart needs to be fighting better opposition than this, a lot better. But what can you say when the main event has Gilberto Ramirez facing a horrible opponent as well, so it’s expected that the undercard fighters would be in the same situation.

Lightweight prospect Teofimo Lopez (7-0, 6 KOs) weighed in at 139.75 for his eight round fight against Juan Sanchez. He weighed in at 144.5 lbs. For a lightweight, Lopez and Sanchez are both pretty big for this fight.


« Hearn: Khan has spite now; he wants to slap Lo Greco around