Spence: Thurman can have a tune-up, but then must fight me 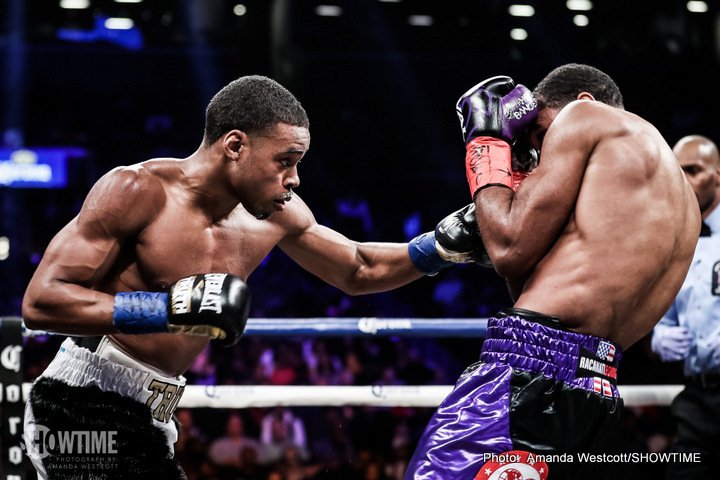 By Dan Ambrose: Errol Spence Jr. is now calling the shots, telling WBA/WBC welterweight champion Keith ‘One Time’ Thurman that he can have his tune-up fight in April, but after that he needs to fight him in a unification.

Spence (23-0, 20 KOs) might not have helped himself get the Thurman fight with his 7th round stoppage win over Lamont Peterson (35-4-1, 17 KOs) last Saturday night at the Barclays Center in Brooklyn, New York. Spence looked too good in that fight, and he might have scared off Thurman with that display of punching against the 33-year-old former 2 division world champion Peterson.

Thurman (28-0, 22 KOs) has fought just 2 times in the last 2 ½ years. Thurman is getting big paydays for fighting once 1 time per year for Premier Boxing Champions, and he’s spending much of the time recovering from different injuries. It’ll be lucky if the Thurman vs. Spence fight ever takes place at all, because negotiating the match-up could prove to be extremely difficult. If Thurman doesn’t want the fight with Spence, he can easily price himself out to avoid it.

Thurman needs to get some rust off in his next fight in April, which is said to be against former 2 division world champion Jessie Vargas. Spence is willing to give Thurman a pass for his April tune-up due to him coming off of an elbow injury. After that, it looks like Spence expects Thurman to fight him. However, Thurman has already ruled out fighting Spence in 2018, saying he’s got mandatory defenses he needs to get out of the way against Shawn Porter and Danny Garcia. If Thurman dodges the Spence fight, he’s going to look bad and have some boxing fans calling him ‘Run Time’ instead of his self-created nickname ‘One Time.’

Spence’s fight last Saturday against Peterson was for all intents and purposes a tune-up for him. Peterson is not the same fighter that he once was at this point in his career, and his inactivity in the last 3 years of his career has eroded his boxing skills. Peterson has not been all that active since 2015. Whether that’s his fault or his management’s fault is unclear. Spence needs to fight someone better in his next match in April or May.

“He said he’s a bigger puncher than these guys, but when’s the last time he got a knockout? The pedigree of opponent has raised and he’s not getting knockouts anymore. He was at one time, but now he’s not getting any knockouts,” said Spence in talking about Thurman.

Spence should think about taking some risks with his career by moving up in weight for his next fight. It’s not going to help Spence if his adviser Al Haymon trots out 36-year-old Luis Collazo for his next fight in April or May for his homecoming bout. Collazo is a very predictable opponent for Spence, because he’s one of the PBC fighters just like Peterson.

Joseph Parker: I’ll need to be Superman to beat Joshua »