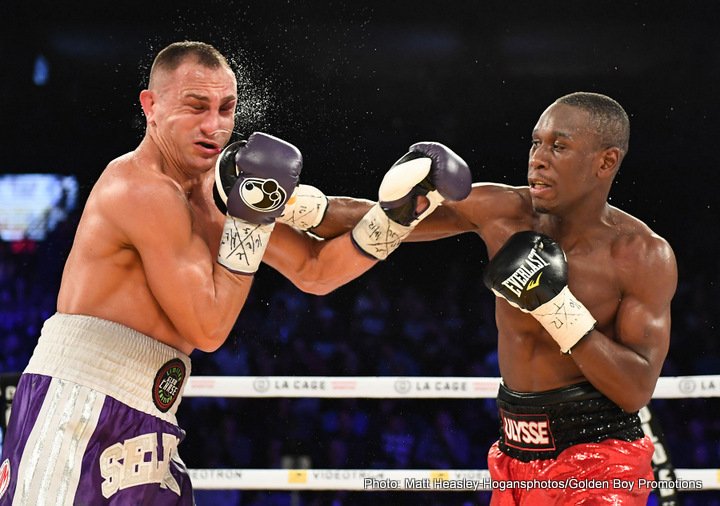 The 29-year-old Ulysse Jr. knocked Seldin down on three separate occasions in rounds 1, 2 and 3. Ulysse Jr. had the easy to hit Seldin looking shaky in rounds 8 and 10 after hitting him with hard rights to the head.

Seldin’s problem was so easy to hit due to his slow hand speed and his plodding footwork. Seldin looked like a slow heavyweight in terms of hand speed. He was just too slow to compete in the fight.

Seldin came into tonight’s right with his career looking bright following an impressive 3rd round knockout win over Roberto Ortiz on November 11th. Seldin looked devastating in that fight in knocking Ortiz down two times in round 1, and going on to win the fight by a knockout.

Things didn’t go well for Seldin tonight. Ulysse Jr. looked like Floyd Mayweather Jr. inside the ring beating up on the Arturo Gatti-like Seldin. The fight was never competitive. Seldin was lucky to have escaped the first 3 rounds without getting knocked out. Ulysse Jr. was catching Seldin with right hands when he was coming forward, and I don’t think he was tracking the punches well. They were catching Seldin cleanly, causing to stagger and fall.

Seldin was completely over-matched in this fight. I don’t think his management realized how much better Ulysse Jr. was compared to him. What might have fooled Seldin’s management into making this fight was Ulysse’s recent loss to Steve Claggett last October. Ulysse Jr. lost a 10 round split decision in that fight, and he looked bad under pressure. Tonight, Seldin couldn’t do anything with the faster and more skillful Ulysse Jr.

The way that Seldin lost tonight, I don’t know if he’s going to be go anywhere in the sport. He looked bad against a fighter that would likely be destroyed by the top 5 contenders. Ulysse has some talent, but he’s not going to beat the top dogs like Sergey Lipinets and Rances Barthelemy. You hate to say that Seldin should retire, but I don’t know where he can go in the sport. He’s so slow. I don’t think Seldin is going to be able to ever beat any of the talented contenders, and definitely not the champions in the division.