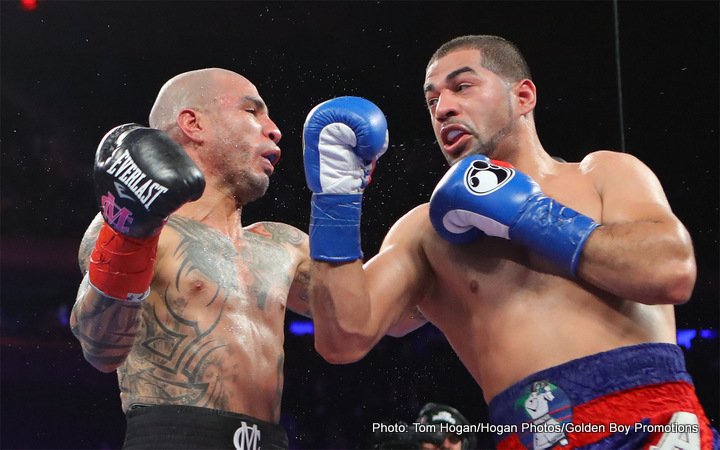 By Tim Royner: Miguel Cotto (41-6, 33 KOs) will be having biceps surgery performed on him this Wednesday to repair his left biceps, which he injured in his 12 round unanimous decision loss to Sadam Ali (26-1, 14 KOs) last Saturday night at Madison Square Garden in New York.

The fight was televised on HBO Boxing, and it was the farewell bout for the Puerto Rican star. Cotto retired after the fight. It was a planned retirement. The judged scored the fight 116-112, 115-113 and 115-113.

It was still a close fight despite Cotto suffering the torn left biceps at the midpoint of the fight. Cotto was still able to periodically throw left hooks for the remainder of the fight, but the power seemed to disappear on his punches. More importantly, Cotto threw far fewer shots after the 7th.

Ali was fighting only in brief instances in the first 6 rounds. But after Cotto’s work rate dropped off, Ali became bolder, and more willing to let his hands go. By the 11th round, Ali was attacking Cotto constantly, and he had him circling the ring and backpedaling much of the time.

The surgery will be performed on the 37-year-old Cotto in Puerto Rico on Wednesday, according to ESPN. Cotto tore his left biceps in round 7 of the fight. At the time, he was beating the 29-year-old Golden Boy Promotions fighter Ali, and it looked like he was heading to victory. However, at some point in the 7th round, Cotto injured his left arm. He threw a lot of left hooks in the round, and it’s likely while throwing one of those shots, he suffered the injury.

The victory for Ali was an upset win. He came into the fight a considerable underdog, as the odds-makers didn’t give him much of any chance against the more experienced and powerful Cotto. Ali wasn’t the first choice for Cotto to fight. He was the guy that agreed to the fight after a number of well-known fighters turned it down. Errol Spence, Mikey Garcia, Kell Brook and Danny Garcia are four of the fighters that were said to have rejected the fight with Cotto.

It appears that junior middleweights and middleweights weren’t being asked to take the fight with Cotto. Had Golden Boy asked WBC 154lb. champion Jermell Charlo, they would have likely received a yes, because he said he wanted to take the fight. Of course, Charlo likely would never agree to give options to Golden Boy on some of his future fights. That would be a deal-killer.

Golden Boy Promotions CEO Oscar De La Hoya isn’t sure if Cotto will stay retired. He says there’s a possibility he might change his mind about retiring and make a comeback.