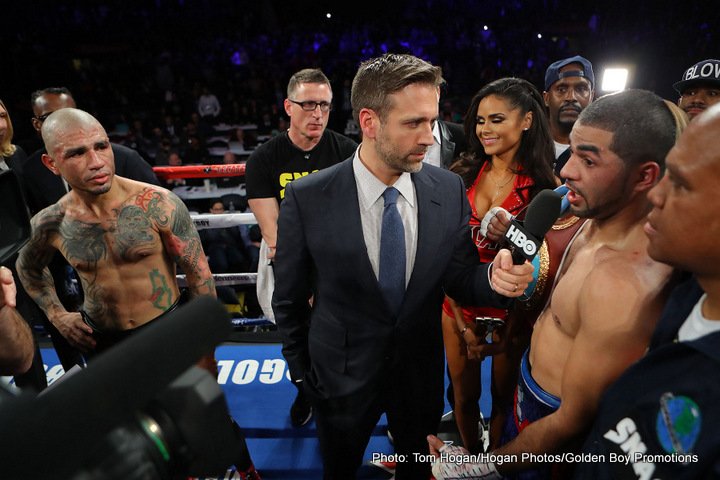 Those are strong ratings for a fight that involved Cotto facing a little known guy in 29-year-old Ali. The Cotto vs. Ali fight peaked with 1.012 million viewers. With these kinds of numbers for Cotto facing an obscure opponent, you can only imagine the ratings Cotto would have pulled in for HBO had he faced someone like Errol Spence Jr. or Danny Garcia. It’s too bad Golden Boy Promotions whiffed at getting one of those guys to agree to the fight. Asking for options on future fights isn’t the best way to find opponents.

These were No.2 overall in viewers for boxing in the U.S in 2017. That’s a big deal. With Cotto bringing in excellent numbers on HBO, you can bet that Golden Boy Promotions are going to see if he’s interested in another farewell fight. Cotto can come back for one more fight and attempt to avenge his loss to Ali or go out on a positive note by beating someone else like Adrien Broner.

The Cotto-Ali co-feature bout between WBC super bantamweight champion Rey Vargas and challenger Oscar Negrete, averaged 697K viewers with a peak of 788K. Those are respectable numbers for a super featherweight bout.

Sadam Ali (26-1, 14 KOs) went and ruined the 37-year-old Cotto’s farewell party by defeating him by a 12 round unanimous decision. Cotto’s left biceps injury he sustained in the 7th round had a lot to do with Ali winning the fight, however. Before Cotto was injured, he was in full command of the fight, appearing to win 5 of the first 7 rounds.

If not for Cotto falling apart in the last 5 rounds of the bout, Ali would have certainly come out the loser. It turned out to be great news for Ali’s promoters at Golden Boy Promotions that he won the fight, considering that his popularity was increased and he now is in the position to make a title defense against Kell Brook or Liam Smith. That means money for Ali and Golden Boy.

The defeat by Cotto saw him lose his WBO 154lb. title to Ali. That obviously was a disappointment for Cotto, but he has a good excuse for losing. His left biceps injury is the clear reason for the defeat. There’s no shame in Cotto losing by an injury. He made it a point in letting the viewing audience on HBO know that he had hurt his left biceps in the 7th.

Retirement doesn’t always mean the end for boxers nowadays. Look at Floyd Mayweather Jr. He’s retired 2 times and comeback. Cotto could do the same thing. There’s too much interest in Cotto’s career for him to end things like this. Golden Boy Promotions would obviously love to have Cotto be one of the options to face the winner of the Saul Canelo Alvarez vs. Gennady Golovkin fight next year.