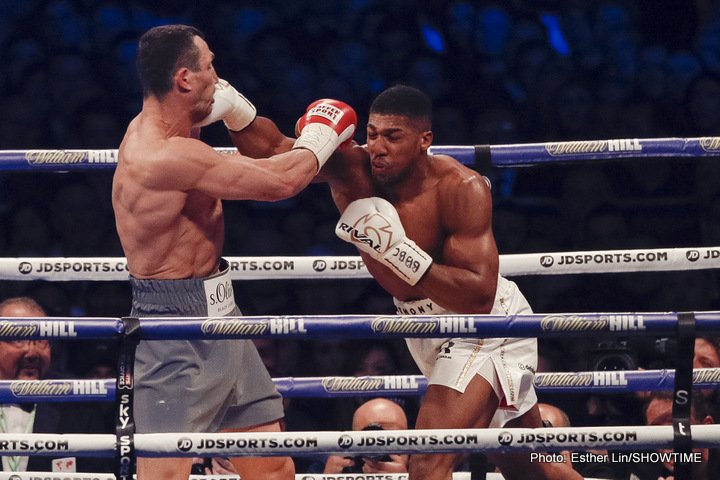 By Jim Dower: Anthony Joshua says he’ll eventually get around to fighting WBC heavyweight champion Deontay “Bronze Bomber” Wilder (38-0, 37 KOs) and David Haye (28-3, 26 KOs) at some point in the near future.

Joshua doesn’t say when precisely those fights will happen, but he does say they will take place. In the case of Haye, Joshua will need to take that fight soon for it to mean anything to the boxing public. Haye is about to turn 37 this Friday on October 13, and he doesn’t have too much more time left in his boxing career before he hangs up his gloves for good.

In fact, Haye is saying now that if he loses to Tony Bellew (29-2-1, 19 KOs) in their rematch on December 17, he’ll retire from the sport. Haye reasons that if he can’t beat a fighter like Bellew, then there’s no point in continuing his career. Joshua should plan on getting the Haye fight out of the way before he faces Wilder, considering there’s no telling what could happen with the “Haymaker” if he sticks around for too much longer in boxing. He could suffer another bad injury or get stopped again like he did in his last fight against Bellew. Haye wasn’t supposed to lose to Bellew. Going into the match, boxing fans saw the contest as a mismatch between the faster and stronger Haye against a pumped up former light heavyweight in Bellew.

”We’ve got David Feathers (Haye) and Beyonce (Deontay) Wilder, “ said Joshua to Sky News. ”I had to do it. All these guys talk about me all the time and it’s negative, always negative, but sooner or later I’ll be ramming my jab down their throat.”

Joshua is in the position to call the shots for when and where his fights with Wilder and Haye will be taking place. Haye has been waiting for a fight against Joshua since 2014. Joshua’s promoter Eddie Hearn wanted to get him seasoned initially before putting him in with Haye. But after a while, Hearn decided he wanted Haye to get some fights under his belt so he could build the Joshua-Haye fight properly. Unfortunately, hasn’t been fighting on a frequent basis since making his comeback last year. The injury that Haye suffered to his Achilles didn’t help. Until Haye proves that he can beat Bellew in their rematch on December 17, there’s no point in mentioning him as a possible opponent for Joshua to fight. Bellew-Haye 2 is a 50-50 fight in the eyes of a lot of boxing fans. Haye is the favorite, but the fight is still seen as a toss-up.

Haye may be weeded out for a fight against Joshua if he loses to Bellew. Haye would have a puncher’s chance against Joshua if the fight got made today, but we may not see that fight happen if he loses to Bellew. Haye has missed so much time with injuries in the last 5 years. Haye’s ring rust wasn’t notificable in his first 2 fights of his comeback against Mark de Mori and Arnold Gjergjai. But it was really clear in his fight against Bellew that he’s extremely rusty, and in need of more fights. Before Haye suffered a ruptured torn Achilles in round 6 of the Bellew fight last March, it was obvious that he was rusty and not well prepared for the fight.

NEWS:   Tyson Fury vs. Anthony Joshua could be dead by Monday

Wilder is campaigning for the Joshua fight in the worst way right now. He wants to face the 27-year-old Joshua immediately after he gets done with his title defense against the aging 38-year-old Bermane Stiverne (25-2-1, 21 KOs) on November 4 at the Barclays Center in Brooklyn, New York. Wilder is convinced that Joshua is running scared of him, and he’s trying to root him out by trash talking and shaming him as much as possible to force him to make the fight. It might not work. Wilder’s trashing of Joshua could harden his resolve not to make the fight with the Alabama naïve until he’s good and ready, which might be another 2 years until 2020. That’s what Wilder was talking about last week on his social media site. He’s hearing Joshua talk about not wanting to make the fight with him for 2 more years.

Wilder thinks that Joshua is trying to age him to the point where he’s no longer cogent, and a non-threat to him. Wilder wants Joshua to know that he’s not going to be aging anytime soon. Wilder didn’t look any slower in his recent 5th round knockout win over Gerald Washington on February 25th of this year. Wilder’s punching power was as good as it’s always been.

”It’s not a matter of if, it’s just a matter of when it comes to the likes of David Haye and Deontay Wilder because there has been no era of boxing where heavyweights, middleweights, welterweights haven’t come together,” said Joshua.

Wilder could make it difficult to negotiate a fight against Joshua if he insists that he come to the United States to fight him. Wilder said on Sunday that a Joshua isn’t well-known in the U.S, and he needs to fight him over there so that he can become a global boxing star. Wilder didn’t say whether I was a condition that Joshua fight in the U.S for him to fight him. If that’s the case, then there’s a chance the fight won’t get made.

”We have to fight each other and that’s just the way it’s going to go,” said Wilder to Sky Sports News.

If Joshua is going to stall for a while longer before he finally faces Haye and Wilder, he’ll probably be looking to fight these guys to keep busy:

Those are the best options for Joshua to fight to stay busy before he winds up facing Wilder and Haye.

Joshua has his own mini-test to take care of this month on October 28 against Kubrat Pulev (25-1, 13 KOs) on October 28 in Cardiff, Wales. Joshua can’t overlook Pulev, as he’s got size, experience, and more than enough power in his punches to score a knockout.