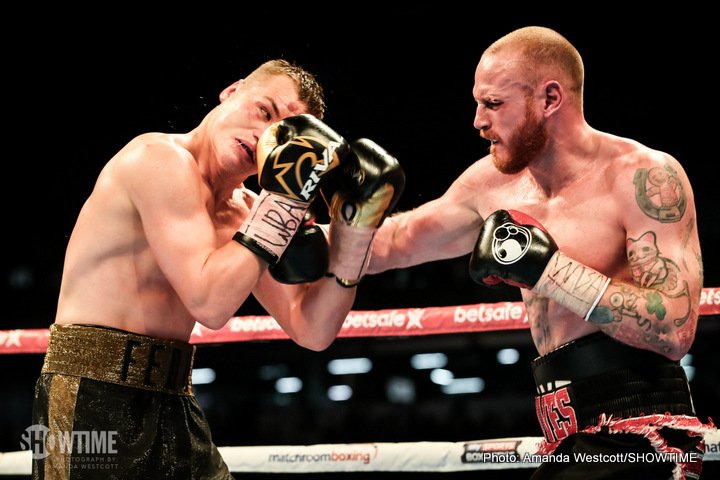 By Jeff Aranow: A win for George Groves this Saturday night against Jamie Cox could setup a big fight against Chris Eubank Jr. in early 2018 at Stamford Bridge in London, UK. Promoter Kalle Sauerland is saying that the winner of the Groves-Cox fight will meet up with Eubank Jr. in the UK in the first quarter of the year in the World Boxing Super Series semifinals match.

As of now, the SSE Wembley Arena in London is on hold for Eubank Jr. vs. the Groves-Cox winner. The arena holds only 12,500 boxing fans. However, with the huge amount of interest expected for the Groves vs. Eubank Jr. fight, Stamford Bridge could be the venue that the important clash winds up being staged at. Having the fight outdoors in the winter could be an issue though.

With weather hard to predict far in advance, it would be a risk to book Stamford Bridge for the Groves-Eubank Jr. fight during the winter months. It would be a good venue for the summer, but it’s risky to stage the fight there during the winter unless they want to chance it. They could put a large covering over the ring to prevent the fighters from getting wet, but that obviously wouldn’t help the boxing fans that would be purchasing tickets for the event. They would be stuck out in the elements, getting rained on potentially.

Stamford Bridge Stadium holds 41,631 fans. Groves vs. Eubank Jr. could easily fill that stadium and then some. It might be better to stage the fight at Wembley Stadium in London. They could possibly fill the stadium. Groves helped Carl Froch bring in 90,000 boxing fans to see them fight their rematch 3 years ago on May 31, 2014. Groves did most of the hard work in promoting that fight by giving a massive number of interviews to the boxing media.

Froch seemed to only take a passing interest in help sell the match. Froch would come unglued in the presence of Groves, who talked circles around the champion. Froch wouldn’t say much of anything when the two were put in the same room with the media. The fight still did very well, thanks to Groves. Eubank Jr. and Groves could be a huge fight. Having the contest staged at Stamford Bridge might be too conservative a move for this fight.

Groves (26-3, 19 KOs) will be defending his WBA Super World super middleweight title this Saturday night on October 14 against #9 WBA Jamie Cox (24-0, 13 KOs) in the quarterfinals of the World Boxing Super Series at the Wembley arena in London, England.

Eubank Jr. reserved his spot in the WBSS semifinals with a smashing 3rd round knockout win over Avni Yildirim (16-1, 10 KOs) last Saturday night at the Hanns-Martin Schleyer Halle, in Stuttgart, Germany. With the lights and cameras on him at center ring after the fight, Eubank called out Groves in dramatic fashion, saying ”Groves, I am coming for you. I think it’s going to be eactly the same as what we saw tonight. I’m not playing any more. I am here to dominate the tournament.”

“Chris made a huge statement and if George does the same next weekend, we are looking at a massive fight which could easily fill the stadium,” promoter Kalle Sauerland said to the mirror.co.uk. “We have had exploratory discussions regarding Chelsea and other football clubs in London. There have been outdoor fights in winter before so the January date would not prevent it.”

Unbeaten Callum Smith recently defeated Erik Skoglund to get to the semifinals of the World Boxing Super Series tournament. Smith will be facing the winner of the October 27 quarterfinals fight between former light heavyweight champion Juergen Braehmer and Rob Brant in Germany.

Eubank Jr. looked very good in beating Yildirim by a 3rd round knockout. The win was so impressive that a lot of boxing fans are starting to favor Eubank Jr. to win the WBSS tournament. Going into the tournament, fans favored the hitting Groves to take home the honors. Some boxing fans thought that Callum Smith might be the guy to win the tournament. But with Smith looking lackluster in beating Skoglund, fans are beginning to circle their wagons around Eubank Jr. as the tournament winner. What an upset that would be if Eubank Jr. ended up taking home the trophy, as he took a lot of heat last year by not signing for a fight against middleweight champion Gennady “GGG” Golovkin on September 10.

Groves will have a lot of pressure on him on Saturday night for him to beat Cox and do it in an impressive style. It’s not just the winning of the fight that is important for Groves. He also needs to look very good to help set the table for the Eubank Jr. fight in January of next year. Unfortunately for Groves, Eubank Jr. jumped out ahead of him by smashing Yildirim with ease last Saturday night. Eubank’s impressive win sets a high bar for Groves to jump over for him to do his part to get the boxing public interested in a mouth-watering fight between the two in early 2018.

Jamie Cox is going to be fighting tooth and nail to spoil Groves’ big plans by pulling off an upset. Even if Cox doesn’t win, he can make it difficult for Groves by spoiling for 12 rounds and not letting him get his shots off. Cox is good at that. He likes to take fights to the inside and make it difficult for his opponents to land their shots cleanly. Groves is going to need to be smart for him to nullify Cox’s stalling tactics. Cox will likely try and rough Groves up and get him frustrated so he can win a decision. Cox doesn’t possess the punching power for him to score a knockout of Groves. He would be foolish to try and fight that kind of fight against Groves, because he could get hurt.