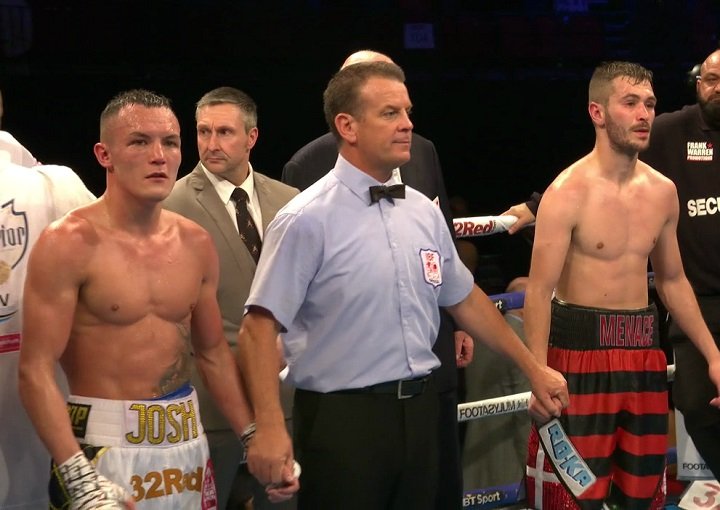 Warrington, 26, knocked Ceylan down twice in the 10th round with big shots. After the second knockdown of Ceylan, the referee Michael Alexander stepped in and stopped the fight. The official time of the stoppage was at 1:43 of round 10.

It was a good win for Warrington, but it was against a guy that didn’t deserve the high ranking the IBF had for him at No.6. Ceylan is a good bottom level fringe contender quality fighter, but not a top 10 guy. If Ceylan was a true No.6 fighter, he probably would have beaten Warrington.

”It means so much to me after all this time waiting,” said Warrington after the fight in talking about finally being in position to fight for a world title. “I know I had him hurt early on. I went for it a little too soon. I wanted to win the fight in style. I was hurting him. I should have taken a step back. I took a lot of punches by being erratic and wild,” said Warrington.

Warrington isn’t the type of fighter that can shutout an opponent completely. All of Warrington’s opponents land on him, mainly because he can’t punch, and they have an easy time getting in punches distance to land their shots. The only reason Warrington hasn’t lost yet is because he hasn’t een fighting good opposition during his Warrington has been fighting guys like Patrick Hyland, Kiko Martinez, Hasashi Amagasa, Joel Brunker and Rendal Monroe instead of the good fighters that could potentially beat him like Quigg, Frampton, Diaz Jr., Gary Russell Jr. and Oscar Valdez.

Ceylan, 28, fought well enough to win just round 2. He was too slow with his plodding style of fighting, and his slow hand speed. Warrington could take advantage of Ceylan’s lack of hand speed and power by nailing him with had shots in each round to get the better of him.

This was a perfect opponent for Warrington to fight in an IBF title eliminator, as if the IBF had ordered him to fight #2 IBF Scott Quigg, Carl Frampton or Joseph Diaz Jr., he likely would have been knocked out by all 3 of them. Those guys are all arguably much better fighters than the light hitting Warrington. Ceylan was the ideal guy, because he really didn’t deserve the ranking that the IBF had given him. There are several fighter fighters in the IBF’s rankings than him.