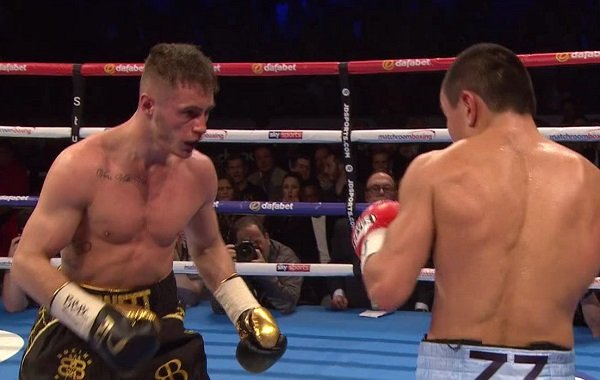 By Scott Gilfoid: IBF World bantamweight champion Ryan Burnett (18-0, 9 KOs) won a wide 12 round unanimous decision Zhanat Zhakiyanov (27-2, 18 KOs) on Saturday night in their unification fight at 118 lbs. in front of a large pro-Burnett crowd at The SSE Arena in Belfast, Northern Ireland.

Using constant clinching, Burnett tied the 33-year-old Zhakiyanov frequently in each round to prevent him from throwing shots. On average, Burnett tied Zhakiyanov up in at least 10 clinches per round and as high as 18 clinches. The referee Howard John Foster stood and watched and didn’t take points off from the 25-year-old Burnett for his frequent holding and grappling. The referee did warn Burnett on a number of occasions about his habit of sticking his head into the face of Zhakiyanov while clinching him, but he didn’t take points away.

The judges scored it 118-110, 119-109 and 116-112. Boxing News 24 had Zhakiyanov winning 115-113. I don’t know how the judges saw Burnett beating Zhakiyanov by a 10 rounds to 2 and 9 rounds to 3 score. Those scores were laughingly bad. That was like the 118-110 score turned in by judge Adelaide Byrd in favor of Saul Canelo Alvarez in his fight against IBF/IBO/WBA/WBC middleweight champion Gennady “GGG” Golovkin on September 16. How 2 judges could see Burnett beating Zhakiyanov by such wide scores is beyond me.

There was no way that Burnett could win by those scores with him clinching like he was doing. Zhakiyanov was really asking for it by going into Burnett’s home country for the unification fight instead of insisting on the fight taking place in a neutral venue. That was a mistake on Zhakiyanov, because he should have known better than to put himself in a position where he would get these type of scores. Like I said, I had Zhakiyanov winning 7 rounds to 5. He landed the harder and cleaner shots all throughout the fight. I couldn’t tell how good Burnett was because he spent so much time clinching rather than fighting.

Burnett didn’t do enough actual punching in the fight for him to deserve the victory. Burnett did a fine job of holding though. He was clinching at a high rate, showing good form with holding and mauling. But there were very little actual punches of note from Burnett. He was clinching, and then throwing 1 or 2 shots while still holding. When there was separation between the two fighters, Burnett, with his hands down by his sides, would come forward, throw a jab or a right and, and then immediately grab Zhakiyanov in a clinch. It was the old punch and grab technique from Burnett.

Obviously, this was a strategy that Burnett’s trainer Adam Booth had come up with for the fight. For Burnett to fight in such a terrible spoiling manner, it suggests that his trainer Booth didn’t believe him capable of beating Zhakiyanov by fighting him. It’s too bad because Burnett might have been able to beat Zhakiyanov by boxing or slugging with him. We’ll never know though, because he chose to spoil for 12 rounds by constantly holding. I personally though Burnett should have had points deducted for his nonstop clinching, especially in round 12, when he clinched Zhakiyanov 18 times in the round. It’s very hard to clinch 18 times, but that’s what Burnett did. The entire12th round saw Burnett holding onto Zhakiyanov to keep him from getting his shots off.

”I thought Zhakiyanov,” said his trainer Ricky Hatton after the fight. ”I thought the scores were shocking.”

I agree with Hatton. The scores were shockingly bad. I don’t know what fight the judges were watching but it wasn’t the one that took place inside the ring tonight.

Burnett’s promoter Eddie Hearn said after the fight that he’s going to look to setup another unification fight against the winner of the November 4th rematch between WBA World bantamweight champion Jamie McDonnell and Liborio Solis or WBO 118 lb. champion Zolani Tete. It’s more likely that Hearn will match Burnett against the McDonnell vs. Solis winner. Those 2 are fighting each other in a rematch because McDonnell won his own VERY controversial 12 round unanimous decision win over Solis in their first fight on November 12, 2016. The judges scored that fight 116-112, 115-113 and 117-111 for McDonnell. Boxing News 24 saw Solis winning an easy 10 rounds to 2 win. Hearn can make the Burnett vs. McDonnell fight without any problems. I would favor McDonnell over Burnett, but after watching tonight’s fight, I wouldn’t give McDonnell any chance at all of winning. The two of them will likely fight each other in Belfast, and I don’t see McDonnell having much of a chance, especially if Burnett clinches all night long like he did against Zhakiyanov.

I wasn’t impressed at all with Burnett. I’ve seen Burnett fight many times in the past, and he never held nonstop like he did tonight. It’s a shame that he or his trainer Booth felt that he needed to grapple all night long for him to have a chance to win. Burnett is better than that. If Burnett can’t win without gaming the system by clinching excessively, then what kind of fighter is he?