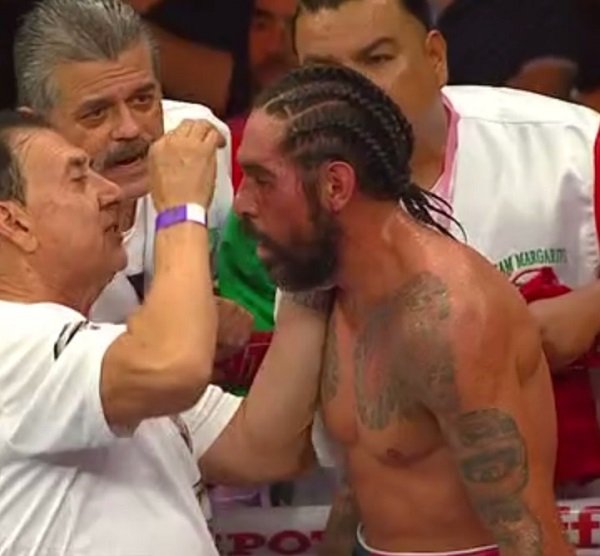 Margarito had all he could handle beating the journeyman Carson Jones by the controversial scores 68-64, 67-65 and 67-65. The fight was stopped at the end of round 7 because of a cut Margarito had suffered in round 2 over his right eye.

Jones fought well enough to win rounds 4, 5, 6 and 7. However, Jones lost a point in round 5 with him accidentally head-butting Margarito. Jones dominated the action, but the point deduction made it a 9-9 even round. The fight should have been scored a draw instead of a win for Margarito, as he clearly lost rounds 4, 6 and 7. Jones had Margarito hurt in the 7th round in the last moments of the round. Margarito was backed against the ropes, taking withering fire from Jones as the round ended.

“Jones was very dirty,” said Margarito to fightnews.com. “The whole fight he gave me head butts and from the second round the cut constantly affected me. I was telling the referee to watch for his head butts, but in the end justice was done,” said Margarito.

Margarito was right about Jones leading with his head. Jones was doing that all throughout the fight. Whenever Jones would come in close, he would lower his head and there would be contact with the face of Margarito. In round 2, Margarito was cut badly from a clash of heads. Jones’ head him right on his right eye, causing a bad cut. Margarito didn’t have the style of fighting to avoid getting head-butted from Jones. If Margarito could jab and move, then Jones wouldn’t have clashed heads with him so often. The problem was, Margarito needed to come forward to land his uppercuts and hooks, which are his favorite weapons in his arsenal.

”I will continue in my goal to seek a fight with Miguel Cotto,” said Margarito.

Margarito looked so bad against Jones, it’s hard to see him being taken seriously by any top fighter in boxing. Cotto isn’t even a top guy. He’s a belt holder, but not one of the true talented fighters at 154 in my opinion. You can’t put Cotto in with Erislandy Lara, Jermell Charlo or Jarrett Hurd and expect him to come out with a victory. Those guys would likely maul Cotto, and obliterate him quickly. Margarito is worse off than Cotto when it comes to what he has left of his physical skills.

Margarito will soon need to give up on his dream of fighting Cotto one more time, as the Puerto Rican fighter will be disappearing into retirement after December.

It would be forlorn for Margarito to still be calling out Cotto once the Puerto Rican fighter retires from boxing at the end of December. Margarito would be better off calling out someone like David Lemieux, Errol Spence Jr. or Terence Crawford. At least those guys aren’t retiring in December like Cotto. If Margarito is going to have a goal for him to get a nice payday, he should put his attention on trying to fight someone that isn’t on the verge of retiring like Cotto.