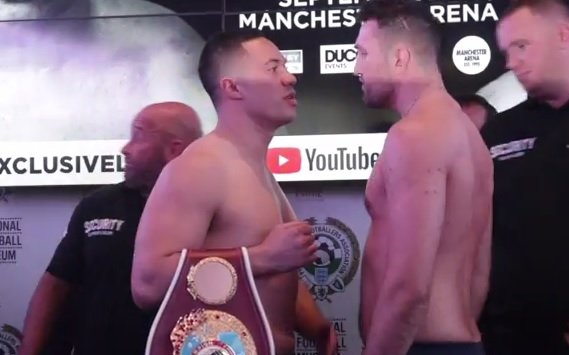 By Scott Gilfoid: WBO heavyweight champion Joseph Parker (23-0, 18 KOs) weighed in 11 pounds more than his opponent #1 WBO Hughie Fury (20-0, 10 KOs) in weighing in a 245 lbs. on Friday at their weigh-in for their fight this Saturday night at the Manchester Arena in Manchester, England. The only excitement about the weigh-in was Hughie shoving Parker during the face off. It looked like it was a planned thing unfortunately.

Despite being taller at 6’6” than Parker, Hughie weighed in at 234 lbs. The weight for the 23-year-old Hughie is pretty much the norm for him, as he doesn’t have much muscle on his lean frame.

During the face off, Hughie jawed at the 25-year-old Parker, pointing at him repeatedly in an animated way, as if he were ready to start swinging. Hughie gave Parker a little push right when the two fighters were about to finish their face off. This caused some of the fighters and team members got into a clash. It got a little bit of excitement for what was a very boring weigh-in.

It was a real tremendous change from the way the 2 heavyweights had gotten along peacefully during the other head to head meetings at the press conferences with one another. You can assume that the boring fight needed some fireworks, so this one way for Hughie and Parker o drum interest in a fight that has failed to attract a great deal of attention.

I doubt that the boxing fans that are sitting on the fence deciding whether it’s worth it to waste an evening watching Parker fight Hughie will decide to watch the fight based on a skirmish with no names. It would have been better if the beef involved Hughie and Parker rather than team members with no name or no real meaning to the actual fight. I’m just saying. You got to do more than that to get boxing fans interested in watching Parker fight an inactive guy like Hughie.

Parker is likely going to go after the light hitting Hughie from the opening bell on Saturday night, looking to brain him straightaway. Hughie hasn’t fought in ages since early 2016, and he’s shown stamina issues when he’s been forced to fight hard. If Parker can set a fast pace on Saturday night, he could get him out of there quickly. Hughie gassed out after 6 rounds in his last fight against journeyman Fredi Kassi in April 2016, but he was saved by the ringside doctor stopping the fight in round 7 due to a cut over his left eye. The cut came from a clash of heads that the exhausted Hughie appeared to initiate. I’m hoping we don’t see Hughie get tired against Parker and end up with another fight-stopping cut from a head-butt. I wouldn’t be surprised if that’s what happens, but I’m hoping Hughie fights to the bitter end rather than turn into a Billy Goat when things start looking bad for him.

Hughie is completely outgunned against Parker. The power just isn’t there for Hughie. He’s never developed any punching power despite being a big guy at 6’6”. Hughie is kind of like Tyson Fury in terms of punching power. Hughie throws his punches straighter than Tyson Fury, but there’s no power there whatsoever. He lands and nothing happens. The absence of muscle on Hughie’s frame could be one reason for his lack of power. He’s kind of scrawny looking for a heavyweight. Even at 6’6”, Hughie has a slight paunch, as if he’s carrying around excess baggage around his midsection. If you took away the fat that Hughie is carrying, he probably would weigh no more than 215 lbs. That’s just way too thin for a 6’6” heavyweight, which is why he can’t punch for the division. He’s tall, but he’s not a muscle 234 lbs. He’s more like a tall guy carrying around extra weight that artificially puts him at 234. I don’t think Hughie will ever be a puncher. If he hasn’t found any power at 23, he’s never going to be a puncher.

One of the reasons why there isn’t much interest in the Parker for Fury fight is the fact that Hughie has done zero to earn the fight. Other than being related to former heavyweight world champion Tyson Fury, Hughie’s best wins of his 4-year pro career have come against journeyman Fred Kassi, George Arias and Andriy Rudenko. Hughie ran from Rudenko for 10 rounds in an ugly to watch fight on February 21, 2015. Hughie won a 10 round unanimous decision, but it was one of the dullest fights I’ve ever seen. Hughie used the old punch and grab technique exclusively. When Hughie wasn’t holding, he was running from Rudenko. It was pure spoiling for 10 rounds. I couldn’t give Hughie the win on my scorecard, because I thought he should have been disqualified for holding. That’s how Hughie fights though. It’s real ugly.

Hughie hasn’t fought in 1 ½ year, and for some reason the World Boxing Organization hasn’t removed him from their top 15 rankings. I’m trying to imagine another sport where a team doesn’t compete for close to 2 years and then they still got to the championship game. They don’t even do this kind of thing in MMA. You got to stay active if you want the big fights. I think the WBO needs to make some changes with the way that they rank their fighters, because putting inactive fighters like Hughie Fury at No.1 is just off putting. The WBO recently ranked junior middleweight Miguel Cotto at No.1 despite him not having fought since 2015. Cotto even fought for the WBO’s 154 lb. title against Yoshihiro Kamegai, who the WBO for some reason had rated above Erickson Lubin. Yeah, I do not understand rankings like that. With Hughie’s inactivity and the fact that he’s never beaten a good heavyweight during his 4-year pro career, I think he shouldn’t have been ranked in the top 15, let alone at No.1 by the WBO. That’s just me though. I’m practical. When a fighter is sitting on his backside for nearly 2 years being inactive, I don’t think he deserves to be rated No.1 by a sanctioning body, and I sure as heck don’t think the guy should be given a world title shot as a mandatory challenger.

Hughie will have the hometown advantage over Parker in fighting in Manchester. Hughie’s promoter did a swell job of getting the Parker fight staged in the UK. That potentially good be bad news for Parker if the fight goes to the scorecards. Hopefully we don’t see the Parker-Fury fight marred by bad judging on Saturday like we saw with last Saturday night’s fight between Saul Canelo Alvarez and Gennady Golovkin. I think it would be a black eye for boxing to have another controversial outcome after last Saturday. Parker, 6’4″, is going to need to be on his J-O-B if he wants to make sure the judges don’t have a say so in the final results of this fight. That means Parker should be ready to chase Hughie around the ring if he uses his normal hit and run style of fighting. That’s how Hughie fights. He lands a shot and then dashes away to safety. You can call it boxing, but it’s ugly for me to watch. Hughie also likes to hit and hold. He does a lot of that. Parker will need to be ready for Hughie to come crashing in to grab him in a clinch each time he throws a power punch.

Believe it or not, Parker vs. Fury is pay-per-view.

Other weights on Saturdays Parker vs. Fury card: 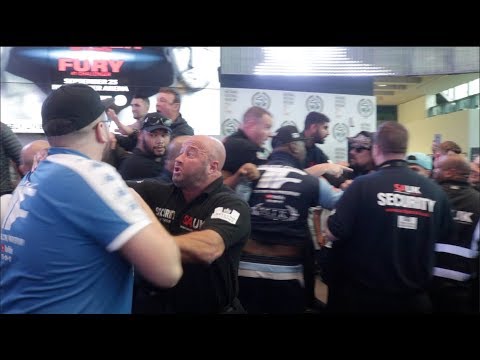 Loeffler says Golovkin vs. Cotto is ideal fight for Dec. »