Loeffler says Golovkin vs. Cotto is ideal fight for Dec. 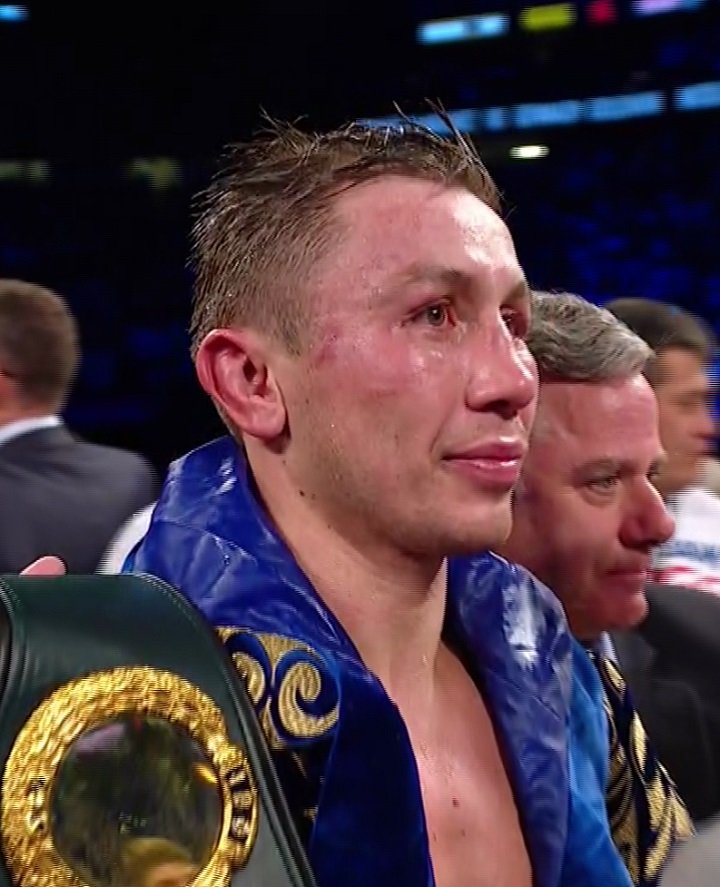 By Dan Ambrose: Gennady “GGG” Golovkin vs. Miguel Cotto would be a great fight for December, says Triple G’s promoter Tom Loeffler. Right now, they would like to put together a rematch against Saul “Canelo” Alvarez, who was given a HIGHLY questionable 12 round draw against GGG last Saturday night in Las Vegas, Nevada. However, Canelo wants to sit and do nothing for the next 8 months until May of 2018.

Golovkin doesn’t like to sit idle for prolonged periods. For Golovkin to give up almost a year of his career while waiting for a much younger fighter in 27-year-old Canelo, it doesn’t make a lot of sense. Canelo is young enough to get back into the ring to fight the 35-year-old Golovkin if he wanted to.

“A legend like Cotto is a shoo-in for the Hall of Fame,” Loeffler said to skysports.com. “This is the type of fight that would motivate Gennady. Gennady’s defence is vastly underrated. He’s the one coming forwards and pressing the action but [after the Canelo fight] it didn’t look like he was in a 12 round fight. No swollen or black eyes, just a few scratches.”

It would be up to Cotto whether he would want to take a risky fight against Triple G. At 5’7”, Cotto is quite small for a fight against a true middleweight like Golovkin. If Cotto insists on a catch-weight handicap against Golovkin to boil him down to 156 or lower, he might be met with deaf ears. Golovkin said he would only drop down in weight for a fight against Floyd Mayweather Jr. He feels that Cotto and Canelo don’t deserve handicaps in order for him to fight them. But that could be a deal-breaker if Cotto insists on a handicap for his weight against Triple G. I don’t see it happening.

If Cotto is fine with fighting Golovkin at the full weight for the middleweight division, then a fight between them could be made. The boxing world would like to see them face each other. The options for Cotto aren’t do good for December. If he doesn’t face Golovkin, he would be stuck fighting lightweight Mikey Garcia or former IBF middleweight champion David Lemieux. Mikey Garcia is a good fighter, but he’s not well-known with the casual boxing fans.

If Cotto fights Garcia, he’ll be looked at as a cherry picker, because he would be fighting someone that would be moving up 3 divisions to fight him at 154. If the idea is to make as much money as possible for his final fight, Cotto would be making a mistake fighting Mikey Garcia on HBO PPV. It won’t sell. Cotto would be better off fighting Golovkin or Canelo if he could get the red-haired Mexican fighter to get back into the ring to fight him in December.

With the payday that Canelo received for the Golovkin fight, which would be more than $50 million, there’s no real incentive for him to get up off the couch and start fighting again so soon. Besides, Canelo will be seen as ducking Golovkin if he faces Cotto. Golovkin would be viewed differently by the boxing fans, as he wants the rematch with Canelo right away, but he’s powerless to force him to get back into the ring to fight him again in 2017. Canelo is the A-side, and the rematch clause works in only one direction and that’s for Canelo and not Golovkin.

Cotto, 36, will be retiring at the end of December, so this would be the last fight of his career if he faces Triple G. It would be a big enough fight for the two of them to face each other on HBO PPV. Golovkin has fought three times on HBO PPV in fights against David Lemieux, Danny Jacobs and Canelo. Cotto’s trainer Freddie Roach said recently that he’d like to see him fight Canelo or Golovkin.

Roach wanted Cotto to fight the winner of the Canelo-Golovkin fight. Since there wasn’t a winner, Roach would like to see Cotto face either of those guys. If Canelo is truly serious about not wanting to fight until May of 2018, then that takes him out of the running for a fight against Cotto. However, Cotto is working with Golden Boy Promotions now, and they might not like the idea of letting him face Golovkin in December. Could Golden Boy block Cotto vs. Golovkin?

It’s unclear. They could definitely let Cotto know that they would rather he not face Golovkin, who they supposedly want to remain inactive until a rematch against Golovkin can get made next year. Golden Boy president Eric Gomez said this week that he would prefer that Golovkin not fight again until a rematch with Canelo can get made, because he’s worried that he could lose or suffer an injury. But it’s not good for a 35-year-old Golovkin to throw away nearly a year of his career waiting for a younger fighter like Canelo to decide when he finally wants to fight again. It’s bad business for Golovkin to lose time on his career, especially after the controversy surrounding his 12 round draw against Canelo.

It works for Canelo and Golden Boy if Golovkin doesn’t fight in December, because it keeps inactive and prevents him from getting more popular by adding Cotto’s scalp to his resume. If Golovkin can’t a fight against Cotto, then Loeffler could try and put together a unification fight against WBO middleweight champion Billy Joe Saunders. He’s talked a lot about wanting to fight Golovkin recently, but he failed to agree to a rematch when Loeffler tried to make the fight last year. Will Saunders back out again? We’ll see if Loeffler tries to put that fight together.

“Absolutely, if there’s a big fight that makes sense we would consider it,” Loeffler said. “We’ve been trying to fight Billy Joe Saunders for a while. But Gennady has crossed over into being one of the most marketable boxers in the US.”

It’s thought that Saunders is waiting for the highest bidder for a fight with him. It’s doubtful that Saunders will readily agree to a fight with Golovkin until he’s given an offer by Golden Boy for a fight against Canelo, who brings a lot of PPV money due to him being the No.1 attraction in boxing in North America. Canelo might not be the most talented fighter at 160, but he’s clearly the most popular. If Canelo decides he doesn’t want the rematch with Golovkin yet, he can jump in front of him to take the fight with Saunders.

Canelo is technically Ring Magazine’s middleweight champion still after beating Miguel Cotto in 2015. The Ring belt was on the line last Saturday in the Golovkin fight, and Canelo dodged a bullet in losing the belt because of the way the judges scored the fight. Canelo vs. Saunders would bring in good numbers in the UK on PPV. Canelo would take heat for not fighting Golovkin in an immediate rematch, but he’s used to that. After dodging the fight against Golovkin for 2 years, Canelo is well accustomed to being criticized for him seemingly waiting for the Kazakhstan fighter to age.

“He said he could fight for another five years,” Loeffler said. “Gennady’s style of punching power doesn’t diminish, like we saw with George Foreman. The power-punching is [the attribute] that goes last, with an older fighter.”

Golovkin needs to throw more sustained combinations if he wants to knockout the better fighters like Canelo, Jermall Charlo and Danny Jacobs. Just throwing jabs and single power shots isn’t going to work. You’re not going to knock those guys out with single right hands and left hooks. You’ve got to unload with a sustained flurry of shots without stopping. I don’t know if Golovkin can do that. If Golovkin doesn’t change the way he fights, he’s going to be involved in a lot of decision fights from this point in when facing the better fighters in the 160 lb. division.

Golovkin looked as powerful as always last Saturday night. The power was the same. Golovkin didn’t have a stationary target for him to get his shots off against. He also wasn’t attacking Canelo the way that he’s done against his other opponents. If Golovkin had steamed ahead and gone all out for the knockout, either he or Canelo would have been knocked out. I tend to think it would have been Canelo that ended up on the canvas, but we’ll never know for sure. Golovkin boxed Canelo rather than slugged it out with him. Golovkin used the Floyd Mayweather Jr. blueprint to beat Canelo by jabbing him from the outside. But in this case, the judges failed to give Golovkin the win.

Danny Jacobs not likely to fight on Wilder-Ortiz card »