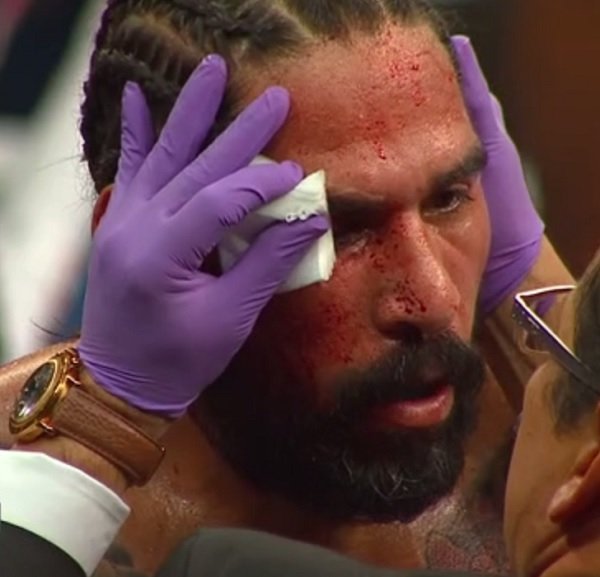 By Allan Fox: Antonio Margarito (41-8, 27 Kos) kept his remote hopes for a third fight against Miguel Cotto alive with a 7th round technical decision win over journeyman Carson Jones (40-12-3, 30 KOs) on Saturday night in a scheduled 10 round fight at the Gimnasio Manuel Bernardo Aguirre, in Chihuahua, Mexico.

Margarito, 39, suffered a cut to his right eyelid in the 2nd round from a clash of heads and this eventually led the fight being stopped in round 7. The cut appeared to come from a punch, not a clash of heads, but referees sometimes make mistakes.

It went to the scorecards and Margarito was given a 7th round technical decision. The scores were 68-64, 67-65 and 67-65. It was a close enough fight to be scored a draw.

The scoring was generous for Margarito, but it’s not surprising. He was the A-side fighter in competing in his home country against a journeyman.

Round 4 was stopped early just when Jones was landing well. It looked like the timekeeper got confused and stopped the round early. It just happened to be a round in which Jones was working a hurt looking Margarito over in the moments before the round ended prematurely.

In a very questionable call, Jones was penalized a point in round 5 for leading with his head. He had Margarito stunned in the round. It was kind of difficult to believe that Jones would be penalized in a round where he was doing well. That’s how it goes for the visiting fighter

In round 6, Jones landed some nice shots to the head of Margarito and appeared to get the better of him in that round. Margarito was tired and he had nothing on his shots. Margarito was landing slow uppercuts and body shots, but he didn’t have any power or speed. He was never fast to begin with during the prime of his career, but he looked a lot slower tonight than he’d been years ago. The power was gone, and he didn’t have the incredible work rate that he once had in his prime when he was capable of throwing 100 punches per round for an entire fight Margarito would be lucky if he threw 50 punches per round tonight

Jones had a lot of tape issues throughout the fight for some reason. He ended up using some strange duct tape that you normally see used for taping up boxes. It’s hard to believe his trainer didn’t have some good tape. I guess that’s how it is when you’re a journeyman fighter.

Jones fought well enough to win rounds 5-7. Round 5 appeared to be a 9-9 round due to the point deduction of Jones. Margarito was exhausted by the 7th. If not for the fight going to the scorecards, he likely would have been stopped by Jones. Margarito was laboring in rounds 5 through 7, and Jones had taken over the fight with his youth, energy and combination punching.

Jones needed to be more dominant to win on the road against a home fighter like Margarito. The fight was there to be won for Jones, but he wasn’t quite dominant enough to get the nod. Had the fight taken place in the U.S, I think Jones would have gotten the nod. Margarito looked sloppy and slow. He did show some flashes of the fighter he’d once been when he was throwing body shots, uppercuts and nice jabs.

Margarito was boxing Jones at times, and doing really good job of it. Margarito’s boxing ability is extremely underrated. If he focused on that part of his game, he would make his fights a lot easier. But he still fancies himself as a slugger, and he tries to slug it out too much. He doesn’t have the work rate that he once had otherwise he’d still be very good at knocking guys out.

You could maybe argue that Margarito had done enough to have a small lead at the end of the fight, but he was clearly very tired in the last 3 rounds of the fight. I think it would have ended badly for Margarito if he had fought rounds 8 through 10. He was too tired. What Boxing News 24 saw tonight was a good 2nd tier performance from Margarito. He didn’t show world class talent against Jones. If Margarito had been in the ring with a good 154 lb. fighter like Jermall Charlo, Erickson Lubin or Jarrett Hurd, he would have been knocked out easily.

Margarito doesn’t have that kind of talent at this point in his career. He shows brief glimpses of the fighter he once was at times, but he’s lost so much from his game due to age, inactivity and ring wear. He’s never going to be the fighter that he once was again. That fighter is gone forever. Even If Margarito dedicated himself completely to boxing and fought frequently, he’s not going to be able to get back to the fighter he was in the past.

Margarito can now call out Cotto with his win over Carson Jones. Cotto will obviously continue to ignore Margarito, and keep his attention on trying to get the winner of the Saul Canelo Alvarez vs. Gennady Golovikn fight. Cotto wants to get one last payday before he retires. Margarito is not the guy that Cotto wants. It would be an easy fight for Cotto at this point, but he wants to make money for his last fight in December. Canelo or Golovkin gives Cotto the best chance for a final big payday.

A good fight for Margarito would be against Yoshihiro Kamegai, the fighter that Cotto recently beat by a 12 round unanimous decision last Saturday night to claim the vacant WBO junior middleweight title. Margarito and Kamegai would be a fun fight. There would be nothing to prove. It would be 2 limited sluggers trading bombs for as long as it lasts. Margarito vs. Kamegai would be a pick em fight.

Margarito’s cut will likely keep him out of action for the remainder of 2017, which is bad news for being that he wants to face Cotto in a rubber match. Cotto says he’s retiring in December.

Margarito’s cut removes any chance that he would have had to fight Cotto. Even if Cotto wanted to fight Margarito again, he couldn’t unless he was willing to wait for his cut to heal and fight him in 2018.