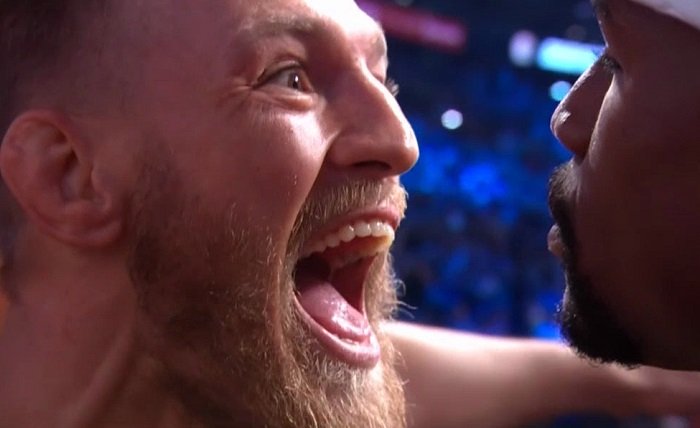 By Yannis Mihanos: For one and rare times in his lengthy career Floyd Mayweather Jr. has experienced defeat. The defeat has happened before the match in all the pre-talks and interviews leading up to his fight tomorrow night against charismatic Conor McGregor at the T-Mobile Arena in Las Vegas, Nevada.

McGregor has outlasted and outmatched any of the promotional antics of Mayweather. McGregor appears to be a natural in that department. He talks like no other Mayweather has ever faced.

The presence of McGregor in this sports bonanza has turned the eyes from all parts of life. This has been a hell of a great show with many highlights included. Even Paulie Malignaggi has experienced some fame even if it was mostly ridicule.

“I don’t care about his defensive capabilities but I have watched how other boxers attack him and how it changes from the early part to the later part of the fight,” said McGregor. “I know exactly how to break him down. I believe I’ll knock him out early. One or two rounds and he’s done. If he recovers from being knocked down, I’ll toy with him. But I will have the ability to put him away in two rounds.”

In fact, if there was a boxing belt given before a match it would be easily handed to Conor by unanimous decision. It’s clear that Conor has upset Floyd in many levels and that can be good or bad.

In this clash IQs, the tide has turned towards the side of McGregor. At times McGregor has humiliated and angered massively Mayweather. Now I wish I could say that this is all over but it isn’t. The fight in the ring hasn’t happened yet.

People respond to certain triggers and depending on the triggers you can see the best or the worst of them.

So far, the triggers have worked perfect for McGregor. Will he walk the talk? Will he complete the upset that no one expected? Or will he be no better than any of the previous Floyd’s opponents? Hard to say without biasing the article and I think I have done already enough.

One thing I know for a fact is that there are not many who can have this kind of background or experience to know well both sports. Remember, this is the first time that a famous UFC fighter has accepted to fight a boxing world champion.

So, there is little room for comparisons, even many boxing veterans and analysts that spend so much time talking and analyzing, lack the complete package and knowledge. Usually they know more of one side.